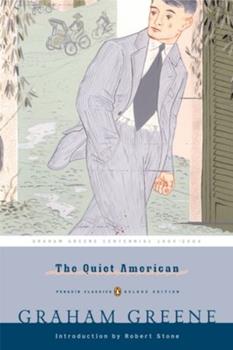 Graham Greene's classic exploration of love, innocence, and morality in Vietnam I never knew a man who had better motives for all the trouble he caused, Graham Greene's narrator Fowler remarks of Alden Pyle, the eponymous Quiet American of what is perhaps the most controversial novel of his career. Pyle is the brash young idealist sent out by Washington on a mysterious mission to Saigon, where the French Army struggles against the Vietminh guerrillas...

Published by Thriftbooks.com User , 14 years ago
A classic whose truth seems not to fade: "I hope to God you know what you are doing here. Oh, I know your motives are good, they always are... I wish sometimes you had a few bad motives, you might understand a little more about human beings. And that applies to your country too, Pyle." This Vintage edition has an introduction by Zadie Smith: "There is no real way to be good in Greene, there are simply a million ways to be more or less bad." There is a very good movie adaptation of this book with Michael Caine playing Fowler.The Quiet American

Published by Thriftbooks.com User , 20 years ago
I'd heard of this book for years just as "Greene's Vietnam novel," without knowing when it was written or anything else about it. So when I saw it in a bookstore in Saigon at the conclusion of a three-week tour of Vietnam in 1997, it seemed appropriate to snap it up, and I started reading it in a cafe not too far from the street where Fowler had his flat (now renamed, of course, but I don't remember what the new name is). So maybe that's why it had such an intense effect on me, but I was absolutely stunned by it. It really pulled me into a feeling of what it might have been like to be in Vietnam in 1954, and the characters were clearly portrayed (if not always nice). Among the fascinating things is the (relatively) sympathetic treatment of Pyle. Greene makes it clear that by any measure of "private" morality, Pyle is a much better person than Fowler, but in his political actions he is utterly, totally, completely wrong -- not from bad motives, but because he does not know what he is doing. AFter I finished it I looked at the copyright date and was stunned again to see that it was written in 1954, before the French got out of Vietnam. Hell, yes, it's a prophecy of what would happen with the US involvement there. I'd love to get my hands on whatever crystal ball Greene was using, and I wish he was still around so he could write an Afghanistan novel.

As superbly written as it is insightful

Published by Thriftbooks.com User , 22 years ago
Only the great Graham Greene could have written a story that is as wry and understated as it is prophetic. "The Quiet American" captures several different attitudes during Vietnam's transition from French colonial occupation to American "involvement". In this novel the French do what they do best, namely they undertake a hopeless struggle and experience painful defeat. The Americans enter the scene with grandiose plans, tons of money, and utterly no sense of reality. The Vietnamese are, of course, hard-edged and practical, while the lone Englishman-God bless him-is the epitome of dying yet dignified colonialism.For those of you who haven't read the book, its both an odd love story and a metaphor for American involvement in Vietnam. The hero, Fowler is a washed up, middle aged, English war correspondent, content with his opium pipe and his Vietnamese mistress, Phuong. His world is gradually disrupted by the arrival of an American covert operative named Pyle who is both a zealous ideologue and a naïve optimist. Things get complicated when Pyle steals Phuong away from Fowler, yet attempts to remain friends with him. The normally indifferent Fowler soon becomes morally repulsed by Pyle's seemingly well intended terrorist activities, and gradually becomes politically involved. By the time Fowler helps to engineer Pyle's murder it is unclear even to him whether he is doing so to help the Vietnamese people or to win Phuong back."The Quite American" explores several different concepts. Like many of Greene's novels and short stories it examines the peculiar morality of love. Fowler and Phuong form a strange symbiosis. Fowler is estranged from is English wife, and is old enough to be Phuong's father. His affection for her is unabashedly sexual and certainly not made for day time TV in the U.S. Phuong's attachment to both Fowler and Pyle is based more on practical reasons than on love. Greene never passes judgement any of the trio. And when Fowler wins Phuong back in the end, he is left-like so many of us-with a lingering doubt about his motives and actions.Equally interesting is Greene's exploration of the politics of Southeast Asia in the 1950s and particularly, the shifting balance of power from European colonialism to American military and economic involvement. Pyle, who is probably based on the real life American operative, Landsdale devoutly worships the books of an intellectual whose thinking bears strong resemblance to that of George Kennan. As the French wrap up their losing streak, the Americans enter the scene with blind stupidity, you can't help but cringe at disaster to come.I loved this book for its intelligent grasp of love and politics. Like many of Greene's other works, this one contains a genius for characterization.

Published by Thriftbooks.com User , 23 years ago
The Viking Critical Library's version of Graham Greene's "The Quiet American" is an indispensible text for full appreciation of Greene's perceptions of Indochina, France's war there, and America's budding involvement. The editor, John C. Pratt carefully selects criticism of Greene's TQA that creates a complete and rich discourse on Greene's life and writings that serves as a backdrop to his novel. Added to that backdrop are histories, such as Frank Futrell's thirteen-page explanation of how the United States became involved in Vietnam, and official documents from the State Department, to interviews with former South Vietnamese generals and Ho Chi Minh.TQA itself a wonderful book that,to an American, probes at our treasured notion high-minded idealism and our "can-do" spirit that has served us well at times and not so well at others. Greene's symbolism is telling and insightful, given that it was published well before the United States' full-blown involvement in that region of the world. While Greene relates many things that he experienced or felt in Indochina as a journalist, the book is not solely a "war novel". TQA, like many of Greene's books, takes the readers on the author's journey of personal morality and matters religious.

Published by Thriftbooks.com User , 23 years ago
Graham Greene spent four springs of his life as a journalist in Indochina and this fine, intelligent novel is an account of his experiences there. It's also a disturbing prophecy of the awful mess that was to be American involvement in Vietnam. It's also a study of friendship and betrayal, of youthful American idealism and mature British jadedness,of indifference and commitment. It is written in spare, elegant prose and the gaunt style has a journalistic immediacy that perfectly fits the subject and the characters without diminishing the emotional complexity.It is a major novel by one of the century's major writers and it hasn't dated; on the contrary,it has a disturbing contemporary feel.

The Quiet American Mentions in Our Blog