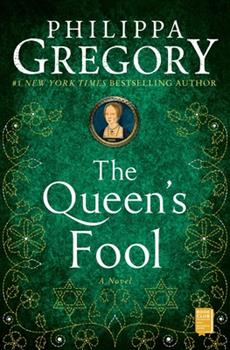 #1 New York Times bestselling author and "queen of royal fiction" (USA TODAY) Philippa Gregory weaves a spellbinding tale of a young woman with the ability to see the future in an era when destiny was anything but clear. Winter, 1553. Pursued by the Inquisition, Hannah Green, a fourteen-year-old Jewish girl, is forced to flee with her father from their home in Spain. But Hannah is no ordinary refugee; she has the gift of "Sight," the ability to foresee...

Published by Thriftbooks.com User , 17 years ago
This best selling English author of historical fiction has written yet another interesting work. This novel takes place during the reign of Mary Tudor, daughter of King Henry VIII and Katherine of Aragon. She would leave a legacy that would cause her to be known as "Bloody Mary" for her burning of heretics. The narrator is a girl named Hannah Green, a young teenager who has fled Spain and its Inquisition with her father, following the death of her mother. She had been burned alive at the stake as a heretic, when it was discovered that she was a "Marrano", a false Christian, that is, a Jew who has converted to Christianity but who follows the Jewish faith in secret. Landing in London, where her father opens a book store, Hannah makes the acquaintance of a handsome rake, Sir Robert Dudley, who discovers that Hannah has the gift of sight. She develops a personal relationship with him that eventually sees her enter into Queen Mary's service as her fool. Hannah serves Queen Mary, but at the same time, is sent by the Queen to serve her half-sister the Princess Elizabeth and spy upon her. Meanwhile, Sir Robert Dudley also uses Hannah in his treasonous plot to see the Princess Elizabeth on the throne of England. So, Hannah finds herself walking a dangerous tightrope and is fearful of discovery of her role in the political intrigues that are welling around her, as well as discovery of her own background, which would be grounds for death. Her worst fears are nearly realized when the Queen marries Prince Phillip of Spain. In the midst of all this political intriguing that appears to be going on all around her, Hannah has her own immediate future to think about, as she becomes betrothed to another Marrano such as herself. Infatuated with Lord Dudley, loyal to both Queen Mary and the clever and manipulative Princess Elizabeth, Hannah finds herself putting her own future happiness at risk amidst the political and religious turmoil of the time. This is a fast paced, breezy read about an independent, young woman who finds herself at a crossroad in her life and begins a voyage of self-discovery that will ultimately change her life. The story takes place in sixteenth century England, amidst all the political strife and religious upheaval of the time. The author weaves an intriguing tapestry of historical events and personages together with the intrigues that were rife in the Tudor court of the Queen who would become known as Bloody Mary.

A Royal Fool is No Fool At All

Published by Thriftbooks.com User , 18 years ago
THE QUEEN'S FOOL is a work of genius on several levels. First, the simple fact that author Philippa Gregory even had the idea for the concept of this fiction is staggering. Then, that she unfolds the complicated story with such grace and such ease seems miraculous. Finally, the depth and breadth of her research to provide the numerous historic details which make this plot come alive must have been massive. Anyone with some curiosity about the Tudor queens Mary and Elizabeth will find the story of "fool" Hannah Green to make for riveting reading. This was an era when one could be burned at the stake for heresy--and any religion other than the ruler's was heretical--for treason, and for witchcraft. Hannah, who is a secret Jew--with second sight--effectively is sold by her father to Lord Robert Dudley to service the royal court. She has to walk a careful line between the rival half-sisters, both daughters of Henry VIII and heiresses (in sequence of birth order) to the throne of England. How she manages to survive her servitude makes for quite a tale, and no one is better equipped than Ms. Gregory to spin this yarn. THE QUEEN'S FOOL is a work of genius on every level.

Published by Thriftbooks.com User , 18 years ago
The queen of England, Mary, who preceeded the more famous Queen Elizabeth on the throne has all but been forgotten. The central character to this book, Hannah Verde, is a Jewish girl pretending to be Christian for her own protection. Hannah has the unpredictable gift of being able to see the future. She is brought to court to work as a "fool" to the short lived King Edward and stays on, through thick and thin, to work for Queen Mary and her half sister Elizabeth. I found this story to be less about Hannah and more about Queen Mary who had a disastrous reign because of her fanatical Catholic faith and her poor selection of a husband. The story also focuses on the manipulative Queen Elizabeth before she was Queen. Although a bit dry at times I found this book to be a fascinating study of England at a time of extreme religious turmoil and intolerance. The message of the book, I think, is that more murder and mayhem has been committed in the name of religion than for any other reason and that the only way to peace is religious tolerance. I highly recommend this book.

Published by Thriftbooks.com User , 18 years ago
Philippa Gregory is one of the best historical novelists writing today, and she's at the top of her game with this book. As in the Meridon trilogy and "Wise Woman," she infuses her historical romance with a touch of mysticism. She takes the daring approach here of making Mary the sympathetic Tudor and Elizabeth the nasty one, and creates a most likeable heroine in Hannah Green, a Jewish clairvoyant in boy's garb who is a nice mixture of audacity and empathy. It sounds far-fetched, but Gregory pulls you in with believable (though not exactly period) dialogue, discreet sex, and fast-paced adventure. Hannah's emotions and reactions are always realistic, and neatly woven into the fantastically convoluted events of 1552-58. She lets "Bloody Mary" off a bit too easily regarding the burning of Protestant heretics (though of course, real life punished Mary badly enough), and makes Robert Dudley seem more of a matinee idol and less the calculating courtier that he was, but then this story is told from the point of view of an adolescent girl, so it's not really a flaw. There are many hints of a sequel in the novel, so I'm looking forward to her next revisionist take on the legendary Tudor women. I just hope we'll see more of Hannah Green, too.

Published by Thriftbooks.com User , 18 years ago
Philippa Gregory (authour of "The Other Boleyn Girl") returns to turbulent Tudor England in her latest novel, "The Queen's Fool." This time, our narrator-guide is a young Jewish girl, Hannah Green, who together with her father, has fled Spain and the Inquisition, for England. Here, they have taken great pains to live quietly and to show that they are fervent Lutherans, all the while practicing their faith in secret. That is until a chance encounter with the mysterious John Dee changes the course of their lives forever. Hannah and her father have opened a bookshop, where Hannah (unlike most girls of her age) has been working at dressed as a boy and acting as her father's apprentice. One day, however, young Robert Dudley and his tutor, John Dee, come to the shop; and in the course of things, discover that Hannah has the 'sight.' Suddenly Hannah's future changes dramatically: where marriage to a distant cousin seemed to have been her fate, she's now dragooned into the service of the Dudleys, who plan to use her 'sight' for their own means. And soon Hannah finds herself torn on all sides -- strangely drawn to her new master, Robert Dudley and yet missing her father dreadfully; and not wanting to be confined to playing the role of mere wife and mother, and yet not wanting to close the door on that option either. Hannah is confused and fearful about her future. But not even in her wildest dreams would she envision the part she would play in the fortunes of the Tudors...I made the mistake of picking up this book just before going to sleep. Such was the sheer brilliance of "The Queens' Fool" that I had to finish the book in one sitting. What a compelling and engrossing read this novel proved to be! And what a heroine Gergory has created in Hannah! The authour did a fantastic job in 'fleshing out' the many sides of Hannha's character, thus making her both complex and sympathetic. Philippa Gregory also did a simply magnificent job of bringing to life the England of the mid 16th century with all it's brutality and turbulence, as well as it's vibrancy and colour. With exquistely drawn character, easy and swift pacing, and a wonderfully lyrical prose style, "The Queen's Fool" proved to both a joy and a pleasure to read. And whether or not you're a fan of historical novels, "The Queen's Fool" is a must read.
Trustpilot
Copyright © 2022 Thriftbooks.com Terms of Use | Privacy Policy | Do Not Sell or Share My Personal Information | Accessibility Statement
ThriftBooks® and the ThriftBooks® logo are registered trademarks of Thrift Books Global, LLC