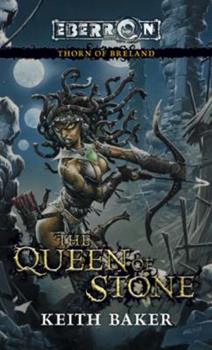 The Queen of Stone: Thorn of Breland

(Part of the Eberron Series and Thorn of Breland (#1) Series)

In the land of monsters, you'll want her by your side. Nyrielle Tam--better known by her code name, Thorn--is a Dark Lantern sent undercover to a summit in the monstrous kingdom of Droaam. The beasts of Droaam have organized and want recognition from the kingdoms of Khorvaire. Breland attends to gauge its neighbors' reaction to the new state's demands of equality . . . and to take the opportunity to recover something long ago stolen by the mysterious...

Published by Thriftbooks.com User , 11 years ago
Just finished reading the book, and it was one of the better books I've read in a while. The book very purposefully left some things open to questions, so I'm looking forward to reading the sequel. Regardless, every scene in the book means something, and the meanings slowly come into place as the end of the book nears. While Keith Baker's dreaming dark series was excellent as well for those who like Eberron, I feel that he's made improvements as an author since then - which is a good thing.

Published by Thriftbooks.com User , 12 years ago
The medusa on the cover made me pick it up, but the writing sucked me in. The first three chapters are extremely well-done, and kept me guessing for quite some time. If you love strong female characters, this is a book for you. The main character is a super spy named Nyrielle Tam. Code name: Thorn. Picture OO7, except she's a female half-elf who uses magic. Instead of all the technical gadgets that James Bond has, Thorn has magical items to help her on her secret impossible mission. The coolest item that she does have is her dagger, Steel. He's intelligent, meaning that he can speak to her telepathically, but only when she touches him. Steel and Thorn have a very, well, thorny relationship. Steel knows a ton of things, can detect magical spells, and acts like a kind of radar and annoying mentor all at the same time. All Thorn has to do is pass him over any language and he can read it for her. What a weapon for a spy to have. Her mission involves . . . Forget it. The mission is classified. One of the big strengths of this novel is that Keith Baker created the world, which several other authors are now writing in. He knows the material and uses it to add just enough complexity to make it interesting. By the way, Eberron is the world that won the Wizards of the Coast Contest a few years ago. It is a fascinating place and I've enjoyed learning about it immensely. If you're interested in a new take on fantasy, check out Queen of Stone. The writing is very strong and don't forget to pay attention to the little hints along the way. They are a big payoff at the end, which I did not see coming. Paul Genesse Author of The Dragon Hunters Book Two of the Iron Dragon Series [....]

Another amazing book from Mr. Baker.

Published by Thriftbooks.com User , 12 years ago
Keith Baker is one of today's best writers. This is my favorite yet of his books, I can't wait for the next one.

Published by Thriftbooks.com User , 13 years ago
The Queen of Stone by Keith Baker is the first book in a new Eberron series titled Thorn of Breland. It appears that this book in not so much part of a trilogy as it is an ongoing series. The second book is titled Son of Khyber and will be out in the Fall of 2009. This series is to be a series of stand-alone novels, but have continuing characters. Personally, I am happy some one is taking this approach and now-a-days it seems everything has to be a trilogy if it's a fantasy story. Hopefully this approach catches on with author authors. Time will tell of course. Here are my thoughts on this novel. If you like political plots based on nations and warring factions, then you definitely need to pick this book up. The plot of this book centers on the `people' of Droaam wanting to be recognized as their own nation. To this extend they invite representatives of the other nations to come and meet with them in the heart of the Droaam to express themselves and their case. There are numerous sub plots that surround the other nation's representatives. Some of them are present for more than just hearing Droaam's case to be recognized. To say more about those sub plots would invariably include spoilers so I will refrain from doing so. The main story is solid and provides great detail about the Droaam, such as stories about them, who is all involved, and some of the motivations they have for seeking to be a recognized nation. Of course, there is also a group within Droaam that does not want to be a recognized nation; they have their own reasons why. While at points the story seems rather linear and status quo, by the end of the novel the reader realizes that some of the things they thought were in fact not true and the actual reasoning's for some of the characters are interesting and well thought out. The characters in this book are all new characters and as such there is some character development that needs to take place right away. The main character, Thorn, was actually very hard for me to connect with. In fact, I simply did not really care for her character one way or the other. Which was odd, most main characters I either love or hate, but there is some connection there. With Thorn, I was rather apathetic. Part of this was because for every situation she seemed to have some item (magic or mundane) or some skill that would get her out of it. Maybe she was too powerful? The characters that I particularly enjoyed were the secondary characters. Such as; Drego, Ghyrryn, Tori, Harryn, Sheshka, and Sora Katra; for whatever reason these characters really drew me in and made me want to know more about them. Grated, that is the mark of a really good side character. It just felt odd as I was reading to want to know more about them and caring less about the main character. For the most part the characters all spoke with unique voices and it was evident they all had their own motivations. Dialogue was solid and flowed well and didn't see forced at all. To me, some of

Published by Thriftbooks.com User , 13 years ago
Just finished the book up last night around 2am, and it was one of the most fun reads I've had in a while. The depictions of the monster kingdom of Droaam and its inhabitants is utterly compelling. The plot is great, and I feel like I could easily read a dozen more books about this fascinating place, and its horrifying yet strangely sympathetic inhabitants. I feel like I should go out and march for civil rights for Medusa's in Eberron!
Copyright © 2020 Thriftbooks.com Terms of Use | Privacy Policy | Do Not Sell My Personal Information | Accessibility Statement
ThriftBooks® and the ThriftBooks® logo are registered trademarks of Thrift Books Global, LLC