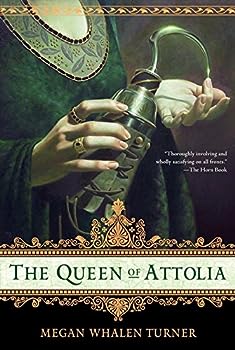 The Queen of Attolia (The Queen's Thief, Book 2)

(Book #2 in the The Queen's Thief Series)

This description may be from another edition of this product. Discover and rediscover the world of the Queen's Thief, from the acclaimed novel The Thief to the thrilling, twenty-years-in-the-making conclusion, The Return of the Thief . The epic novels set in the...

Published by EdenAnn , 3 months ago
Each book is better than the last !

Powerful, yet human, women. Broken but sneaky Eugenides. What more could you want?

Published by Sam F. , 2 years ago
I read this all in almost one sitting. I expected to be disappointed in this, because sequels are rarely as good as the first. But Turner doesn't seem to have that problem here. I loved getting into the lives of Attolia and Eddis, while never loosing my connection to and love of Eugenides.

Published by Thriftbooks.com User , 16 years ago
Though sequel to the best book in the world, The Thief, this book has a much different tone. War, rule, treachery, diplomacy, despair, and hope. Two kingdoms, Sounis and Attolia, stand on the sides of the mountain kingdom of Eddis. Across the sea lie the ambitious Medes, wanting to end up with those three kingdoms with as little effort as possible. Sounis no longer has a hold over Eddis (read 'The Thief') to entice the queen to marry him, and the king is anxious to control her kingdom by other means if necessary. Attolia is a tiger ready to pounce, waiting for her chance. All events are set in motion when Eddis sends her Thief, Eugenides, to spy on Attolia in her own capital. One time too many, and Attolia finally gets her hands on the thief who has eluded her grasp so many times before. She doesn't hang him, but sends him back to Eddis maimed for life. A one-handed thief isn't use to anyone; that is the way Eugenides feels. Locking himself in his room, he shuns the world around him and ignores the clues to the trouble his kingdom faces that would eventually pull him out of his stupor: Eddis is furious at what Attolia has done to her cousin, and as retaliation the two kingdoms go to war. Sounis seizes his chance and allies himself with Attolia, Attolia brings in the aid of the Mede and their crafty (and charming) ambassador, and Eddis's only hope lies in the Thief. Quote: "Steal peace, Eugenides. Steal me some time." Eugenides is growing from a boy to a man, but his wit still remains. The twists and turns and smooth curves will delight you, and you will cry and laugh with the clever Thief. The political intrigue will keep you on your toes, the characters will engross you: it will be hard to put the book down, and once you do you are anxious to pick it back up. A delightful story in whole, but even once you know the ending you will be able to read the book again (and again) for the beauty of each individual part.

EXCELLENT SEQUEL TO "THE THIEF"

Published by Thriftbooks.com User , 20 years ago
Don't read the editorial review of this book at the top of the page! It contains major spoilers.You definitely need to read "The Thief" before you dive into this book, or it won't make much sense.This book is darker and more mature than its predecessor. It's still categorized as a young adult novel, but if you had a hard time handling some of the situations or vocabulary in "The Thief", you might want to let this one sit on your shelf for a year or two.Ms. Turner does an excellent job of fleshing out the characters and the political situations she introduced in the first book. Although it has a satisfying conclusion, things are definitely left open for a third book, which I will certainly be waiting in line to buy.

A Wonderful Read for both Parents and Children

Published by Thriftbooks.com User , 21 years ago
I read this book (and its prequel, The Thief) to my children as bedtime stories. They are a highly critical audience, but found this book both exciting and intellectually interesting. It is exquisitely well-written. Ms. Turner never makes a false step with her characterizations, or with the plot, and her use of language is far above the quality of that usually found in children's literature. We found ourselves discussing the book during the day, thinking about the motives of one character or another, and picking apart the politics of the four kingdoms involved in her story. I highly recommend this as a book to read to children, as it provides a perfect vehicle for teaching them how to understand literature, not to mention a little psychology! My kids were crestfallen the day we finished the book, and we all hope Ms. Turner will write another!

The work of a great author - and a very cunning plot!

Published by Thriftbooks.com User , 21 years ago
"The Queen of Attolia" is a great book. It is true, however that this story is slightly darker/less pleasant than "The Thief," but it is still one of the better books that I have ever read. I find it difficult to write a review on "The Queen of Attolia" because it has so many little twits and such a clever plot that if I am not careful I'll give the story away! However, I strongly urge you to read "The Thief" (the first book in this two-book sequel) before you read this story or else "The Thief's" plot will be totally given away - and after all, the plot IS the story. And, if you liked "The Thief" you will not be let down by this book. "The Queen of Attolia" continues the drama of Eugenides - Gen - as he steals one thing after another, engages in a war, and makes his usual snide remarks and complaints, which somehow make you like him more than ever. Eugenides struggles with his emotions, fear, love, hate, pain; and he is faced with many decisions and dangers, and involves himself in risky plans and strategies during a war between the countries of Sounis, Eddis, the Mede, and Attolia that keep you gripping the book and wondering what will happen next. A spellbinding tale that has charm, adventure, action, a good plot, and (don't let this put you off!) a little bit of love. Do read this sequel, it's worth it.

Darker than its predecessor...

Published by Thriftbooks.com User , 21 years ago
"The Thief" was notable for the wry humor of its narrator, Gen, who revealed so much about himself while still keeping his story's twist ending in store for the reader. In "The Queen of Attolia," Gen (who prefers to be addressed by his full name, Eugenides, as befits his position as Queen's Thief of Eddis) finds his humor under severe strain as the uneasy political balance between the three countries of Sounis, Eddis, and Attolia finally explodes under the pressure of the encroaching Mede Empire. An ill-fated foray into Attolia's palace loses Eugenides his hand and Eddis' reprisal-war-seems to be the response the Mede Ambassador and his Emperor have been waiting for. Three small countries will either ally or fall, and at the moment none of them are at all concerned with alliance. "What can a one-handed man steal?" If he's very, very clever, he just might be able to steal peace.It has to be hard, being the sequel to a Newberry Award-winning book, but "The Queen of Attolia" manages admirably, in part by being different from its predecessor without losing the familiar context of characters and setting. A third-person narrative allows the reader to view the situation from the perspectives of various characters-mostly Eugenides and the Queen of Attolia-but also distances the characters; fortunately, Megan Whalen Turner maintains such detail in her descriptions that many third-person passages feel like first-person narratives. There are changes to deal with in familiar characters as well. The war tests everyone, Eugenides the most: formerly quick-tongued and irrepressible, he responds to his loss by withdrawing into himself, often bitter at what he sees as his failure and the gods that have abandoned him; you miss the adolescent Gen of "The Thief." The magus of Sounis betrays one alliance in hopes of salvaging another. Even the queen of Eddis, as beloved as she is unbeautiful, is not even sure whether or not her actions are as honorable as she first thought them. It's a sure sign that the author is doing a good job when you hurt in sympathy with the characters! But all is not lost: while there's much to endure before peaces comes to Eddis and Eugenides both, there is also a very good story. Turner keeps the tension high and never lets the political intrigue outweigh the interactions between the characters, and there's even a tale of the old gods which serves as a kind of mirror to the action in the latter part of the story. (Also a twist halfway through which changes everything you thought about Eugenides' motives; it works, too.) All in all, like "The Thief," "The Queen of Attolia" is one very good story of a convincing place that never was and people who, fictional or not, truly matter.
Copyright © 2020 Thriftbooks.com Terms of Use | Privacy Policy | Do Not Sell My Personal Information | Accessibility Statement
ThriftBooks® and the ThriftBooks® logo are registered trademarks of Thrift Books Global, LLC