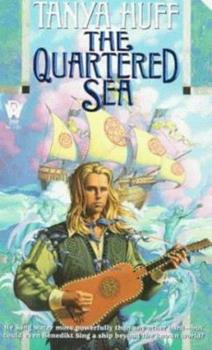 (Book #4 in the Quarters Series)

Queen Jalena of Shkoder has decided to start her reign by commissioning a ship to undertake the exploration of uncharted waters and see if it is possible to circumnavigate the world. When disaster... This description may be from another edition of this product.

Published by Thriftbooks.com User , 17 years ago
This is the first book I have ever read by Ms Huff and I willingly admit I was truly charmed. Her writing is good enough (despite some minor plot inconsistencies and typos: what are the editors at daw books paid for, I wonder?) and the story is interesting if not particularly original. In this book Ms Huff shows off with two main skills: the first is the ability of building up a breathtaking tension such as it will not allow you to put the book down until you have finished it; the second is her characterization: Benedict, the main character, is a frustrating, self indulgent, self pitying, annoying, bothering, immature brat you soon care for. He made me scream with vexation because of his weaknesses: Ms huff brings to life a man you simply want to give a good smack first and go to bed with after. The other characters are well rounded, finely depicted with special mention for the main villain, a woman I simply wanted to throttle painfully and slowly to death. Two flaws: the ending is too succint and brutal: after building so much tension in the heart of your reader you MUST allow him/her to untie these knots with a satisfying, extended ending. this does not happen and i found myself staring at the last page hungering for some release. Ms Huff, as nearly all of her she-fellow-writers is bold enough to write about same sex relationships and she does it with pleasant and commendable open mindedness. Still she seems to be convinced that a gay character (and Benedict IS gay, after all) can feel at least sexual attraction not just for one but for every woman. Surely enough these are fantasy worlds, so the author is entitled to write what she likes about sexual habits, but in my experience most gay men are unable to feel physically for a woman (let alone ANY woman) whereas they MAY feel attracted to her mind. True bisexuality is in my experience very seldom to be found. This notwithstanding the liaison between Benedict and Bannon (a lovely character) is moving and touching and Benedict's proneness for physical contact with kigh (the elementals bards command) is teasing. Because of the shocking brutality of many pages I strongly recommend no youngster be allowed to read this book

A Must Have for Shkoder Fans

Published by Thriftbooks.com User , 23 years ago
This book is excellent. I have not read any of her books, but I will now. The story had me crying all the way thru. Benedickt is soooo like an average person with our insecurities and doubts that he is very believable.

another success for ms. huff!

Published by Thriftbooks.com User , 23 years ago
I wasn't expecting this book to be released, so when I saw it on the shelf I was psyched! Having read the previous three books in the series I just hoped that TQS could live up to my expectations. I read this book in one sitting. Ms. Huff has outdone herself again!! The great thing about this book was that even if you hadn't read the others, TQS can easily stand on its own. TQS now has a permanent spot on my shelf and after reading it, it will have a place on yours.

Published by Thriftbooks.com User , 23 years ago
Young Benedikt is a bard, but he is a handicapped one. He can only Sing one Quarter, water, and that makes him an outcast, separated from the camaraderie of the other bards by his disability. So when his queen asks for a bard to travel on a dangerous voyage to search for the Dark Sailor of legend, Benedikt surprises himself and everyone else by volunteering. When disaster befalls the ship, Benedikt is the only survivor, and is taken captive by an odd race of people. As he recovers from his ordeal, Benedikt begins to learn the language of the strangers, and figures out that he is being played as pawn between two siblings who are embroiled in a political war for dominance. As the war escalates, and the brother and sister reveal that there are no lengths to which they will not go to win over the other one, Benedikt's very life is in danger. He realizes there is no hope for rescue, because no one knows he has survived. So Benedikt must do what he can to save himself. Utilizing the only power within his reach, the power to Sing water, the maimed and tortured young man does the only thing he can, he learns a new Song, the most powerful water Song of all, and manages to triumph over all odds. Tanya Huffs Quarters series is a fascinating creation of a brilliantly talented author. The Quartered Sea may be the best yet. A fantasy which stands alone as the coming of age of a young man who believes himself hopelessly handicapped, but who finally finds his place and triumphs against overwhelming odds, The Quartered Sea is also an excellent fulfillment of the promise of the other Quarters books. This book is an experience not to be missed, whether or not you've read the previous ones. Rickey R. Mallory
Trustpilot
Copyright © 2022 Thriftbooks.com Terms of Use | Privacy Policy | Do Not Sell My Personal Information | Accessibility Statement
ThriftBooks® and the ThriftBooks® logo are registered trademarks of Thrift Books Global, LLC