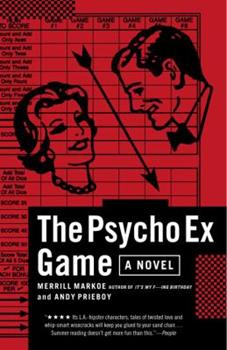 by Andy Prieboy and Merrill Markoe

Lisa Roberty is a successful screenwriter with an impoverished social life who's enduring a demoralizing job at the mind-numbing sitcom You Go, Girl . Grant Repka is an obscure indie rock musician who, in his forties, finds his career surprisingly resurrected with the success of his comic operetta about the doomed romance of Tommy Lee and Pamela Anderson. When Grant and Lisa meet after one of his shows, sparks don't immediately fly--but e-mail addresses...

Published by Thriftbooks.com User , 16 years ago
I don't know what to say about this book except that I loved it to death, and I hate almost everything. It's as though an angry Jane Austen and a sardonic Flann O'Brien met and decided to write a book together. It's smart. It's funny. It's true. As for the person who whined about how unrealistic it is that Grant and Lisa started every e-mail with "Dear Grant" and "Dear Lisa"--kiddo, back in the day when manners and literacy still had some shred of a hold on American society, that was how intelligent people began communications with each other. Now that we live in a world where our nation apparently has an official "Skank Laureate" (a position now held by Paris Hilton, though there are any numbers of contenders for the crown), you may be somewhat unfamiliar with the concept. Fortunately, the writers of this book have manners, literacy, and intelligence in spades. Big gushy virtual fangirl kisses to both of them.

Get out your decoder ring...

Published by Thriftbooks.com User , 16 years ago
As a long-time Andy Prieboy fan, I had fun translating the book from it's fictional names to the real ones! I was one of those dedicated fans at "The Empire Club" while the whole musical was being developed/fine tuned. I was also a regular at The Uncab where Merrill Markoe had performed. It was great to hear all of the old stories again that Andy would recall during his gigs. After moving away from LA, it's been years since I've had the honor of seeing his brilliant shows. Being out of the loop, it was also a bit of an update about the status of the musical. I am excited to hear that more books are to come and that the musical may finally get off its feet. Thank God he didn't "sell out" to do the musical "their way". *That* would have been too WTWL! Good luck Andy - I hope you become a hit AND rich to spite them all!

Published by Thriftbooks.com User , 17 years ago
I bought the book at the urging of a friend and didn't really expect to get in to it as much as I did. but it really hit home. THe combination of funny and painfully honest was great. I seriously couldn't put it down until I finished it. I especially recommend it to anyone who has had love go spectacularly wrong for them.

Feel instantly better about all your Exes. Buy this book.

Published by Thriftbooks.com User , 17 years ago
With its biting wit and unflinchingly honesty, the Psycho Ex Game is harder to walk away from than a co-dependent relationship. I couldn't put it down. This book is a must-read for anyone who's been stuck in a bad relationship and wondered how they got there.

Yikes. Its my Life.

Published by Thriftbooks.com User , 17 years ago
I never related to characters more strongly than I did to those in Psycho Ex GAme. I am embarrassed to admit this is the story of my life.Once I started reading I couldnt stop.THen I bought copies for all my friends.
Copyright © 2020 Thriftbooks.com Terms of Use | Privacy Policy | Do Not Sell My Personal Information | Accessibility Statement
ThriftBooks® and the ThriftBooks® logo are registered trademarks of Thrift Books Global, LLC