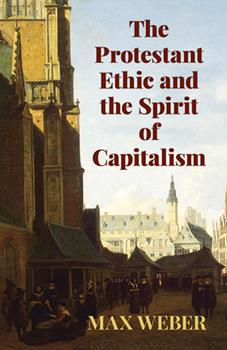 The Protestant Ethic and the Spirit of Capitalism

The Protestant ethic -- a moral code stressing hard work, rigorous self-discipline, and the organization of one's life in the service of God -- was made famous by sociologist and political economist Max Weber. In this brilliant study (his best-known and most controversial), he opposes the Marxist concept of dialectical materialism and its view that change takes place through the struggle of opposites. Instead, he relates the rise of a capitalist economy...

Hard to judge this edition

Published by Thriftbooks.com User , 12 years ago
My problem with this edition is that it was overly detailed with more pages dedicated to notes and introductions than the main text. I read the introductions to gain that deeper understanding of the work, but what I found after reading Weber's text is that all the introduction did was reiterate Weber's points. Mr. Kalberg suggested that Weber's work is a difficult read which is why I spent the time reading his introduction, but when I got to Weber's actual work I didn't find it all that difficult. I'm not suggesting Weber is light reading by any means, but I found it to be no more difficult than I had already anticipated. The other problem I had was with the notes. Some notes I found to be helpful, but very early on the amount of notes became cumbersome. I also found the majority of the notes to be unhelpful because they seemed to make obscure points that detracted from the reading rather than enhancing it. I finally had to ignore all the notes because it was extremely tedious to read page after page of notes that I felt didn't really contribute to my overall understanding or experience. The problem I have in reviewing and rating this book is that I don't think it was really written for me or readers like myself. I think this book was written for those readers who really want to understand this work inside and out. Basically it was written for that reader who wants to know every little obscure detail. The reader who is looking for the book with a hundred pages of notes and a long introduction by an expert such as Kalberg, and because of this I have a hard time judging this book. It wasn't written for me, so I have a hard time judging this book negatively. This is why I decided to give it four stars but add the problems I had with this edition in the review. What I would tell any potential reader is know what it is you want from this book. If you are looking for a lot of depth then this will suit your needs well, but if you are looking to simply read Weber with a few clarification notes where necessary then this might not be the version of this book you are looking for. I hope potential readers will find this review helpful.

A C lassic for All Times

Published by Thriftbooks.com User , 17 years ago
Weber's "Protestant Ethic" was originally published in 1904-1905 and later in a second, revised edition (1920). This edition is the second edition, and the translator is Talcott Parsons. In "The Protestant Ethic" Weber famously attempts to explain how the spirit of modern rational capitalism emerged; and he essentially argues that an important part in this process was played by what he termed ascetic protestantism or different types of Protestantism that were activistic and ascetic (most famously Calvinism). Ascetic Protestantism energized businessmen and workers, and valorized a new type of capitalism: rational capitalism which is much more methodical and dynamic in nature than the type of capitalism that existed in Europe in the 1500s ("traditional capitalism"). Today rational capitalism has conquered society and turned it into an iron cage (to use Parsons' famous translation of two words in German that are more accurately - and less imaginatively - translated as "steelhard casing"). "The Protestant Ethic" is by far the most famous sociological study and is unsurpassed in theoretical boldness and creativity. Parsons said that he found it as exciting to read as a detective novel. Most of us have to struggle quite a bit with it - but it is definitely worth it!

Published by Thriftbooks.com User , 19 years ago
This book is the founder of the prolific field of eocnomic sociology. It introduces the concept that culture (in the form of the protestant ethic) is better adapted to fit capitalism. Therefore, capitalist growth was found more frequently in protestant societies than in others. Since Webber, there has been much study of this topic, with some of the main names being Lawrence Harrison (focusing on the culture of underdevelopment) and Francis Fukuyama (focusing on how trusting societies benefit economically). Both and others push the frontiers initially established by Webber.Though controversial especially today in the period of political correctness, Webber presents a strong mainly anecdotal case (given the absense of many statistical tools at the time) of why protestant societies succeed in capitalism; his main argument (though there are many other important ones) is that it is socially acceptable in protestant societies to make a profit, whereas it may be considered immoral in other societies, such as catholic ones. This is a good theoretical book with a few good anecdotes. It is for someone interested in the history of sociology, especially as it pertains to economics. If you are just looking for a link between culture or religion and economics, look at Larry Harrison.

The protestant ethic and the spirit of capitalism

Published by Thriftbooks.com User , 22 years ago
This is a very concise and succinct exploration of the role of four major branches of religious thought to come out of the Reformation: Lutheranism, Methodism, Anabaptist and Calvinism. His exploration of ascetism within these specific religious philosophies and their impact on capitalism is as insightful as I have ever read. Having personal and extensive experience amongst some of the reminant religious communities still functioning in North America, I must say his objectivity in a such a subjective subject makes for a lucid and enlightening read. If you do not have some background in Reformation and northern European history of this time, you may miss much of what he's trying to convey. He demonstrates that he is a true scholiast of this subject. Have your dictionary handy!!!

3 Stars For This Is Pure Ignorance.

Published by Thriftbooks.com User , 22 years ago
Weber's Protestant Ethic and the Spirit of Capitalism is CLASSIC - and should be a mandatory read for every student of sociology. Unfortunately, the classic literature of sociology isn't emphasized enough in today's educational institutions. Students are entering the real world without the foundation of social prophets and coming up with their own ideas of "what the world is coming to," and taking credit for ideology that has long been debated and written down by masterminds such as Weber. Pay attention! What is this book really about? This is a revolutionary work discussing critically the causes and effects of sociological chance, and how the sociology of religion has changed meaning because of the philosophy we now base our ideas on. Anyone interested in postmodern theory, the iron cage of bureaucracy, rationalization, and even symbolic interactionism should read this before continuing to literature of modern sociological thought.
Trustpilot
Copyright © 2022 Thriftbooks.com Terms of Use | Privacy Policy | Do Not Sell My Personal Information | Cookie Preferences | Accessibility Statement
ThriftBooks® and the ThriftBooks® logo are registered trademarks of Thrift Books Global, LLC