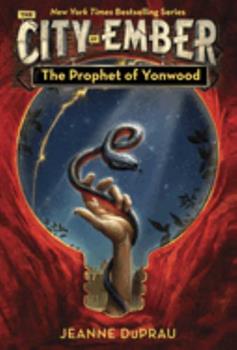 (Book #3 in the Book of Ember Series)

Before there was Ember...there was Yonwood. Discover the prophecy that started it all in this prequel to the The City of Ember--a modern-day classic with over 4 MILLION copies sold Nickie will grow up to be one of the first citizens of the city of Ember. But for now, she is a girl who has just moved to the town of Yonwood. There, she discovers a place full of suspicion, where one citizen's visions of fire and destruction have turned everyone against...

Published by Thriftbooks.com User , 16 years ago
The Prophet of Yonwood is about a girl named Nickie who moves to the city of Yonwood because she has inherited a house there and her aunt wants to sell it. In the city of Yonwood, someone named Althea Towers has a vision of the end of the world and everyone in the city believes it and she becomes the Prophet of Yonwood. Everyone except for strange old Hoyt McCoy, who doesn't agree with the Prophet's rules, such as: No lights, no singing, no dogs, etc... On her adventures, Nickie meets a boy named Grover, who keeps snakes in his backyard. Together, they have lots of adventures. I loved this book, and if you read it, you will too!

Published by Thriftbooks.com User , 16 years ago
In all fairness, I will agree with other reviewers that this book WASN'T as "good" as the other two in the series. Well, there is definately a lot less going on in the story, anyway. But this is a PREQUEL to the City of Ember which means it doesn't necessarily have to involve the same characters. It all ties together in the end, and comes back to the original story. Just hang in there and don't dislike the book because it doesn't continue the story after the People of Sparks. A good addition to the series!

Published by Thriftbooks.com User , 16 years ago
Prophet of yonwood was great. I loved all the exciting thing that were in it. I would love to read it over and over again. It was just how I expected it to be. I hope there is a 4th book.

Published by Thriftbooks.com User , 16 years ago
Overall, I thought this book was a pretty good book although I sitll think that City of Ember is the best book in the series. This book explains how the city of Ember came about and it was very intresting starting about at the middle of the book. I would recommend this book to all people and once you have read thsi book you should continue on to reaing the rest of the series as it is so good. Here is a summary of this story: At first, it explains a person who has a vision, a vision so called given by a god. This city's name was Yonwood. It would become a town that listened to whatever the prophet that had the vision said. then, the story moves over to a different setting, to a girl name Nickie. In Yonwood, there is a house that her great grandparent used to live in and her mom is trying to get the house sold. Nickie wants to move seeing that her town she is living in is wicked and goes to see the house along with her moms sister who is also trying to sell the house. As Nickie later finds out the house is a awesome house, the most marvolous house that she has seen. She wants to live in it and sets 3 goals: To live in Greenhaven(the house, To have a love, And to do something for the world. Life moves along from here with many happenings that change Nickie's life. Later on, she goes to the Prophet to see who she really is even though she isnt suppose to. She goes and when she does, she awakens the prophet from her dream which has caused so much troubles in Yonwood. the story of yonwood city slowly continues form here. Then she learns from her mom that her dad has finished the project he was working on in California and she finds out that the project is an underground city. the City of Ember...

Terrific and surprising prequel to Ember

Published by Thriftbooks.com User , 16 years ago
I liked this book very much. As in The City of Ember and The People of Sparks, I found the suspense really agonizing because there is so much at stake. Knowing what has happened long before Ember and Sparks begin makes every reference to The Crisis horrifying. All the loving descriptions of the natural world feel like elegies. That humanity gets a reprieve of 50 years or so does matter because we are happy for the lives these people get to live. But we believe in that catastrophe the more because it seems so likely and so horribly familiar. Postponed for now but coming, surely. Otis is wonderful! The roundup of the dogs is just unbearable, as are Nickie's efforts to find Otis. I loved her little shrine in the woods to her lost Otis and to any human who comes along and would like a snack. When the dogs come back, I cried. I think Mrs. Beeson is an excellent creation--not a bad person, but a person whose good qualities get co-opted by the her judgmental nature and her need for certainties in a time of terrible suspense. It's easy to like her when Nickie does and then begin to feel uneasy. Right at the beginning, with the interpretation of "sinnies," Duprau sows a seed of doubt and get me wanting Nickie to meet the Prophet face to face. Crystal is good, too--not a flat character as she might have been, but a regular person who has her very fine moments and then some bad ones, when she lets frustration overtake her. (I can't really forgive her for not being willing to go look for Otis again the following day. Of course, she doesn't know Otis then . . . .) I like it that the world leaders are distracted from their drive to annihilate their enemies by the wonders of the universe; it's as if Grover and his snakes and Nickie and her dust mite and the Siamese twins win this round. Life wins because the world is so astonishing that even greedy frightened men can find cause for hope in it (even if they are hoping just for power for themselves). I think it gives space for the reader's imagination to make this young heroine the 60-year-old woman who writes the journal we read in Ember. I think, indeed, that it is a haunting inspiration to tell the story of that woman's childhood and show how she battles the same destructive urges within herself that Lina and Doon and everyone else struggle with in the other books. No dogs in Ember, though. That must have been an extra sadness for Nickie. I like Greenhaven and the town of Yonwood and the albino bear and what Grover calls to him. Why not assume communication is possible? Unless we are foolishly certain about our guesses of the other's nature, it can only help to address the unknown with respect and friendliness. Duprau's books inspire me to open my heart and gather my courage, and I don't see why younger readers shouldn't also find this encouragement in these wonderful stories.
Trustpilot
Copyright © 2022 Thriftbooks.com Terms of Use | Privacy Policy | Do Not Sell or Share My Personal Information | Accessibility Statement
ThriftBooks® and the ThriftBooks® logo are registered trademarks of Thrift Books Global, LLC