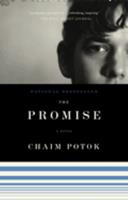 In a passionate, energetic narrative, The Promise brilliantly dramatizes what it is to master and use knowledge to make one's own way in the world. Reuven Malter lives in Brooklyn, he's in love, and he's studying to be a rabbi. He also keeps challenging the strict interpretations of his teachers, and if he keeps it up, his dream of becoming a rabbi may die. One day, worried about a disturbed, unhappy boy named Michael, Reuven takes him sailing and...

A rich offering from a master storyteller

Published by Thriftbooks.com User , 18 years ago
A sequel of sorts to "The Chosen", although this book stands quite well on its own, "The Promise" is the story of Reuven, a young rabbinical student, who befriends Michael, a troubled young man who eventually has to be institutionalized under the care of Reuven's friend, Danny. Meanwhile, Reuven is struggling with his teacher, Rav Kalman, a hard-line traditionalist who clashes with Reuven because Reuven has come under the influence of modern critical scholarship due to the influence of Reuven's own father and of Michael's father, Abraham Gordon. The clash of differing schools of Jewish religious thought and the conflict between religious and non-religious Jews is a major theme of this book. Meanwhile, Michael is making no progress in his therapy which leads Danny to propose a radical method of treatment. This book is absolutely riveting, and it's very hard to put down once begun. The late Chaim Potok, in my opinion, is one of the best novelists of the late 20th century. His evocation of modern Jewish life and issues is unsurpassed, and he tells his stories so effortlessly that even a non-Jew like myself cannot help but be captivated at the same time as I'm being educated. In my opinion, this book is better than "The Chosen" and nearly equal to my favorite Potok novel, "My Name is Asher Lev". I give "The Promise" my highest recommendation.

Published by Thriftbooks.com User , 20 years ago
It's nice when you can finish a book you like, and find that the major characters reappear in a later book. You really have to read The Chosen first, to meet the teenage Danny and Reuven. The Promise gives us a second chapter of their lives, when they are on the brink of beginning their chosen careers, Danny as a psychologist, Reuven trying to become an ordained rabbi.There are two storylines going on simultaneously. Most of our time is spent on the conflicts between Hasidic doctrine and modern thought. The conservatives (Hasids) are like fundamentalist Christians in the sense that they believe every word of their holy books, literally. The moderns (including Reuven Malter and his father) apply their intelligence, and evaluate what they read. Perhaps the biggest conflict is when the Malters point out errors in the holy books, and arouse the fury of the Hasids. Will Reuven still be allowed to become a rabbi, even though he is a bit of a dissident?The other storyline centers around Danny, the psychologist, taking on his first challenge. Michael is a mentally sick little boy, and it is up to Danny to crack the case, find out why he is sick, and find a way to cure him. In today's world we would be thinking in terms of lithium and various drugs to try to straighten Michael out, but this isn't that kind of book. The answer here has nothing to do with medicine or drugs. In Potok's world, Danny must find what is troubling Michael.One weakness of the book is that the psychology seems extremely oversimplified, and not believable. We have to keep in mind that this isn't a psychology book. It's a story. And it really is a pretty good story. Even when I praise a book, I like to present the negatives, for the sake of fairness.Potok gives us an interesting new character named Rav Kalman. In a sense he is the "bad guy" because he is the conservative who is making life difficult for the Malter family. But he is also described as a man who escaped from a German concentration camp twice, joined the partisans, and killed many Germans. This is a man of action, not just a teacher and rabbi.

A great book by a great writer, thought-provoking

Published by Thriftbooks.com User , 21 years ago
I was a student at the University of Pittsburgh in its writing program when I took a hard cover copy of The Promise to a program where Chaim Potok was speaking about Davida's Harp, and I know I must have thrown him back when I asked him to sign it. He is a slight, gentle, soft-soken man, and he had noticed me taking notes as he spoke. "Is this your favorite of my books?" he asked me. I nodded my head, and he did sign The Chosen. Truly, the book had troubled me, because it's a troubling world and Mr. Potok's book lifted the veil of false expectancies for me, a young Jewish woman who expected the community of Judiasm to be without vices and a safe place. In truth it is full of people who are very much like others everywhere, the same motives, insecurities and yes, sometimes even unsavory characters. I have grown up to become an author myself, and my greatest hope is that one day, someone like the girl I was will become troubled by one of my books. Read it for it's insight. It's about people. All people.

Dynamic sequel to The Chosen

Published by Thriftbooks.com User , 22 years ago
The Promise continues with the two main characters of The Chosen: Danny Saunders and Reuven Malter, both in the throws of graduate school/seminary in this book. The tension between traditional ( read fundamental) beliefs... represented by Hasidism... and less orthodox Jewish practices and beliefs is not only hammered out intellectually but is embodied in characters in the book: teachers on the staff of the various yeshiva , Reuven's father who is a textual/critical scholar of the Talmud, and Gordon, a liberal scholar and writer, finally, the vitriolic East European Talmud teacher, partisan, and survivor of the death camps. The value of the book reaches far beyond a sympathetic depiction of Jewery (thouge it paints a vivid picture of the very fabric of Jewish emotional and religious life ); it casts a bright light on the entire controversy revolving around textual criticism in religious study and and the sometimes bitter exchanges between fundamental scholars trying...{in this book} to rebuild the remnants of European Jewery and their devastated world following the holocaust) and the community of textual critics who are moving deeper and deeper into the sacred texts with their "destructive" academic tools. A must read for anyone interested in scholarship, belief, faith, psychology and the tensions that connect all thinking humans, no matter what faith. Interesting sub-plot relates to Danny Saunder's treatment of an emotionally wounded boy and his rebuilding of his psyche with the techniques and tools he "learned" from his father, a Hadid tzaddik. Simply a wonderful book...worth crying over. The chain smoking, crooked fingered Rav who teaches Talmud and is juxopposed to Rev Gershon (also a Talumd teacher) is worth the read alone. All the characters are drawn with great sympathy.
Copyright © 2020 Thriftbooks.com Terms of Use | Privacy Policy | Do Not Sell My Personal Information | Accessibility Statement
ThriftBooks® and the ThriftBooks® logo are registered trademarks of Thrift Books Global, LLC