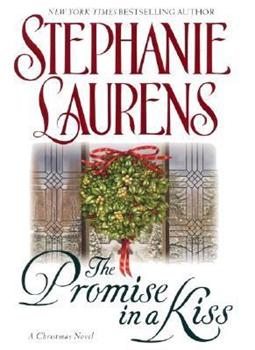 The Promise in a Kiss: A Cynster Christmas Novel

(Part of the Cynster Series and Cynster Holiday Special (#1) Series)

Helena is walking through her convent school one snowy, moonlit Christmas Eve when a man literally falls at her feet. She doesn't know it, but its Sebastian, the influential Duke of St. Ives.

Published by Thriftbooks.com User , 19 years ago
Everything is all in all wonderful, but my question that has made me nervous about buying the book was the explanation I expected about Scandal. What was the Duke's excuse to his wife? How can an awesome love story be written when a few years down the road he cheats on her. Regardless of feeling sorry for Scandal's mother, he broke faith with his love. I was kinda hoping to find out how he justified his actions. Learn what he was thinking when he made his decision and how he felt about it later. Did he feel like he betrayed her? Did he want to confess? Was it no big deal? I wish Stephanie Laurens answered that. Of all her books on the Cynsters that was one thing that stuck in my mind. How could he? I thought he loved her! Well that is all I had to say.

Published by Thriftbooks.com User , 20 years ago
4 7/8 because I wasn't absolutely thrilled about one small part at the end, and it could be that I didn't want to like the book as much as I do. This is a prequel, so if you have read any of the Cynster books you have a large amount of information about the characters, and Sebastian has a big fault (to me). The plot is solid, the characters stay consistent in their behavior without being melodramatic, and the physical romance is wonderful. One of my favorite parts of the book is how Sebastian's maintains his bearings while falling in love. At times he treats Helena in a proprietary manner but then responds to her in a way that is almost deferential, without the book seeming "jumpy". I love how Ms Lauren's does that. Helena is not one of the "I'll never marry..deep sigh" heroines that can often get on one's nerves. She knows the requirements of her station and behaves accordingly while reaching for her own goals, all without becoming a martyr-you know the type. Secondary characters are supportive but expect no sequel out of them. The book is cleaver, witty, well written and ended too fast. And for the record, most of my friends have no problem with Sebastian, and see no faults.

Published by Thriftbooks.com User , 20 years ago
This book was well worth the wait! The first page grabs hold of you and the book doesn't let go until the last! Although a prequel to the Bar Cynster series, this book stands beautifully alone. The two main characters, Helena and Sabastien, are fleshed out very well from hints and descriptions in previous Cynster books, yet it also hold many surprises. Helena meets her future husband on the Convent grounds, in her night wear, while returning from nursing her ill sister. Sabastien literally falls at her feet. As a reward for misleading his pursurers, he kisses her, inadvertantly leaving them both with a promise for the future. Years later they meet again. The rest as they say...is fate. Especially satisfying here was that the hero doesn't try to escape his fate. He accepts it gracefully. In keeping with his character grace and charm. The herione on the other hand...is sweetly naive, and hilariously direct. The byplay between the two is wonderful! After a twisted, unusual courtship they travel to outwit a common enemy, have an unwelcome duel, and end with the delivery of an heirlom and a letter. One of the things that Ms. Laurens does best is to tie up all the loose ends. This story is no different. The epilougue here bridges the gap between the years to the next installment of the family and will leave you with a satisfied smile. I throughly enjoyed this story, and will look eagerly forward to the next in the series. Thank you, Ms. Laurens, for a great read! Please send the next one soon!!

Published by Thriftbooks.com User , 20 years ago
In 1776 Paris, Helena de Stansion plans to flee to England to avoid an arranged marriage by her guardian, Comte Fabian de Vichisse. However, duty calls and she tends to her ailing sister. In the garden, she spots an intruder, who unbeknownst to her steals a dagger from her guardian. Surprisingly she helps him escape, but not before he kisses her. Fabian uses Helena as a pawn to gain his desires. He agrees to allow her to go to England to marry a duke as long as the noble is wealthier than she is, which limits the field to almost no one. At a London soiree, Helena recognizes Sebastian Cynster whose kiss from that day in the garden still excites her. Sebastian also knows that Helena is the woman he never forgot. Helena tells Sebastian that she seeks a husband and asks him to help her find a spouse. Sebastian knows he loves Helena, but he is not sure how to propose to his beloved. Then there is her guardian holding her sister hostage to insure Helena remains pliable. Stephanie Laurens has written six Cynster tales including a NY Times bestseller. Her latest tale, THE PROMISE IN A KISS, is a prequel to the other novels and may be the best of the lot. Besides containing an exciting story line that shows the "roots" of the Cynster dynasty, the plot has a delightful hero and an intrepid heroine who make this into a fabulous late eighteenth century romance.Harriet Klausner

Laurens at her best!

Published by Thriftbooks.com User , 20 years ago
Stephanie Laurens has based her Bar Cynster novels on the premise that even a man who doesn't particularly want to get married will be happily resigned to his fate once he meets his soul mate (even if she isn't resigned at all!).That premise has served her better in some of the Cynster series than others. It's a comforting premise, that we all have a soul mate out there, but adhering to that plot occasionally causes Laurens to churn out somewhat identical stories. The best of the Cynster series retain enough of this "soul mate" premise to be comforting, but also manage to be original and fresh.Thankfully, "The Promise in a Kiss" now joins "A Secret Love" and "Devil's Bride" on my list of "Best of Cynster."Sebastian is pure Cynster, and as Cynster fans all know, even the most boring of Cynster men are pretty ideal. Helena is a wonderful match for him, strong-willed and feisty. In addition, we are given good justification, both for Helena's strong-willed nature and for her resistance to Sebastian's protectiveness. The misunderstandings between them have good basis, and the resolution of those misunderstandings is reasonable and understandable.My only (small) quibble is that, because the "villain" is off-screen (so to say) most of the book, his villainous nature doesn't exactly loom over the book.This is a welcome addition to the Cynster series -- Laurens at her best. Enjoy!
Copyright © 2020 Thriftbooks.com Terms of Use | Privacy Policy | Do Not Sell My Personal Information | Accessibility Statement
ThriftBooks® and the ThriftBooks® logo are registered trademarks of Thrift Books Global, LLC