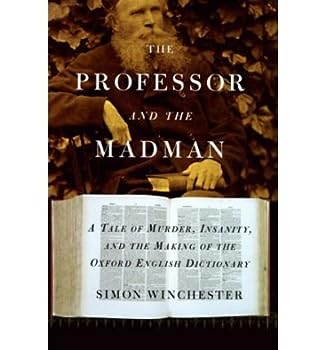 The Professor and the Madman

A New York Times Notable Book The Professor and the Madman is an extraordinary tale of madness, genius, and the incredible obsessions of two remarkable men that led to the making of the Oxford English... This description may be from another edition of this product.

Funny, forgot it was non-fiction

Published by Julie , 2 years ago
I liked how the author told the story, didn't really dislike anything about this book. The characters were great, almost forgot that they were real people. I think everyone should read this book, don't really know any other books or authors similar to this author. It made me want to start my own dictionary.

A criminally insane man and the Oxford English Dictionary

Published by Thriftbooks.com User , 16 years ago
The Oxford English Dictionary is one of the largest and most encompassing dictionaries in the world. It took almost 70 years to complete and during those years thousands of volunteers scrutinized newspapers, journals and new and old books for new words, new meanings of words and sentences that would clarify the meanings. One of the most active volunteers was the American doctor William Chester Minor. During the 20 years that the doctor collaborated he developed a friendship with the editor, James Murray. When Murray decided to visit doctor Minor, he found that the latter served a lifetime sentence in the Broadmoor Asylum for the Criminally Insane after he had killed an innocent worker. The intellectual doctor Minor was found to be mad as a hatter: at night he heard voices, he claimed he was kidnapped, tortured and abused and under the floor of his cell there would live a bunch of Pygmies. The biographies of Murray, Minor and the Oxford English Dictionary are nicely interrelated in this well-written book.

A Dictionary will never be the same again ????..

Published by Thriftbooks.com User , 18 years ago
This is a well-told tale that leads the audience through some of the politics involved in the production of the Oxford English Dictionary. The author has fictionalised the account at times through necessity, but made it clear that this is what he has done, in a story that combines murder most foul with the troubled life of the murdered.The dictionary ("OED") was a product of the Victorian `we can do anything' optimism, and was undoubtedly a hugely ambitious project. The task would probably have been finished without the help of Dr William Chester Minor, a resident of a large country house in Berkshire (and better known as Broadmoor Asylum for the Criminally Insane). However, the work was enormously advanced by the surgeon / murderer. Minor grasped the vast amount of work involved, and had the tiem and source material to contribute freely. He also had a wonderful method in his searching out quotations for the normal and abnormal use of words. His method enabled the editorial team, led by Dr James Murray, to request help from Minor and know thay would receive an enlightening and quality answer.Minor died in 1920, back in his native America, more that 7 years before the completion of the OED. In the completed work there are 414835 words defined, and 1,827,306 illustrative quotations. Minor alone had contributed scores of thousands.The English speaking world is indebted to the contributions of William Minor. We are also grateful to Simon Winchester for telling the tale with clarity and humour. Winchester also debunks the mythical account of the first meeting between Dr Murray and Minor. I got the feeling that the author liked the fabled account, even though he knew it not to be true (and clearly states that fact). Peter Morgan, Bath, UK (morganp@supanet.com)

Published by Thriftbooks.com User , 18 years ago
Winchester has a marvellous knack of being able to bring to life rollicking stories from the past, which in other hands may appear dry and boring. The plot cracks along, making this a fast (and informative) read. If you like this, I also recommend "The Map That Changed the World", also by Simon Winchester. This book is known in the US as " The Professor and the Madman"

Published by Thriftbooks.com User , 22 years ago
Okay, you can get the long-winded plot summaries from the other reviews here, but you won't get this: The Professor and the Madman is a book for practically anybody. I have a personal interest in the history of the English language, so I found the book especially fascinating, but the truth is, it has something for everybody. It's not just a tale of some convicted murderer who contributed a lot of quotes to the Oxford English Dictionary. It's a romantic and tragic story, about two misunderstood men--one trapped in an asylum with a wish to contribute something to the world, the other a highly respected, yet humble and intelligent scholar. The connection between them--as well as their individual stories--is mysterious and beautiful. If you enjoy true stories of profound and personal undertakings, or if you just like a good book about unusual and interesting subjects, then buy this. It is not padded or drawn out, as some less patient reviewers would have you believe; it is entertaining, informative, and well worth your while.

Splendid re-telling of a true story of triumph amid tragedy.

Published by Thriftbooks.com User , 24 years ago
I purchased this book while in London recently under its British title THE SURGEON OF CROWTHORNE. Apparently for American readers, the publishers felt it necessary to "tart up" the title to THE PROFESSOR AND THE MADMAN. Regardless, Simon Winchester's story between the covers is splendidly told, without sensationalising even the most horrific details, revealed matter of factly well into the book. The story is that of Dr. Minor - an American Civil War surgeon - who went mad amid the horrors of "The Wilderness." Pursued by his nightly demons, he later wound up in grim South London where he shot dead a totally innocent man. Sent to Broadmoor - a sprawling lunatic asylum near London - he became one of the most valuable contributors to the compilation of the magisterial Oxford English Dictionary. Winchester recounts - correcting but not spoiling a wonderful story - the meeting between the OED's legendary James Murray and his reclusive contributor. While ultimately Dr Minor's story is a tragic one - not the least for his hapless victim - it is also a tribute to the persistence of the human mind. Cleverly presented with appropriate OED citings, this book is not to be missed for anyone interested in words. If you'll excuse the expression, this is the "definitive" work.
Trustpilot
Copyright © 2022 Thriftbooks.com Terms of Use | Privacy Policy | Do Not Sell My Personal Information | Cookie Preferences | Accessibility Statement
ThriftBooks® and the ThriftBooks® logo are registered trademarks of Thrift Books Global, LLC