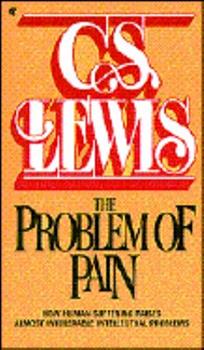 The Problem of Pain

Why must humanity suffer? In this elegant and thoughtful work, C. S. Lewis questions the pain and suffering that occur everyday and how they contrast with the notion of a God that is both omnipotent and good'the answer to this critical theological problem is within these pages.

Received a version with a different cover than ordered

Published by Hali , 1 year ago
This review is not addressing the content of the book, but rather the fact that the cover of the book I received is not the recent one shown in the purchase, but an old version. I’m disappointed.

I know this book is incredible and was so excited to find it for such a great deal, but

Published by Raquel , 2 years ago
I bought this thinking it was the classic collection cover (so that it will fit with my other C.S. Lewis books but it wasn’t. Item was displayed incorrectly which is upsetting.

Published by Thriftbooks.com User , 17 years ago
C.S. Lewis was a rare individual. One of the few non-clerics to be recognised as a theologian by the Anglican church, he put forth the case for Christianity in general in ways that many Christians beyond the Anglican world can accept, and a clear description for non-Christians of what Christian faith and practice should be. Indeed, Lewis says in his introduction that this text (or indeed, hardly any other he produced) will help in deciding between Christian denominations. While he describes himself as a 'very ordinary layman' in the Church of England, he looks to the broader picture of Christianity, particularly for those who have little or no background. The discussion of division points rarely wins a convert, Lewis observed, and so he leaves the issues of ecclesiology and high theology differences to 'experts'. Lewis is of course selling himself short in this regard, but it helps to reinforce his point. Lewis sees pain as an inevitable part of the human experience, given our condition of being estranged from God. He does not pain and suffering as being caused by God. 'The possibility of pain in inherent in the very existence of a world where souls can meet,' Lewis writes. 'When souls become wicked they will certainly use this possibility to hurt one another; and this, perhaps, accounts for four-fifths of the sufferings of men.' God has a role in that God is the creator of all things, and set things in motion, but God is not responsible in Lewis' view for the individual or corporate acts of humankind in contradiction of God's will. In this, Lewis does go against the Calvinist strain that goes through Anglican and other theologies. Lewis highlights part of the problem with pain in that it cannot be easily ignored. 'We can rest contentedly in our sins and our stupidities; and anyone who has watched gluttons shovelling down the most exquisite foods as if they did not know what they were eating, will admit that we can ignore even pleasure. But pain insists upon being attended to.' Lewis admits that this is a 'terrible instrument' that God uses to draw people back to God's will, and that it isn't always successful. In addressing the doctrine and idea of Hell, Lewis admits that this too is a terrible idea (in fact, he states it is an 'intolerable' one), but also states that this is not meant to be an intellectually satisfying or comprehensible doctrine, but rather a moral one. Lewis does hasten to state that people often confuse the imagery of Hell for the doctrine of Hell - the ideas of Dante et al. are very pervasive, and our conceptions of what is meant by Hell usually owes more to such sources than the actual Biblical text. Lewis also shows part of his method of biblical interpretation in different passages in this book. In the chapter on Animal Pain, he discusses the absence of statements in scripture about whether animals share in immortality. 'The complete silence of Scripture and Christian tradition on animal immortality is a

Published by Thriftbooks.com User , 19 years ago
A quick warning to those who have been pointed to this book but are not Christian: you are not the audience Lewis is speaking to. This book cannot be fully grasped in its original context without some degree of belief or acceptance of Christian doctrine. It is apologetics at its best, but cannot be considered in the "self-help" category like many contemporary titles are.That said, this must be the finest treatise on the apparent contradiction between the existence of pain and the existence of a supposedly loving God that has been written.Succint, well-organized, thorough, yet "The Problem of Pain" still reads like it was written by a human being rather than a scholar. Some chapters bring conviction. The chapter on Hell brings fear and dread, and respect for Him who can "destroy both body and soul in Hell". The chapter on Heaven, which Lewis admits is his own philosophical foray, no one else's -- brings hope and reassurance that Heaven is your true calling, your one True Home. This is not light reading, at least not at first. This may not be a book to recommend to someone at the height of a crisis; Lewis taxes your attention and does not take any short cuts. A "Cliff Notes" version of this book would miss the point. Pain is one of the toughest theological problems a Christian can face, either in their lives or the life of another person they know -- and Lewis does not want you going in armed with half an argument or some "Precious Moments" sentiment.From a non-Christian POV, I would be surprised if this book made much sense -- so many of the pillars are set on Christian theology, philosophy, and tradition. If you cannot (or will not) accept the possibility of the existence of Heaven, Hell, or God, this book will be just so much incomprehensible babble. But, as I said, it is not written for that segment of the market. This book is best read by the thinking Christian who has reservations about aspects of Christianity that seem to gloss over, avoid, or ignore the issue of human suffering.

Why we have pain

Published by Thriftbooks.com User , 22 years ago
Lewis analyzes the fundamental question, or problem, of pain: how can God be omnipotent and yet allow pain (war, injury, cruelty, etc.)? Lewis's answer has many levels. Foremost, is that nature had to be created with certain unchangeable properties. For example, the same hardness which allows wood to serve as a beam in my house allows it to serve as an instrument of potential injury, as when that beam collapses and hits my head. The world also had to be created neutral so that humans could interact equally with one another, i.e., those same, unchanging properties of wood allow it to be manipulated similarly by anyone. But, obviously a neutral world contains the potential for good or evil. Wood can be used to build a home, which is good, or to create a weapon, which is evil. But, this is what makes us human. We have free will. If I choose evil, God could not intervene. For to intervene some times but not others would be unjust and illogical (this is why miracles, if you believe in them, are extraordinarily rare). And to intervene once is to intervene always. Imagine if God intervened each time one person was going to cause another, or himself, pain. If he did, we all would be puppets, not humans. Another interesting idea in this book is that of Original Sin. According to Lewis, we have not inherited Adam's sin, as is commonly believed, but instead everyday face Adam's identical choice, perhaps thousands of times a day. For Adam's sin was not disobedience in eating the apple, but in choosing himself over God. Adam had the opportunity to see himself either as a creation or an individual self existing apart from God. Thus, according to Lewis, a final reason for pain, is that it is God's wake-up call that we have, in constantly choosing ourselves, chosen the wrong thing.This is a profound and provocative book.
Trustpilot
Copyright © 2022 Thriftbooks.com Terms of Use | Privacy Policy | Do Not Sell or Share My Personal Information | Accessibility Statement
ThriftBooks® and the ThriftBooks® logo are registered trademarks of Thrift Books Global, LLC