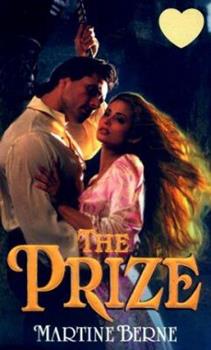 INNOCENCE UNDONE Adrianna was almost grateful to her Scottish abductor. At least now she was free of her dissolute brother and his efforts to force her into a wealthy marriage. But when Leith drew... This description may be from another edition of this product.

Published by Thriftbooks.com User , 21 years ago
The Prize - it is. This is sort of a 'typical' romance story. You know, boy meets girl, fall in love, run into a few difficulties along the way, there's a bad guy, but on the whole, live happily ever after kind of thing. The difference here is, it wasn't a frustrating story. Oh, it had its moments where I had my doubts. Being conditioned for the "big misunderstanding" I was waiting for it to happen. As it turns out loyalty and love played a major and satisfying role (no pun intended). I hesitate to give any book 5 stars because in my opinion, no one can compare with Stephanie Laurens. This book is comparable to Andrea Kane with a little more spice. In fairness, this is my first Martine Berne book and I would not hesitate to read another of hers. I wouldn't however wish to read this type of story consistently because the "big misunderstanding" does have its appeal no matter how annoyed I get. This was a nice change that I thoroughly enjoyed.Adrianna and Leith...........You read the synopsis so you know the story line. Leith loved Adrianna long before he admitted it to himself (big surprise). What I especially enjoyed was how hatred turned into love, respect and trust. Not only with Leith but with the clansmen as well. No, the clan didn't fall in love with Adrianna but they came to know her for herself and not what they expected or believed her to be. In the end, they respected her for the person she WAS. It was a strong lesson in prejudice as well. I only wish in reality people would realize the stupidity of any prejudice and it could be remedied as easily. There's sexual tension and descriptive love scenes. Not overdone but just right. All in all, I enjoyed this book and hope I've swayed you to try it. You will definitely get the feeling of things falling too neatly into place but for me, it was a nice change. PS I'm still not convinced what is worn beneath a kilt. If you know, let me know. I'm awful curious.

Acclaim for "The Prize"

Published by Thriftbooks.com User , 21 years ago
It is hard, so to speak, for a romance novel to fire the passions the way The Prize does.Ms. Berne writes with style far above the average "bodice ripper" and creates whole characters with historical accuracy. Leith and Adrianna come alive between the pages. I especially loved the sense of the highlands and am eagerly anticipating The Rogue.Keep it up, Martene.

This book IS a Prize!

Published by Thriftbooks.com User , 21 years ago
I enjoyed this book so much I finished it in less than 2 days. I couldn't put it down! I'll relay the main idea behind the story - I don't want to ruin it but I see there is no description of the story here. The lead characters are Leith and Adrianna. He is laird of the Campbell clan and she is the daughter of a late English earl who has been away in a convent for 12 years and wants to be a nun. Leith wants vengence on Adrianna's father for a past wrong but finds out that the old Earl is dead and Adrianna's lowlife brother is in his place, so Leith spirits Adrianna away with him to Scotland instead - as his prize. From there on the book only gets better - from first page to last! Adrianna is kind, sweet tempered, generous, compassionate and has skills as a healer. Leith is strong, brave, honorable, passionate and loyal. They will both steal your heart.
Copyright © 2022 Thriftbooks.com Terms of Use | Privacy Policy | Do Not Sell My Personal Information | Accessibility Statement
ThriftBooks® and the ThriftBooks® logo are registered trademarks of Thrift Books Global, LLC