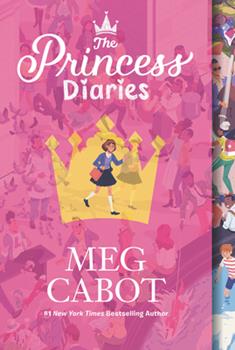 (Book #1 in the The Princess Diaries Series)

The one and only Mia Thermopolis is back and ready to reign Celebrate the 20th anniversary of Meg Cabot's blockbuster series in royal style--with all-new middle grade editions of the first three books Mia Thermopolis is pretty sure there's nothing worse than being a five-foot-nine, flat-chested freshman, who also happens to be flunking Algebra. Is she ever in for a surprise. First Mom announces that she's dating Mia's Algebra teacher. Then Dad has...

Published by - , 2 months ago
Really great series for younger children. It goes through topics in an age-appropriate way and follows Mia as she is growing up.

One of the best diaries I've read all year

Published by Thriftbooks.com User , 19 years ago
The Princess Diaries gets two enthusiastic thumbs-up from me! This book was extremely cute and funny. The writing was very "authentically teenage" and the characters were an absolute treat. A very quick read and enjoyable to the last page.High school freshman, Mia Thermopolis, just wants to be normal... Oh, and to have the school's hottest guy, Josh Richter, to fall madly in love with her, but she knows THAT will never happen. Then something very terrible happens: her father, after finding out he can no longer have any other children, tells Mia she is the heir to the throne of his small, European home, Genovia. Excuse me?! So that would make her...a PRINCESS!! Most girls would fall all over themselves with excitement, but for Mia, who just wants to be your average teenage high school freshman, vows to keep this disturbing news all to herself. Well, as if THAT would ever happen...So cute, so refreshing, so fun to read. Deals with regular adolescent tribulations, as well as some that only happen in dreams, i.e., becoming a princess overnight. I highly recommend The Princess Diaries to teens and grown-ups alike. It has all the best qualities and is a great way to spend an entertaining afternoon. I am not even kidding.

Published by Thriftbooks.com User , 20 years ago
Princess Diaries isn't some predictable book, and it isn't about some snobby stuck up, already popular girl who becomes a princess. It is a story of a girl (15 years old) that has never had a date, sucks at algebra, and her mom is dating her algebra teacher(YUCK!!!)  One day though everything changes because her dad can't have kids anymore, which makes Mia the heir of the throne for a small country no one has even ever heard of!!!!!  She tries to keep the news that she is a princess a secret, but someone tells the newspaper that all about it.  Now, of course, everyone knows she is a princess and now she is Ms. Popular, someone she has always dreamed about being.  Of course, her friend Lilly gets mad at her, and things just grow, and grow, and grow until it is almost unbearable for Mia. Will Mia ever get her life back?   All and all this was a very entertaining book, and I couldn't put it down.  It is probably one of my all time fav's and I'm a teen.  SO, I hope I have inspired you to read this book, and thanks for reading my review!!!!!!!!!!!!!:)

"A Book To Feast Your Eyes On!"

Published by Thriftbooks.com User , 20 years ago
Mia Thermopolis, a freshman at Albert Einstein High, thinks of herself as a freak. That is a five foot nine, flat chested, size ten shoed freak. And to add to her High School/teenage troubles, she is acquainted with an "F" in Algebra I. Well, Mia's mom, who is separated but never married, just happens to fall in love with Mr. Gianini, Mia's Algebra I teacher. Months later, Mia receives a phone call from her dad, who lives in a small country by the name of Genovia. Due to the chemotherapy he had gone through to treat his testicular cancer, he had become permanently sterile. Mia, as his only child,finds out that her dad is Prince Artur Christoff Phillipe Gerard Grimaldi Renaldo of Genovia. In less than a minute she went from Mia Thermopolis to Princess Amelia Mignonette Grimaldi Thermopolis Renaldo of Genovia, the heir to the throne. Unlike any other teenager, she did not want to be a princess. She wanted to stay just the way she was, an unpopular, odd, Manhattan schoolgirl who had an obsessive crush on the hottest senior in school, Josh Richter. This ordeal was only the least of her worries. The news broke out about her royal heritage, which was when she all of the sudden became popular. The school's Cultural Diversity Dance was coming up soon, but she didn't have a date. The day before the dance, Josh asked Mia to be his date. For dinner, they met up with his "entourage". Finally, an hour after the dance started, they hitched a ride in a limo to the school where hundreds of reporters were awaiting. Mia then realized that Josh had only used her for publicity and popularity, and didn't even know her. She dumped him immediately and walked into the dance. Then she was greeted by all of her friends, who liked her for who she was, and not what she owned.

Published by Thriftbooks.com User , 20 years ago
I never read books but this one catched my eye. The Princess Diaries was so entertaining and very well written. Mia, the main character seemed like a typical teenage girl, which makes it very easy to relate to. I hope that Meg Cabot will make more stories about Mia and her family and friends. I want to tell everyone to pick up a copy of this book!! Its worth the price!!

Teenage Angst at it's Best

Published by Thriftbooks.com User , 21 years ago
Not since Judy Blume has a writer so skillfully navigated the mind of a teenage girl. The Princess Diaries tells, through her own words, the story of a typical high school freshman's discovery that she is the princess of a small European principality (a-la Monaco). Mia is a typically gawky 15 year-old with all the problems that come with this age---flat chest, feet too big, bad hair, cute boy doesn't khow she is alive, etc. etc. Meg Cabot does a phenomenal job of making this everyday teenage angst funny, exciting, scary, and exhilarating. As a male reader, Cabot allowed me inside the mind of this difficult teenage phase. Any girl in junior high or high school will love this book, and any guy willing to get past the pink cover will love it too!
Copyright © 2020 Thriftbooks.com Terms of Use | Privacy Policy | Do Not Sell My Personal Information | Accessibility Statement
ThriftBooks® and the ThriftBooks® logo are registered trademarks of Thrift Books Global, LLC