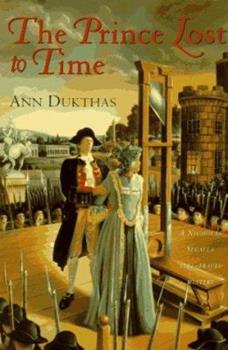 The Prince Lost to Time

(Book #2 in the Nicholas Segalla Series)

Paris, 1815. A shadow of uncertainty hangs over the nation's future as long as one question remains unanswered. What is the real fate of the young Dauphin, held prisoner in the Temple where his mother Marie Antoinette spent her last days? History says he died, but rumors persist that he escaped. The answer holds interest for the British government, which sends time-traveling sleuth Nicholas Segalla to uncover the truth. Martin's Press.

The Time Lord Solver of Mysteries

Published by Thriftbooks.com User , 16 years ago
This is a novel by Paul Doherty writing under the pseudonym of Ann Dukthas. Paul Doherty is the consummate professional when it comes to writing historical mystery novels. I for one do not know how he can be so prolific with his offering of books and yet make sure that each of them is well researched. Whether they be 13th, 14th, or fifteenth century they are always true to the period. He also writes about Ancient Egypt and the Greek period in history of Alexander the Great. The second book in the Nicholas Segalla series which features him as a time travelling murder mystery investigator. The year is 1815 the place Paris, France. What is the fate of the Dauphin who has been held prisoner in the Temple where his famous mother Marie Antoinette spent her last days on earth? The history books state that he died but also many rumours abounded that he escaped. The answer holds some interest for the British government whop send Nicholas Segalla. What better man to confirm or deny the evidence than Nicholas, the time travelling mystery solver extraordinaire.

An interesting spin on a classic mystery

Published by Thriftbooks.com User , 22 years ago
What happened to the Dauphin? Historians have long debated as to whether he died soon after his parents or escaped and lived under an alias.In this book time-travelling sleuth Nicholas Segalla offers his version of the tale. In fact Segalla himself is often more interesting than the stories he tells - an immortal detective who claims to have been present at the Battle of Hastings and also knew Lenin! Bring on the book that reveals his past!
Trustpilot
Copyright © 2022 Thriftbooks.com Terms of Use | Privacy Policy | Do Not Sell or Share My Personal Information | Accessibility Statement
ThriftBooks® and the ThriftBooks® logo are registered trademarks of Thrift Books Global, LLC