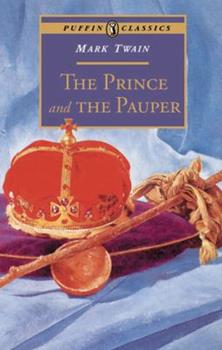 Tom Canty and Edward Tudor could have been identical twins. Their birthdays and their faces match, but there the likeness stops. For Edward is prince, heir to King Henry VIII of England, whilst Tom is a miserable pauper. But fate intervenes, and their identities become confused. Soon the prince is thrown out of the palace in rags, leaving ignorant Tom to play the part of a royal prince.

Published by Thriftbooks.com User , 16 years ago
The Prince and The Pauper by Mark Twain A palace. The streets. Two boys-one a prince, the other a homeless beggar. Edward Tudor is a prince that is always bored. Tom Canty is a beggar that is always beat...when fate brings them together; they decide that it would be fun to switch clothes. Since they are the same age and have the same features, this should be easy...not! Edward sees what he has to do to be a beggar. Tom finds out that being a prince is no joke. Mark Twain's colorful language tells you a lot about how the families feel when the boys are born. For example, on page 7. "Tom Canty was born to a family who wore raggedy clothes and lived in a one room house. To them the newborn was just another unwelcome mouth to feed." When Edward was born, as you can imagine, there was a huge celebration! See the difference? There's a huge one! When the book ended, I thought of it as a river because I wanted to book to never end like a river keeps flowing. The characters are so real that it feels like you are in the book holding on to their hand. When they have a problem you want to help them and you start to care about them. The character's problems are not childish, but they are not like problems we have. In the book they are a bit more unique. The illustrations fit wonderfully with the book because it helps you understand the book better. Under the illustration it has a sentence about what the picture is about. It usually is the most important sentence on the page. The incredible details create powerful mind pictures. When Tom's nose started to itch, the details made my nose itch to! Once you start the book, you will not be able to put it down (trust me on this)! The book grabs your attention and steals your heart! Action, adventure, suspense, details, and great illustrations are in this amazing book: The Prince and The Pauper! What are you still doing, reading this? Pick up the book! By Sum 1 Special

Published by Thriftbooks.com User , 17 years ago
The Prince and the Pauper was written by Mark Twain in 1882. Although 33 chapters and 209 pages are sandwiched between this book's covers, it is a work that is meant to be chewed slowly, and digested carefully. The Prince and the Pauper is a literary feast, but if you aren't careful, you will get indigestion. Set in England, during the reign of Henry the Eighth, this tale is enticingly sweet. Twain's story begins in not one place, but in two utterly diverse locations: the king's palace, and the lowly, cramped rooms of Offal Court. In one situation, a lofty lord is born, but in the other, humble Tom Canty arrives to trouble his family with another mouth to feed. The entire nation rejoices with the birth of the prince, but no one heeds the pauper. Later in the story, lovable, loyal characters such as Miles Hendon and princess Elizabeth are brought out of Twain's vast menagerie of actors. The protagoni, the Prince Edward and Tom Canty, act entirely different from one another, but look exactly alike. Trouble first begins when Tom and Edward playfully switch places, and Tom is left in the palace as the real prince leaves seeking entertainment. When he is harassed, a heroic warrior jumps to the misplaced monarch's defense. Meanwhile, poor Tom Canty of Offal Court is belabored by the wearisome customs of the court. Without warning, the King Henry the Eighth dies, leaving his "son" to the throne. Back in the streets of London, the prince is captured by Tom Canty's father, who takes him for his own son. With Miles Hendon hounding his steps, Canty falls in with a band of vagabonds. Fortunately, the prince escapes, but only to be attacked by a crazed hermit who thinks that he is a "mere archangel" with a claim to the papacy. Slowly the time passes for poor, nervous Tom Canty, with his coronation drawing closer. After a while, he develops a taste for life at court, and begins to fear the possibility of the real prince's return. Recaptured by John Canty, Edward re-escapes to Miles Hendon, who is on a journey to recover his rightful lands from his treacherous brother, Hugh Hendon. In all of his travels, the prince, (who now considers himself king because of his father's death) realizes how cruel English punishment really is, especially when Miles is put to the pillory, and bears the lashes of the whip. Finally, the day of coronation is at hand, and Tom Canty is actually looking forward to the pomp and glory of the ceremony. Proudly he greets his people, without a thought to his old family, until he spots his mother with the crowd. At Westminster Abbey, he was about to accept his crown, when the actual prince shouted out: "I forbid you to set the crown of England on that forfeited head. I am the king!" In a moment of truth, Tom Canty proves that Edward is really all that he claims to be, explaining their foolish exchange of clothing. The populace is amazed, and Edward inherits the crown of England. Twain seizes one with a gentle j

Published by Thriftbooks.com User , 17 years ago
(...)This book is about two boys who were born on the same year, same day, but are still very different. One was the prince of England, while the other was a peasant. One day, the prince was taking a walk around his castle, when he saw a peasant being kicked around by a gaurd. the prince brought the boy into his castle. Then they noticed how similar they looked, and decided to see how they would look in each other's clothes. Thats how the problem began. The prince mistakenly was kicked out of the castle, and the peasant remained trapped within the castle.(...)The things I liked about this book were when the prince and the pauper were at the ceremony being asked questions, when the pauper changed clothes, and when the royal adviser thought that the prince has gone mad.The events that I didn't like about this book were when Miles Hendon was being tortured, when the prince was forced to steal, and when the prince was about to be killed by the hermit.My favorite part of this book was when prince Edward and the pauper Tom got back together.

Published by Thriftbooks.com User , 17 years ago
This novel by Mark Twain is truly a timeless piece of literature. It's story line is one that any young boy would love to live. It depicts the situation of a young pauper and a prince who accidentally switch places. It is a easy read, and the dialect is shown very well through out Mark Twains writings. I very much enjoyed reading the book, and I feel that most people would find the book humorous, full of adventure, and fun to read.

"The Prince and the Pauper" was a great book!

Published by Thriftbooks.com User , 19 years ago
I thoroughly enjoyed reading this great classic. It was very interesting and had me hooked onto it through the whole story. This story is about how the beggar named Tom Candy and Prince Edward meet and discover that they were both completely identical, except for their clothes. They switch their clothes and change places. Then, each of the two boys have to live through a terrible life of each other. The Prince is beaten, called names, starved, and has to live the life of a beggar. Tom or the Pauper has to go through laws, diplomacy, languages, and royalty. Both of them are considered mad as they try to tell the truth to everyone. Suddenly, the little tiny thing of switching places turns out to be a humongous problem as Prince Edward's father, Henry VIII dies. Tom, who is thought as the Prince, is naturally supposed to be the next king. Both boys has to find each other or else the Pauper would become the wrong king of the nation.This book is very interestingly written. I started reading this once, but I had a better book(or I thought it was a better book) to read so I stopped. Then, I decided to just finish reading "The Prince and the Pauper" and thought that it was just a great and interesting book! I think that this is a great book to read because it's quite witty, interesting, great, and very well written.
Copyright © 2020 Thriftbooks.com Terms of Use | Privacy Policy | Do Not Sell My Personal Information | Accessibility Statement
ThriftBooks® and the ThriftBooks® logo are registered trademarks of Thrift Books Global, LLC