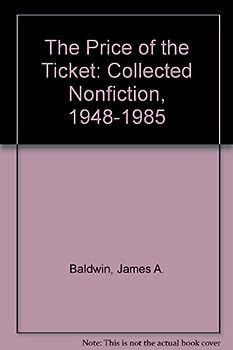 The works of James Baldwin constitute one of the major contributions to American literature in the twentieth century, and nowhere is this more evident than in The Price of the Ticket, a compendium of nearly fifty years of Baldwin's powerful nonfiction writing. With truth and insight, these personal, prophetic works speak to the heart of the experience of race and identity in the United States. Here are the full texts of Notes of a Native Son, Nobody...

The 3rd Eye of James Baldwin

Published by Thriftbooks.com User , 15 years ago
Let me qualify my review by first telling you that I have read EVERY SINGLE PUBLISHED WORK by James Baldwin with the exception of one and that is because it is a first edition that I can't stand to crack along the spine. James Baldwin was and still is prolific- to say the least. He has the ability to distinguish both his objective and subjective observations in a single essay. He is the proliferation of the duo consciousness in America. His observations of social and political mores is nearly unparalleled for their relevance both yesterday and today. This is an outstanding compliment to the author but sad commentary on the state of US world, racial, environmental, social and sexual politics in 2007. The Price of the Ticket is an absolute must read!

If They Take You In the Morning

Published by Thriftbooks.com User , 15 years ago
I remember the first time I realized that James Baldwin was a genius. I picked up one of Angela Davis's autobiographies. I found one of the most beautifully crafted letters ever exchanged from one writer to another. And with one five page letter, I fell in love. I am certain that The Price of the Ticket must be one of the greatest collections of essays ever bound into a single volume. If someone would like to challenge that, please be my guest. And, I believe that James Baldwin is probably the second most widley quoted African American writer in epithets, speeches and dedications after Martin Luther King. I admit, I have no statistical data to support these claims. I have no quantitative proof. Just keep your eyes and ears open and you will understand what I mean. Whether it was the text Many Thousands Gone I read in An African History course on Slavery, or the article entitled The Price of the Ticket that I discovered in my Art History course. Baldwin has left an indelible mark on history. James warned us that, "It is very nearly impossible, after all, to become an educated person in a country so distrustful of the independent mind." (The Can't Turn Back) He proved to us that, "freedom is not something that anybody can be given; freedom is something people take and people are as free as they want to be." (Notes for a Hypothetical Novel) Long before Morrison & Cose explanation of the Envy of the World we knew, "alas, that to be an American Negro Male is also to be a kind of walking phallic symbol: which means that one pays, in one's own personality, for the sexual insecurity of others." (The Black Boy Looks at the White Boy) Before Mumia reminded us Baldwin informed us, "What passes for identity in America is a serise of myths about one's heroic ancestors. It's astounding to me, for example that so many people really appear to believe that the country was founded by a band of heroes who wanted to be free." (A Talk to Teachers) And years later we still have not grasped the fact that, "Guilt is a luxury we can no longer afford." (Words of a Native Son) Perhaps Genovese was smiling when Baldwin wrote, "We won our Christianity, our faith, at the point of a gun, not because of the example afforded by white Christains, but in spite of it. It was very difficult to become a Christian if you were a black man on a slave ship, and the slave ship was called "The Good Ship Jesus." Perhaps the scarriest thing that Baldwin has showed us, is how seldom things change. Any writer, I suppose, feels that the world into which he was born is nothing less than a conspiracy against the cultivation of his talent. Talent is not to be ignored. Dreams are to be followed, Challenges are to be faced and Art is to be created.

Published by Thriftbooks.com User , 19 years ago
This is a collection of nonfiction from James Baldwin's illustrious career: essays, book excerpts and movie/book reviews. I have read it many times and never get tired of it. What more can I say?

Published by Thriftbooks.com User , 20 years ago
Baldwin was a great writer, not only because he told a compelling story, but because he wanted his work to change the world he lived in and, on some levels, it did. No other example of this intention is more apprant than Baldwin's non-fiction work. His essays are timely (even now), filled with biting intelect, and brimming with his trademark ability to wind around an issue.This book is all the more relevant because it saves you time: it collects his 3 book-length essays ("Fire Next Time", "No name In The Street" and "The Devil Finds Work"), as well as a ton of other pieces. It's almost totally comprehensive in this respect. Revealing and a more than trustworthy look at the man from his own mouth, and over the years.

Published by Thriftbooks.com User , 21 years ago
With the possible exception of Tom Paine and Gore Vidal, Baldwin is the finest essayist. Most of his non-fiction is here, including his groundbreaking essay "Fifth Avenue, Uptown," the best single essay I have ever read. Of special interest, as one who enjoys movie criticism, is the entire book "The Devil Finds Work," in which Baldwin happily takes apart a number of American classic films. I was never wild about Baldwin's fiction, but no one could top him as an essayist. If you are buying one American non-fiction book, this should be the one.
Trustpilot
Copyright © 2022 Thriftbooks.com Terms of Use | Privacy Policy | Do Not Sell or Share My Personal Information | Accessibility Statement
ThriftBooks® and the ThriftBooks® logo are registered trademarks of Thrift Books Global, LLC