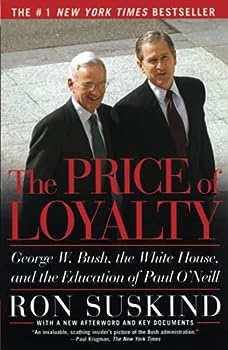 The Price of Loyalty: George W. Bush, the White House, and the Education of Paul O'Neill

Examines the inner operations of the administration of George W. Bush through the experiences and assessments of former Secretary of the Treasury Paul O'Neill. This description may be from another edition of this product.

Lord, can conservatives read at all? Or only spin?

Published by Thriftbooks.com User , 18 years ago
What stuns me with all the one-star reviews is the fact that they so clearly haven't read the book. This book isn't about Paul O'Neill: it is about the blind dedication of people inside the Bush White House to policies that are determined by politics and not by data and information. O'Neill emerges as someone who carefully sifts information, takes a naturally conservative approach to issues, and does not like to recommend any policy that is based on speculation or insufficient evidence.The book shows that a number of White House insiders or heads of government institutions (notably Alan Greenspan at the Fed) are not very comfortable with the ideologues currently running the White House. Lost in a lot of the attention that O'Neill is getting is the fact that other White House folk have also spoken off record. Reading the book--and I generally find it is easier to talk about something you have actually read instead of something you merely make up in your head--it is pretty certain that Alan Greenspan was also interviewed for the book and is one of those who spoke off the record. I would also bet that Christine Todd Whitman, former head of the EPA (another one who wanted policy to be based on verified data), was another. It is absolutely definite that either Colin Powell or several members of the State Department (unquestionably with his blessing) cooperated in the making of the book. Possibly other nonideologues like Condileeza Rice or one of her aides talked with Suskind. The mistake that many are making is assuming that O'Neill is merely doing this out of revenge. It is almost impossible to support that theory after reading the book. I think the is one of the most important books that has been published in the past two years on any subject. The Bush White House has largely been an impenetrable bastion. Now we have a vivid picture of the inner workings of the White House as presented by multiple insiders, most speaking off the record because they are still working for Bush. But O'Neill and the massive amount of documentation he provided for Suskind has performed a huge public service. I don't think anyone should consider voting for George W. Bush in 2004 unless they have read this book first.

First Hand Insight Into this Administration

Published by Thriftbooks.com User , 18 years ago
For those of you saying that this book is complete rubbish, consider how well Mr. Ron Suskind has documented his work. His work is supported by interviews with countless people within the administration, from cabinet-level officials to executive assistants, who spoke either off the record or because of Mr. O'Neill's example. Also, O'Neill provided Suskind with a CD-ROM containing 19,000 xeroxed documents rendering his 2 years as the secretary of the treasury. Everything from hundred page reports to hand scribbled notes are included. How anyone could argue that Paul O'Neill is being anything but genuine in the face of such hard evidence is beyond me. Every public move the president makes is so carefully crafted that he is unknown to many Americans. By providing an inside look at the president on a daily basis, this book will allow people to finally know the true nature of president Bush. Read this book, it is vital reading for making an informed decision this November.

Published by Thriftbooks.com User , 18 years ago
Reading Paul O'Neill's book on his experiences as Secretary of the Treasury in the Bush administration harkens memories of the Reagan White House. While Ronald Reagan, particularly in the latter period of his second term in the eighties, was criticized for being disengaged and letting others govern for him while he sought to maintain an effective image of the presidency, nobody went so far as to say, as O'Neill did regarding Bush, that walking into a meeting with him was like "talking to a blind man in a room with deaf people."It has been said of George W. Bush that, even if he receives a memo outlining important subject matter, he will ask that the two or three most important points be underlined, saving him the effort of reading the entire outline. The worst said about Reagan in a similar vein was that, when Secretary of State James Baker provided him with a fact sheet concerning an upcoming summit meeting with Russian president Mikhail Gorbachev, that he told him he had watched "The Sound of Music" on television instead of reading it. It appears that reports of Vice President Richard Cheney making major decisions in the Bush White House has more than a little substance behind it, considering revelations in this book confirming that view. For instance, pertaining to the second huge tax cut embraced by the White House, O'Neill stated that Bush initially expressed surprise, saying that he thought the "rich people" had received enough support through the initial tax cut. Cheney reportedly pressed the point for a second tax cut, indicating that it was important to grab the mantle and press the point further.O'Neill also writes about the basis for conflict with Iraq, and when Bush considered going to war. Confirming many other accounts asserting that the decision was made well before September 11, and that Cheney stood in the forefront of the effort, Bush then fell into line and planning commenced in earnest to confront Saddam Hussein.The issue arises as to whether O'Neill's disclosures embody revenge of a fired cabinet member. His detailed explanation of what occurred, however, appears credible, indicating that he was pushed out due to a fundamental policy difference with the Bush administration. As a former president of Alcoa who was aware of the need to maintain debt free footing to achieve success, he emphatically opposed a tax cut policy that could push America deeply into debt. Cheney and the administration's major players did not want someone who clashed with what they felt to be an imperative, a policy of tax cuts on the assumption that added revenue would prevent the arrival of huge deficits.The announcement that the administration is investigating whether O'Neill made available information from classified documents has probably achieved for him the same result as Fox Television's lawsuit against Al Franken. The added exposure amid controversy should push the book to greater heights of popularity with the mass market of the readin

Published by Thriftbooks.com User , 18 years ago
This book answers the question: can an honest, forthright, free-thinking, analytical person survive in the Bush Administration? O'Neil has heroically revealed what many of us suspected all along: Bush lacks the knowledge, curiosity and intellect to be our Commander-in-Chief. Bush's carefully-crafted image (reading off teleprompters and cue cards) has been perpetuated by a conspiracy of silence at the top-- until now. Not until O'Neil's brave tome did any Cabinet-level person admit that this emporer has no clothes, that he is in fact the blankest of slates, a conduit through which the inflexible, politcally-driven, exteme ideologies of Cheney, Wolfowitz, Rove, Rumsfeld & Co. are channeled. O'Neil has provided the public with a glimpse of Bush that one only finds at rarely- televised live press conferences featuring our president with another World Leader. Hapless without cue cards, Bush's blank-eyed, stumbling, bumbling, inarticulate, embarrassing performances contrasted with the intelligent, complex and analytical comments of his counterpart (Blair comes to mind) offer the starkest view of who he really is.Bush does not read newspapers, watch televised news, and does not write his own speeches and commentary; of course he can not. Everything he 'knows' he is 'told' by others. So who is crafting policy and running our country? What is really going on? Paul O'Neil's eyewitness account is the best glimpse to date behind the otherwise inpenetrable wall that protects the public from the truth about this president and his administration.Buy this book and make up your own mind.

Published by Thriftbooks.com User , 18 years ago
Ron Suskind, thanks to Paul O'Neil, has written an excellent book giving us much insight on the inner workings of the White House. Suskind is a former Wall Street Journal writer. And, it shows. The substance of the book is dense with information and documentation. But, the prose is lively and easy to read. According to the former Secretary of the Treasury, Bush and Cheney dominate the White House. Bush leads based on stubbornly held personal opinions, and Cheney executes the plans reflecting the President's opinions. Occasionally, Cheney feeds opinion to Bush when the latter has none to begin with. But, everyone else is just there to make a case for supporting these same opinions. Thus, most of the Presidential decisions are not well founded in objective intelligence. Within this managerial climate, there is no room for intellectual debates, exchange of information, or even consensus building. It is pretty much Bush and Cheney's ways or the highway. Paul O'Neil, an intelligent, assertive, and independent thinker, did not fit within these parameters, and Cheney quickly showed him the next highway exit.When Paul O'Neil was recruited as Secretary of the Treasury, he seemed to fit very well with the Administration. He fit perfectly the mold of the old guard intelligentia who had reached the top level in business, with also much government experience. He is definitely a conservative, pro business fellow. He seemed just another of the old boys. But, things did not turn out that way. Paul O'Neil, an independent thinker, ended up clashing at every turn with the Administration. He is a conservative. But, that does not mean he is a unilateralist in foreign policy. Thus, he felt highly uncomfortable with the lack of strong international support for our invading Iraq. On the domestic front, O'Neil felt very uncomfortable with the progressive dismantling of our strong fiscal position we had inherited from the Clinton White House. For him being conservative also means fiscally conservative. It does not mean unraveling the Federal government. O'Neil felt strongly that beyond the first tax cut that was necessary, the following rounds of tax cutes were dangerous as they created a rising structural budget deficit. Finally, with his strong background in business and economics, he felt that the steel tariffs were totally unjustified and would trigger a rise in trade conflicts and unfruitful WTO trade negotiations.If you objectively review O'Neil's positions, he is typically right. And, the Bush-Cheney team is not. Our level of unilateralism can easily be considered excessive. The rounds of tax cuts were much too deep and did create a rising structural deficit. Also, the steel tariffs did poison the WTO round at Cancun and the overall worldwide trading climate. Recently, under pressure of penalties from the WTO, Bush had to eliminate these same steel trade tariffs. The later did not achieve anything besides political embarrassment in
Trustpilot
Copyright © 2022 Thriftbooks.com Terms of Use | Privacy Policy | Do Not Sell My Personal Information | Accessibility Statement
ThriftBooks® and the ThriftBooks® logo are registered trademarks of Thrift Books Global, LLC