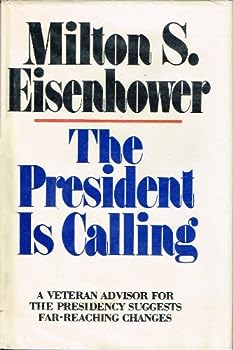 The President Is Calling

Milton S. Eisenhower may be the only living American who has served every president since Coolidge. He helped shape agricultural policy under Coolidge and Hoover; carried out sensitive war assignments... This description may be from another edition of this product.

Published by Thriftbooks.com User , 14 years ago
Milton Eisenhower does a fantastic job in sharing his insights into several political situations he was involved in as several presidents, including his brother, Dwight, call upon him to assist in these situations. It is obvious that he and Dwight had a close relationship. Milton shares insights that heretofore were not known, certainly not known to me as an avid student of both history at the beginning and political science at the end of my college years. One chapter is dedicated to the Eisenhower family; that is, his parents, his five brothers, and himself. The other chapters all deal with political episodes and, as such, give the reader some valuable insights into what recent U. S. presidents have had to deal with. The book is very well-written and holds the reader's attention from the beginning to the end.
Trustpilot
Copyright © 2022 Thriftbooks.com Terms of Use | Privacy Policy | Do Not Sell My Personal Information | Cookie Preferences | Accessibility Statement
ThriftBooks® and the ThriftBooks® logo are registered trademarks of Thrift Books Global, LLC