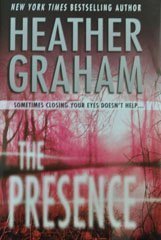 (Part of the Harrison Investigation Series)

This description may be from another edition of this product. The Presence by Heather Graham released on Aug 25, 2004 is available now for purchase.

Published by Thriftbooks.com User , 13 years ago
Tony Fraser and her friends think they have hit on the ultimate money-making plan. Buy an ancient run down Scottish Castle. Turn it into a tourist destination. Sweep visitors into a reenactment that combines fact and fiction, complete with local history, murder, and an imaginary laird named Bruce Macniall. But when the castle's actual owner--a tall, dark, and firmidable Scot who shares the fictional laird's name--comes charging in, Toni is shocked. How is it possible he even exists? Tony invented Bruce Macniall for the performance...yet every partical of his being is eerily familiar. Soon the group is drawn into a real life murder mystery; young women are being killed, their bodies dumped nearby. And Tony is having sinister life-like dreams in which she sees through the eyes of the killer--dreams that suggest a connection to Laird Macniall. Bruce claims he wants to help catch the murdrer. But can Toni trust him...especially when his ghostly double wanders the forest in the black of night?

Published by Thriftbooks.com User , 17 years ago
Toni Fraser and her friends have come to Scotland to rent a run-down castle and turn it into a tourist attraction by putting on medieval performances that combine fact and fiction. This will include local history, murder and an imaginary laird named Bruce MacNiall. But when the actual castle's owner comes charging in on his great black horse and claims to be Laird Bruce MacNiall, Toni is shocked because she had invented him. However, every part of him is eerily familiar. Soon the group is drawn into a real-life murder mystery involving a serial killer who is killing women and dumping them in the nearby forest. Toni begins having life-like dreams in which she sees through the eyes of the killer--dreams that suggest a connection to Laird MacNiall. I thoroughly enjoyed this book. It has a number of elements to keep you interested throughout. The mystery of how Toni invented a living man; the mystery of who rented them the castle when Bruce did not give his approval; the mystery of who is killing the women and why. Not only does this keep you totally involved, but periodically throughout the book Graham skips back to medieval times with a storyline involving the original Bruce MacNiall. I would highly recommend this book.

Good book, but too many different styles

Published by Thriftbooks.com User , 17 years ago
I enjoyed reading The Presence, but it did have some problems that might bother other readers who aren't already fans of Ms. Graham's. The story is a blend of historical romance, contemporary thriller, light humorous romance with a little ghost story tossed in too. Each of the elements is okay and the author blended them all in an interesting way, but the book would have been better if the author has perhaps used one or two less of them and concentrated more on the others. I was left with the impression that three short stories by different authors had been shuffled together. The paranormal part was perhaps the weakest to me. The heroine is supposedly a very, very strong psychic and the opening chapter is pretty dark and violent. It leads you to believe the rest of the book will be similar, and there are parts that are, but mostly, the seriousness of the opening isn't carried through. The main portion of the book is made up of the light, contemporary romance of the new Laird MacNiall and heroine Toni. Of course, both are the spitting images of the old Laird and Annalise, setting up the ghost story. The relationship between Toni and MacNiall is written well and is the best part of the book. Their dialogue is funny and the romance is steamy. MacNiall is a very old-fashioned hero most of the time and Toni is probably the epitome of a feisty American. The worst parts: the big serial killer murder mystery is a huge dud. One victim isn't even a victim, the killer has the strangest motive, there are implausible red herrings and resolutions everywhere and the supporting characters are inconsistent (Gina, Ryan and Thayer, in particular). The promise of a dark paranormal psychic story is unfulfilled for the most part; the heavy and atmospheric quality of the psychic storyline is diluted very heavily by the other areas. This was still a good book and was an easy read over the course of an afternoon. I liked the lead characters a lot, but felt overall the author muddied up their story in the interest of producing a paranormal story similar to Kay Hooper's writing. This appears to be the beginning of a series, also very much like Hooper's, with an older man heading up a group of psychic detectives.

Published by Thriftbooks.com User , 17 years ago
This book is a must read. I had a really hard time putting it down. It has a fantastic plot and a cast of characters that will make you laugh. I just loved the touch of suspense that kept me guessing to the end. This is a wonderful book by one of my favorite authors.

Published by Thriftbooks.com User , 17 years ago
I love the paranomal. When I started this book and saw it was a romance book too, I was incline to put it down but then I got into the story and couldn't put it down! I'm not a romance novel reader but mixed with a good paranormal story it was better then I thought! I was shocked at the ending cause I thought I figured it out!
Copyright © 2020 Thriftbooks.com Terms of Use | Privacy Policy | Do Not Sell My Personal Information | Accessibility Statement
ThriftBooks® and the ThriftBooks® logo are registered trademarks of Thrift Books Global, LLC