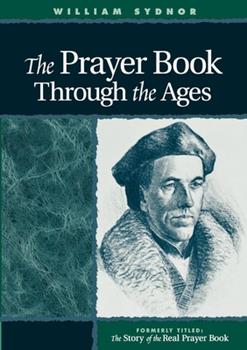 The Prayer Book Through the Ages: A Revised Edition of the Story of the Real Prayer Book

An exploration of the history of the Book of Common Prayer and its revisions, beginning with the 1549 English Prayer Book and continuing up to the present. This revised and expanded version finishes the story of the final adoption of the 1979 Book of Common Prayer. Sydnor explores why each revision was necessary, what was changed, added, omitted, as well as what was retained in the "new" book.By understanding the delicate balance between the need...

An excellent explanation of revisions.

Published by Thriftbooks.com User , 23 years ago
As an Episcopalian, I have heard numerous comments over the past 20 years about the 1979 Book of Common Prayer, the last version adopted by the Episcopal Church. This book clearly explains how the book came into existence in England in the 16th century, and was subsequently revised 7 times. It makes the reasons for the changes very clear, as it makes very clear the need for making changes. Anyone who has resisted the changes should at least try to understand why they were made. This is the place to learn those reasons.

Published by Thriftbooks.com User , 23 years ago
This book brought the crafting of the Prayer Book painfully alive - Made me more fully appreciate the religious freedoms we enjoy in the US. I did not fully understand what non-separation of church and state could mean in the very real and often bloody events of those times. Yet underneath the politics, there is a very real core of spirituality that shines through.

Excellent history of the Book of Common Prayer

Published by Thriftbooks.com User , 23 years ago
This is the first edition title which is now out-of-print. Please see the new 1997 second edition, 156 pages, which has been retitled to "The Prayer Book Through the Ages" ISBN 0-08192-1509-0, paperback, Morehouse Publishing. There are 12 short chapters, each interesting and quickly read, that lead the reader from the first English Book of Common Prayer in 1549 to the latest edition of 1979. Protestants of all denominations owe a considerable debt to the Anglican Church for the Book of Common Prayer. The author is Reverend William Sydnor, a retired Episcopal priest, who served for several decades at the National Cathedral in Washington, DC. He is well qualified to write this book and it has been carefully researched. Of particular interest will be Chapter VI, the first American Prayer Book in 1789. This was shortly after the American Revolution, so devout Episcopals who were new American citizens did not wish to associate the British Crown with their prayer book. I am a Presbyterian deacon, and this book helped me to realize how much other Protestant denominations owe to our Anglican forebearers, and why the various editions of the Book of Common Prayer were prepared. -- Robert H. Sydnor

Excellent History of the Anglican Book of Common Prayer

Published by Thriftbooks.com User , 23 years ago
This is the second edition of Reverend William Sydnor's history of the Book of Common Prayer. The author is a retired Episcopal priest who served for many years at the National Cathedral in Washington,D.C. The 156-page book is organized in 12 short chapters that read quickly. American Protestants of all denominations owe a substantial debt to the Anglican Church and, later, the American Episcopal Church for the rich spiritual heritage contained in the Book of Common Prayer. The Reverend William Sydnor guides the reader through the spiritual, political, and social changes in England and America that were the underlying reasons why new editions were needed for the Book of Common Prayer. Of particular interest to American readers will be Chapter 6, the first American Prayer Book of 1789. Since new American citizens did not want references to the British crown in their prayerbook, a new edition was needed. As a Presbyterian deacon, I came to appreciate our Anglican heritage of the Book of Common Prayer. It is recommended as a reference book for main-line Protestant denominations. Robert Hadley Sydnor
Trustpilot
Copyright © 2022 Thriftbooks.com Terms of Use | Privacy Policy | Do Not Sell or Share My Personal Information | Accessibility Statement
ThriftBooks® and the ThriftBooks® logo are registered trademarks of Thrift Books Global, LLC