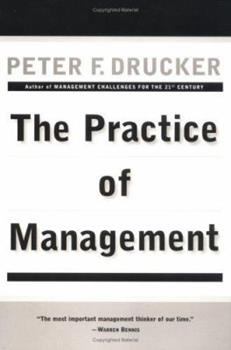 Practice of Management, The

One of the greatest management handbooks

Published by Thriftbooks.com User , 15 years ago
The late Peter F. Drucker is the most influential management thinker of the 20th Century. This book was first published in 1955 and consists of five parts plus a proper introduction and conclusion. Drucker, in the Preface, explains that the first aim of this book "is to narrow the gap between what can be done and what is being done, between the leaders in management and the average". The Introduction - The Nature of Management - consists of three chapters. Within the first chapter Drucker explains that "the manager is the dynamic, life-giving element in every business" and that management "is the organ of society specifically charged with making resources productive, that is, with the responsibility for organized economic advance." In the second chapter Drucker explains that "management is the least known and the least understood of our institutions" and discusses the three functions of management: managing a business, managing managers, and to manage workers and work. The third chapter states that management faces its first test of its competence and its hardest task in the then imminent industrial revolution called `automation'. Drucker does explain that automation is not `technical', but primarily a system of concepts, a concept of the organization of work. The first of six chapters within Part I - Managing a Business - uses the Sears, Roebuck & Company as an illustration of what business is and what managing it means. Based upon this illustration, Drucker concludes in Chapter 5 that "there is only one valid definition of business: to create a customer. ... It is the customer who determines what a business is." Chapter 6 introduces Drucker's most famous question: "What is our business - and what should it be?" This does look relatively simple, but it is not simple to answer and the author provides guidance. In the next chapter the objectives of a business are discussed: "Objectives are needed in every area where performance and results directly and vitally affect the survival and prosperity of the business." Chapter 8 discusses the tools that management needs to take make decisions today for the result of tomorrow. But no matter how sound the business economics, how careful the analysis, how good the tools, managing a business always comes back to the human element. This is the subject of Chapter 9, which deals with the principles of production. The first of the six chapters within Part II - Managing Managers - uses automobile company Ford to explain that the "fundamental problem or order, structure, motivation and leadership in the business enterprise have to be solved in the managing of managers." But he also warns that managers are its scarcest resource. Drucker also introduces the major requirements of managing managers, which are detailed in the next five chapters. The first of the three chapters within Part III - The Structure of Management - discusses the issue of organization structure. The next chapter is concerned with building

Published by Thriftbooks.com User , 17 years ago
What can I say about Peter Drucker that hasn't already been said. Written in 1954 it is as relevant to today's world (perhaps even more so) as it was back then. Fundamentally what strikes me about the Practice of Management is that it advocates a profoundly ethical view of management and the responsibilities of management. If you walk away with a just a few of the ideas he presents, you will be a better manager: 1) Management by objectives 2) The imporance of having the right "spirit" in an organisation. 3) The need for managers to feel empowered and have all the authority they need to carry out their job. 4) Appropriate rewards for strong performance and the need for censure when performance is weak. 5) Creating an open culture where mistakes are expected and form a basis for future knowledge. I could go on. As a final note, Peter Drucker foresaw one of the most remarkable changes in industry - a change that allowed the movement from vertically integrated industries to a distributed supply chain model - and that strong managers would be needed to deal with it. I would rate this as one of the best buys I have made this year.

The Most original work on management ever written

Published by Thriftbooks.com User , 22 years ago
Peter Drucker needs no introduction. His works have shaped the management thought and philosophy for the last half a century. What he discusses in this volume, other management thinkers will find only 40 years later. A must read for understanding- What management and business is all about.

The PRACTICE, not THEORY, of Managment

Published by Thriftbooks.com User , 23 years ago
Peter Drucker wrote this book at the height of the mis-application of statistics and "science" in areas such as management and economics. Drucker, who had the benefit of experience, saw the flaws decades before the rest of us. I suspect that the reason Drucker was so ahead of his time is that he was able to tap the experience of the great industrialists who probably were unwilling to share the trade secrets of their management knowledge with the general public. It wasn't until the 1980s when the masses began to learn these things.The book is a classic and is just as valid today as it was in the mid 20th century (why wouldn't it be?).Drucker explains within the book the reason for the word "practice" rather than "theory" of managment.

Published by Thriftbooks.com User , 23 years ago
I feel quite stupid when I read the book written in 1954! and noticed that most of the things that today are explained and developed in management books, have already been stated 30 years ago. Not only the author gives the clues to understand the present management techniques but he shows how should be used and why. DO not expend more money in new management books until you haven't read that first
Copyright © 2020 Thriftbooks.com Terms of Use | Privacy Policy | Do Not Sell My Personal Information | Accessibility Statement
ThriftBooks® and the ThriftBooks® logo are registered trademarks of Thrift Books Global, LLC