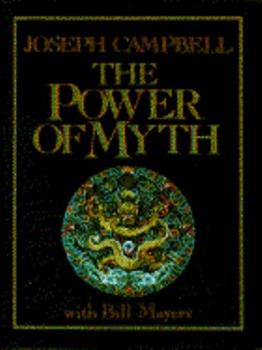 The Power of Myth

(Part of the Joseph Campbell and Power of Myth Series)

Finally available in a popularly priced, non-illustrated, smaller-format edition, which is ideal for the college market and general reader alike, this extraordinary best-seller is a brilliant evocation of the noted scholar's teachings on mythology.

This must be my third copy

Published by Gabi , 1 year ago
Once we become enthralled by myths we begin to understand that our story is humanity’s story, that this had happened before and will happen again. We must all forge our path in our hero’s journey, like those who came before and those who will come after. This book is a must for everyone, so much so that I always end up gifting my copy and getting another one. The copy (very good condition) I received was better than described, near mint. Very happy with the purchase.

The essence of human beliefs

Published by Thriftbooks.com User , 21 years ago
I first came in contact with Joseph Campbell's "The Power of Myth" while taking a Mythological Backgrounds class in college. I also have had the chance to view, in several opportunities, the video series in which Bill Moyers interviews Joseph Campbell (the full transcript of the video interview is contained within this book). In the "Power of Myth" Joseph Campbell addresses the very essence of human beliefs and the need for people to identify themselves with an entity or entities (depending on the culture) that will act as a vehicle to fulfill their innermost spiritual needs. Throughout the book the reader will witness a development; a change in the tone, mood, and objective of the interview. What begins as a dicotomy of schools of thoughts (based upon the manner in which the interview begins) gradually evolves into a series of discoveries that culminate with the realization that human beings cross-culturally possess very similar beliefs, if not the same. Within the pages of this book you will find Joseph Campbell's contemporary and candid approach to the portrayal of beliefs, religion, and spiritually. Campbell uses methaphors sucha as "... our beliefs constitute the software that allows our hardware to function ... [sic]." Campbell enables the reader to travel into the realm of the inner self, identifying and explaining the conceptual ideas that we are often inspired to talk about when we come face to face with something majestic (which generally occurs when we are away from the hassle of our daily routines), in practical terms. If you read this book you will be undoubtedly touched not only by the depth of Joseph Campbell's knowledge but also by the manner in which he delivers his knowledge to the reader, and to Bill Moyers. This is the type of book that will truly take you full circle to place you face to face with your true inner self.

Published by Thriftbooks.com User , 21 years ago
The right word to describe this 287-page dialogue between Bill Moyers and Joseph Campbell is "powerful." Although it may not have the depth of HERO WITH A THOUSAND FACES, this book is nonetheless engaging. These 1985 to 1986 interviews cover a lot of ground, as Campbell contemplates subjects including the inner journey, ancient myths, sacrifice and bliss, the hero's adventure, and love and marriage. Along the way, readers will find words to live by: feel the rapture of being alive (pp. 4-5); face life's trials, and find new possibilities in the adventure of being alive (p. 49); and follow your bliss (p. 156), for example. "Sit in a room and read--and read and read," Campbell says. "And read the right books by the right people. Your mind is brought onto that level, and you have a nice, mild, slow-burning rapture all the time" (p. 122). This book will surely appeal to thinkers, dreamers, artists, or anyone who appreciates stimulating conversation about what it means to be fully alive. G. Merritt

This book has no meaning...but it gives meaning to you.

Published by Thriftbooks.com User , 23 years ago
I had listened to Joseph Campbell on audiocassette six months earlier (Transformations of the Myth Through Time: Mystery of the East), in which I went for a long drive for about 5 hours and literally did not want to stop driving! However, I found myself in the same place (not behind the wheel, however) in reading The Power of Myth, as I could not put that down either. All I can say is, read it and if you don't like it, you'll be none the worse. It starts out showing how dreadful life can be in the latter half of the 20th century, but by the book's end, you have new hope and enlightenment towards the world, and hopefully changed a little inwardly. I've read it 3 times already and I should finally buy a copy of it...
Trustpilot
Copyright © 2022 Thriftbooks.com Terms of Use | Privacy Policy | Do Not Sell My Personal Information | Cookie Preferences | Accessibility Statement
ThriftBooks® and the ThriftBooks® logo are registered trademarks of Thrift Books Global, LLC