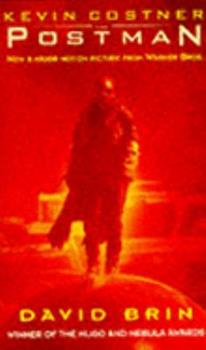 This description may be from another edition of this product. NOW A MAJOR MOTION PICTURE - "A moving experience . . . a powerful cautionary tale."--Whitley Strieber He was a survivor--a wanderer who traded tales for food and shelter in the dark and savage...

Published by Flannel-Moose , 2 years ago
I wasn't sure how I was going to like this book but I was pleasantly surprised. It's not as action packed as some post apocalyptic novels can be but it still managed to keep me on the edge of my seat. The main character easily relatable and just overall nice to go on this adventure with.

Published by Thriftbooks.com User , 18 years ago
Having not seen the movie, I was not sure to expect. It is a very well written book and keeps your interest from beginning to end.SMOOTH WRITING CONTRUCTS THE WORLD:This being my second David Brin book, my first was Kiln People, I amazed at his writing. As a sci-fi buff so often the description of the "world" the novel takes place in is cumbersome. There are explanations of the situation, technology and social structure that weigh down most sci-fi stories. David Brin has a wonderful way of weaving this into his stories so they are part of the dialogue or the unfolding scene. Trust me, this makes reading his books effortless. I found this to be true in Kiln people as well.A TALE OF A DRIFTER:The story takes place after society is recovering from a major war and social upheaval. Gordon the main character is a drifter moving West to find a better place to live. He is a older survivor, so he knows of the times before the big war and society fell apart. He is accosted by some locals in his travels and while planning to retrieve some of his belongings happens upon an old mail truck. Here he realizes that the world fell apart a bit differently than he supposed and in acquiring the wardrobe of the hapless dead postman, he has taken on the mantle of that title. HOW HOPE CAN BE GROWN:The rest of the story is how Gordon continues his travels from town to town and the saga of the postman is begun. Some of it is driven by its own momentum. Some of it is driven by Gordon's imagination. Mostly it is interesting how a theory can help hope form and become self perpetuating. Here the Postman becomes the icon of a world that is gone. Maybe just maybe, it can be rebuilt.IT IS ALL SO PLAUSIBLE:Ironically, when you read of how the world fell, you can see where we have this potential. It is all so plausible. We have the elements in today's society to create this very same mess. David Brin does a nice job working from that and from the hopes that could rebuild that.

Thankfully not the movie

Published by Thriftbooks.com User , 20 years ago
Actually I can't attest to having seen said movie, but a cursory reading of the plot of the movie shows that they seemed to have played a bit fast and loose with this book, which considering the reviews it got, probably wasn't a good thing. Oh well. To each his own, you're never going to get an exact translation. At least they're restored the brilliant reissue cover, much as one can admire Kevin Costner as an actor, I would have preferred not to have his bedraggled face staring at me every time I go to pick the book up. That all stated, this is a highly entertaining and fairly straightforward book, probably not as deep as Brin would like it to be, but a good try nonetheless. We have a future US destroyed by war, with scattered towns basically living their own separate existences, while an army run by survivalists inspired by a Hitleresque fanatic are trying to take over everything in sight. Our hero enters this mess while trying to escape some roving raiders and finds a postal uniform and some mail . . . from there he concocts a lie to help him get food and stuff but winds up inspiring everyone and restoring hope to a faded nation, regaining his own lost ideals in the process. Needless to say there's plenty to like in this book, Brin's envisioning of a future US with everyone living in the shadow of the past war is great, the story moves at a quick pace, so even when it's not that engrossing you're still reading, and the situations are varied, with a fairly uplifting message that manages to come across as sincere. However, most of the stuff you can see coming from miles away so don't expect "shocks on every page", with the exception of maybe the main character and some others, most of the people populating the book are a tad one dimensional, sure there's lot of them but very few of them feel "real". Brin appears to be shooting for the same status that Earth Abides (a really great novel, by the way), Alas, Babylon and maybe even On the Beach have garnered over the years but he defeats himself by making it too science fictional, what worked in those books was a palpable sense of reality, that this stuff could happen tomorrow, Brin's got too many talking computers, augmented humans and fancy future stuff to give the reader a true connection with his future. So in the end what you wind up with may not be an enduring classic beloved by millions but merely an extremely entertaining and diverting SF novel. Which, all told, may be enough.

Published by Thriftbooks.com User , 20 years ago
I have never before read a David Brin novel, others here say this is not his best, but I found this novel a very good read. This book begins approximately sixteen years after an NBC war (for those who don't know, that stands for nuclear, biological, chemical) that was called the doomwar by those who lived through it. That war nearly destroyed the United States as a civilized society, but soon after that war survivalists plundered and destroyed most of what little civilization remained. Gordon, the primary character, traveled from one small isolated village to another for sixteen years after the Doomwar and at one point was robbed of most of his meager possessions. Soon he found a United States Postman's uniform and badge, and from there he impersonated a postman from a long dead government, a scam that had unusual consequences to say the least and created a very interesting story, with danger all around. This novel is fast paced and always the human nature side of the story is not neglected, and womens' view of things is well discussed, and as David Brin seems to say in this novel, how can us guys really know what a women thinks, down deep, all the time? This book is rich in descriptive detail without overdoing it. I found this book very easy to read, the words seemed to flow off the pages, well written.

Published by Thriftbooks.com User , 23 years ago
I was hesistant in buying this book due to my unfavorable impressions to the horrible trailers that I saw for the movie, The Postman. The story intrigued me, but I had passed over the book 4 different times in various bookstores. Well finally on my 5th lookover, I decided to buy it and I'm sure happy I did. I took it home and read the book in two sittings. Couldn't get enough of the book and was sad to see it end.It was a fast read, and I liked the fast plotting of the book. I wanted to see how each new town that Gordon, the "Postman", traveled to would react to him. Great read.Although labeled as a Sci Fi book, I tend to see some Western aspects of the books. There aren't cities anymore, but towns. Plus Gordon is traveling in the wilderness like a frontiersman, trying to rediscover the west. I find the western sci-fi/fantasy genre to be a very unexplored genre. Some books I recommend would be Devil's Tower, and Devil's Engine by Mark Sumner. A nice mix of traditional western with Fantasy. Brin, I sure hope you write a sequel. Gordon still has more of the west to explore!

Taking Stock of Our Responsibility For Law

Published by Thriftbooks.com User , 23 years ago
At one point in David Brin's "The Postman," the narrator intones: "Gordon's appointed postmasters would continue lying without knowing it, using the tale of a restored nation to bind the land together, until the fable wasn't needed anymore. Or until, by believing it, people made it come true." There is more than a touch of William James here, of making it so by believing in it, of the "Will to Believe." Certainly, Kevin Costner's movie version demanded a heavy dose of the willing suspension of disbelief from us when an army of postmen rode to the rescue under a restored "Old Glory," forming an unwitting parody of "cavalry to the rescue" scene in old westerns, as well as of an earlier Costner epic ... the mounted ride-by presented as holy defiance in both The Postman and Dances With Wolves. Because Brin was crafting a book, and not painting visual symbols, his demands seem more reasonable. Despite some stretches, and unlike other reviewers, I did not see the mano-a-mano at the end as "deus ex machina," but instead a reasonable question -- are we as capable of creating one kind of "superman" as that other, most feared? The fight woven into the endstory is, after all, symbolic of a struggle between Titans (an image and a term Brin consciously employs): competing world views. If we are prepared by science fiction to accept the evil member of the "superman" twins, why not also the good? Is science fiction so jaded, or will it accept the myth of the good in people as quickly as the myth of evil? By using the Postman as the handy symbol for "swell the music, pass around the Kleenex" scenes, Costner buries the underlying irony. The Postman as epic hero.... Brin demands that we attempt, and then understand that it is, faith in such simple images of normalcy, justice and peace that make it so. As his apocolyptic tale has it: "More people died due to the breakdown and lawlessness -- the shatt! ered web of commerce and mutual assistance -- than from all the bombs and germs, or even from the three-year dusk." It is belief that must re-weave the web, not brute power. Brin's demand, the demand he lays equally at the feet of the idealist, the pragmatist and the intellectual, is more fundamental than the "willing suspension of disbelief" with which we watch TV reruns. We do not allow the show to end, but make it real by our belief that it is. This demand is at the core of a basic rift in philosophies of law which both book and movie drive home. To Costner's credit in an otherwise overwrought and manipulative movie, he did not lose sight of that demand. The Holness and survivalists, in both Brin's work and Costner's, are embodiments of a conception of law as a one-sided exertion of power. Brin comes close to quoting the power-oriented political philosophy of Thomas Hobbes' classic "Leviathan" when he describes the life of women in the new order as "poor, painful and short." Against this philosophy is one that grounds law and or
Copyright © 2020 Thriftbooks.com Terms of Use | Privacy Policy | Do Not Sell My Personal Information | Accessibility Statement
ThriftBooks® and the ThriftBooks® logo are registered trademarks of Thrift Books Global, LLC