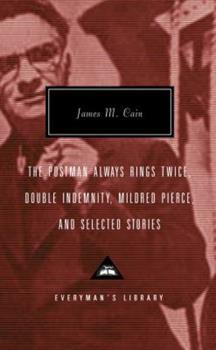 These three classics from the master of the noir novel, along with five otherwise unavailable short stories, are electric with the taut narrative voice, the suspense, and the explosive violence and eroticism that were James M. Cain's indelible hallmarks. The Postman Always Rings Twice , Cain's first novel-the subject of an obscenity trial in Boston, the inspiration for Camus's The Stranger -is the fever-pitched tale of a drifter who stumbles into...

for lovers of the hard boiled

Published by Thriftbooks.com User , 13 years ago
If you love thrillers and hard boiled fiction, these novels from the 1930's are still great - well-written and interesting! If you are a film noir buff, you will enjoy reading the source of some of the most important films in this genre.

A Pioneer of American Noir

Published by Thriftbooks.com User , 13 years ago
James M Cain (1892 -1977) is best remembered for a series of novels he wrote while working as a screenwriter in Hollywood during the 1930s, including "The Postman Always Rings Twice", "Double Indemnity" and "Mildred Pierce". These novels were highly popular in their day and were made into several classic movies. Sometimes denigrated as "pulp" or even as "trash", these novels offer their own vision of American life and make a substantial contribution to American literature. The three novels, together with five rare Cain short stories, are available at a modest price in this hardback edition from Everyman's Library. The volume also includes an introductory essay on Cain by Robert Polito together with a chronology of Cain's life and work. The novels are set in the Depression-era 1930s in southern California, including Los Angeles and its environs. There is feeling of place in each of these novels, particularly of cheap seedy businesses, impoverished dwellings, lonely roads and railroad tracks, poolhalls, and chop houses. The novels offer a stark view of human sexuality and lust and a dismal view of human nature as motivated by greed, jealousy, and class envy. Cain portrays a society that is philistine and always on the make. Women tend to be the stronger characters in Cain's novels. They take the initiative with their men, most often by usuing their sexuality but sometimes through ambition and effort as well. The men tend to be shiftless, unfocused and driven by their passions. Cain's writing is tough, descriptive, colloquial, and short. The two short works in this collection, "The Postman Always Rings Twice" and "Double Indemnity" are stories of murder and violence. Both are told in a confessional style by a male narrator who is about to receive his end for his misdeeds. This style gives the books a strong sense of immediacy. "Postman" is set in suburban Los Angeles among the poor. Its primary character is a 24 year old grifter who becomes involved with the wife of a small owner of a restaurant and plots with her to kill him. The man is referred to by the characters as "The Greek" and their are overtones of prejudice throughout the work. The sexual character of the work was raw and overwhelming in its day, and it remains potent. The illicit affair is described in great detail with strong overtones of masochism on behalf of the woman. The novel details the murder plots, the streets of Los Angeles, and the criminal justice system of the day. It ends with an ironic but fated twist. "Double Indemnity" also involves a scheme by a woman and her lover to murder the husband. In this case, the motive is more greed -- for the proceeds of an expensive insurance policy -- than lust. The narrator is an insurance salesman who becomes infatuated with the wife of an executive of an oil company. Thus, the story takes place among the middle and upper middle classes rather than among the poor; and, as was "Postman" it is narrated by the primary male characte

Published by Thriftbooks.com User , 15 years ago
If you haven't read James M Cain yet, you have to check him out. This Everyman's Library edition is a great introduction. You get a lot of story in a tidy little hardback. Good paper, readable print, a volume that practically begs to be held and a nice wee ribbon for a bookmark. And the price is right, too. Cain's prose is lean, tight and wickedly sharp. Like a back-alley razor-fight, you don't even feel the cut until after you see the blood. By then, it's too late. Movies have been made of Cain's work. Quite a few, actually. He's stayed in print in Europe for the last fifty years. His work has cast a long shadow over many of our most popular noir authors today. Way too good to miss.

Published by Thriftbooks.com User , 15 years ago
I haven't been able to put this down since it arrived two days ago. I had read some of James Cain's stories a long time ago, but in my opinion he is the best detective writer of all. The movies don't follow his stories in all cases, but they are still wonderful to read. A great collection!
Trustpilot
Copyright © 2022 Thriftbooks.com Terms of Use | Privacy Policy | Do Not Sell My Personal Information | Cookie Preferences | Accessibility Statement
ThriftBooks® and the ThriftBooks® logo are registered trademarks of Thrift Books Global, LLC