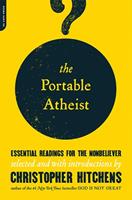 The Portable Atheist: Essential Readings for the Nonbeliever

Christopher Hitchens's personally curated New York Times bestselling anthology of the most influential and important writings on atheism, including original pieces by Salman Rushdie and Ian McEwanFrom the #1 New York Times best-selling author of God Is Not Great, a provocative and entertaining guided tour of atheist and agnostic thought through the ages--with never-before-published pieces by Salman Rushdie, Ian McEwan, and Ayaan Hirsi Ali.Christopher...

A Great Collection About a Major Problem - Religion!

Published by Thriftbooks.com User , 15 years ago
Hitchens prefaces his book by telling us that the prehistory of our species is ridden with episodes of nightmarish ignorance and calamity, for which religion is used to identify not just the wrong explanation but the wrong culprit as well. The few men of science and reason and medicine had all they could do to keep their libraries and laboratories intact, or their very lives safe from harm. Today's typical "justification" for religion involves charitable or humanitarian work - obviously this says nothing about the veracity of the belief systems involved. All religions must, at their core, look forward to the end of this world; atheists, on the other hand argue that this world is all we have and that it is our duty to make the most of it. It is one thing, per Hitchens, to believe that the magnificence of the natural order strongly implies an ordering force; quite another to say this creative force cares for our human affairs, and it is interested in with whom we have sex and how, as well as the outcome of battles and wars (and even athletic contests). Even accepting Jesus' birth, it still does not prove he was more than one among many shamans and magicians of the day. Einstein took the view that the miracle is that there are no miracles. Everybody is an atheist in saying that there is a god in which he does not believe - atheists simply go one step further and add another god to not believe in. Sadly, there are the seemingly endless wars and persecutions that go on in the name of religion. It is almost comical that as the Iranians pursue the imminent return of the Twelfth Imam and reinforce their apocalyptic talk by acquiring doomsday weaponry, Jewish settlers hope, by stealing the land of others in accordance with biblical directions, to bring Armageddon in their own way, while their chief backers (American evangelical fundamentalists) are simultaneously trying to teach pseudo-science, criminalize homosexuality, forbid stem-cell research, and display Mosaic law in courtrooms. At the same time, the Pope maintains that condoms are worse than AIDS. The bulk of "The Portable Atheist" consists of readings from mostly eminent minds, going back to the early Greeks. My favorites were Elizabeth Anderson, Bertrand Russell, and Ayaan Hirsi Ali. Summarizing, the biggest take-aways of this book were to show how tenuous the belief in religion is, the almost laughable inconsistencies involve, how it has blocked progress through the ages, and the almost unlimited misery it has brought to mankind - throughout the ages.

Published by Thriftbooks.com User , 15 years ago
I was a tad bit skeptical about purchasing this product, but now that I have read a big portion of it, it really is a great collection. While yes many of the articles and excerpts can be easily found for free on the internet, the convenience of it all in one place, plus the lesser know authors AND the extremely good introduction by Hitchens makes this a product worth purchasing.

The best anthology of atheism I've come across

Published by Thriftbooks.com User , 15 years ago
The Portable Atheist, edited by Christopher Hitchens, is a great selection of how atheism has transformed into what it is today. Hitchens' introduction itself is an astounding tour de force that should not be skipped. In his introduction alone, Hitchen's lays out the foundation and positive attributes of atheism. This is crucial as many people have the common misunderstanding that atheists are pessimists or discontented. He also makes the genuinely important point that in order to believe in one of the three major monotheisms, you have to believe that the heavens watched our species for at least one hundred and fifty thousand years with "indifference, and then- and only in the last six thousand years at the very least - decided that it was time to intervene as well as redeem." He concedes that it is preposterous to believe such a heinous thing - for it would be cruel if true. His introduction is intelligent, convincing and witty - and it doesn't stop there. The selections in this book show the evolution of atheism (or at least nontheism) from early critics of religion such as: Benedict De Spinoza, Thomas Hobbes and David Hume to more of a middle stage (Darwin, George Eliot, Mark Twain and Bertrand Russell) and then to modern-day critics like: Richard Dawkins, Sam Harris, Steven Weinberg, Daniel Dennett, Carl Sagan, Victor Stenger, Ayaan Hirsi Ali, and many more. Another great thing is the book is helpfully arranged in chronological order. All beliefs aside, the selections in this book are powerfully argued and well written. I'd recommend it to anyone with a hunger for the truth and an open mind.

Published by Thriftbooks.com User , 15 years ago
The lengthy introduction will be familiar to those who have read other works by Hitchens and seen his lectures and debates. If you like the introduction, definitely get God Is Not Great. This introduction is basically a recitation of his arguments against religion and faith, with copious examples. I am not trying to belittle it - any believer who is unfamiliar with Hitchens should definitely read the introduction, and if they are surprised by what they read, should move on to God Is Not Great for more such historical examples that for whatever reason have not penetrated their protective outer coating. Following the introduction are 47 excellent selections with brief introductions by Hitchens, spanning two millennia (although there is a distinct gap of about 1500 years, the reasons for which should be obvious to all).
Trustpilot
Copyright © 2022 Thriftbooks.com Terms of Use | Privacy Policy | Do Not Sell My Personal Information | Cookie Preferences | Accessibility Statement
ThriftBooks® and the ThriftBooks® logo are registered trademarks of Thrift Books Global, LLC