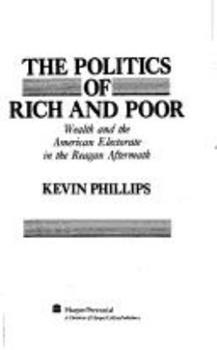 The Politics of Rich and Poor: Wealth and the American Electorate in the Reagan Aftermath

The enormous concentration of wealth in the United States during the 1980s--most of it in the hands of the top 1% of the population--will provoke what Phillips calls a watershed change in American... This description may be from another edition of this product.

Published by Thriftbooks.com User , 13 years ago
For those that want an anaylysis backed with statistics on the damage caused to the average american by Reagan era economic policies, and the IDEOLOGY that is at present is coming apart at the seems, then read this book. Phillips also mentions that the majority of the country was actually opposed to Reagans economic policies. Another great book to read is The United States:1980 to Present by Dean Baker. This book offers a very readable account of Reagan era policies, but lacks the depth of stats that Kevin Phillips gives us in his book. Dean Bakers book on the other hand is a joy to read in comparison with Politics of Rich and Poor which is often dry. Read Both though!

Published by Thriftbooks.com User , 14 years ago
Phillips wrote this book in 1990.This allows a reader to compare it with later books that dealt with the same problem ,such as " Boiling Point " in 1993 and " Arrogant Capital " in 1994.The first point that Phillips demonstrates overwhelmingly was that the Reagan tax cuts were primarily aimed at increasing the wealth and political power of the Wall Street speculators and investment banks like Bear Stearns,Merrill Lynch,Goldman Sachs, Morgan Stanley,Lehman Brothers,J.P. Morgan,Credit Suisse,Deutsche Bank,etc. This was possible because Reagan was not able to differentiate between Wall Street speculators ,on the one hand ,and entrepreneurship and enterprise ,on the other hand. For instance,ALL of the supply side economists(Laffer,Wannsiki,etc.)and most of the University of Chicago economists advising President Reagan were tied in to the Wall Street crowd ,either directly or indirectly.Phillips covers this in chapter 3.It is here that he makes two serious mistakes in less than one half of a sentence that costs him one-half of a star.He states :" Most of the conservative theorists acknowledged their restatement of Adam Smith..."(Phillips,1990,p.65).First,none of the supply siders or University of Chicago economists are conservative in the sense that Adam Smith was .They are Libertarians.This is a major confusion that is ubiquitous in America.Second,NONE of the policies recommended by these supply side and Chicago advisors follows from Smith.First ,Smith favored (a) an overall, progressive tax system,not a flat or proportional system (Smith,1776,Modern Library(Cannan) edition,p.794),(b)retaliatory and revenue tariffs(Smith,pp.434-439),and (c)direct government intervention into the economy through the provision of universal religious instruction and education,provided for free by the government to all individuals who could not afford to pay,in order to counteract the massive undepletable ,negative externalities/spillover effects arising from the workings of the Invisible Hand of the Market(self interest plus the specialization and division of labor[Smith,pp.716-768,pp.734-741);Phillips does better on p.69 in recognizing Smith's opposition to the interactions of monopolies and government and their negative impact on the political sphere of life.] A major plus of Phillips exposition is not only the massive statistical support that he presents in this book about the increasing inequality of income between different income classes but a very clear cut example that can be understood by any reader : " Under Reagan,as under Coolidge,the clear evidence is that the net tax burden on rich Americans as a percentage of their total income shrank substantially because of the sweeping tax cuts.The surge in actual tax payments was the result of higher upper-bracket incomes.To measure the benefits,imagine a businessman who had made $333,000 in salary,dividends and capital gains in 1980,and paid $120,000 in federal income taxes.As prosperity returned in 1983,his in

Published by Thriftbooks.com User , 19 years ago
The myths (or many of them)of the right are given full exposure in this fine book. Well researched and well written, it is a good primer on the delusions of the privledged class (just read some of the other reviews on this page).Over all a significant contribution to the new analysis of conservative revisionism.

Indispensible guide to the 1980's and beyond

Published by Thriftbooks.com User , 21 years ago
Phillips has documented in some detail the massive income shift of the Reagan years. In almost all categories the upper 10% of American families soared, while the remaining 90% either stagnated, or at the lower end, actually declined. The author's exhaustive charts demonstrate statistically what popular opinion could only entertain: the rich got richer and the poor got poorer. An interesting question to pose is why a Republican strategist like Phillips would document this adverse result in such unsparing fashion. Perhaps like some far-seeing conservatives he views a growing income gap as destabilizing to the country, and hopes to bring forth moderating influences.In any event, the book stands as an excellent reference for understanding the impact of those years. That Phillips does not delve beyond surface movements for deeper explanation is not an objection to the work as a whole. For what he succeeds in doing with considerable authority and as "one of their own", is to revive class bias as the focal point of American politics. Being a conservative, he is not about the business of endorsing class-struggle as a premise of human history or American politics. Nevertheless, his linking of the Reagan era to previous eras of capitalist overreach helps to revive the long submerged story of class-struggle in America. This is an indispensible book for understanding the 1980's and years beyond.

An accurate and detailed account of a socio-economic tragedy

Published by Thriftbooks.com User , 23 years ago
Kevin Phillips has all the credentials necessary to speak on this subject and for those who seem unaware of it; happens to be a republican. His detailed coherent account of what is, in the hands of most authors, a murky story - how the rich really got richer at the expense of the majority during the 80's - is fact filled, copiously notated, and hard to fault without resorting to a willfull ignorance to believe ideology over evidence. A must read book for anybody who got taken at that Three Card Monty table that was the american economy of the 80's
Trustpilot
Copyright © 2022 Thriftbooks.com Terms of Use | Privacy Policy | Do Not Sell or Share My Personal Information | Accessibility Statement
ThriftBooks® and the ThriftBooks® logo are registered trademarks of Thrift Books Global, LLC