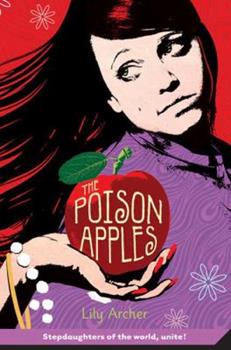 Three girls have something in common with their fairytale sisters--they are the stepdaughters of three very evil stepmothers. They think they are alone in their unhappiness until they arrive at a posh boarding school in Massachusetts, where they will plot their revenge. But first, they have to meet.

Published by Thriftbooks.com User , 14 years ago
Everyone knows the story of Snow White but have you ever heard of Molly Miller, Reena Paruchuri, or Alice Bingley-Beckerman? For one thing, their life is hardly a fairy-tale but everything is about to change. They just have to meet. The Poison Apples By: Lily Archer opens with the tale of how three delightful friends Molly, Reena, and Alice end up at an elite boarding school in Massachusetts. Each chapter revolves around a father's second marriage and a stepmother who turns out to be quite horrible. The pals form a club to get revenge on their wicked stepmothers but find out that not all wrongs make a right. This four star fictional novel is probably best suited for teenage girls who love to read about terrific friends who have to cope with major situations in their lives. The girls's loss of control over their own lives was very catastrophic. But their friendship went a long way to help when they were able to form their own little family with The Poison Apples. My favorite character was Reena Paruchuri because of her hilarious humor. (Archer, 20) "I hate yoga. I mean who wants to lie on the ground twisted up like a pretzel while some lady in velvet stirrup pants tells you to "relax"? And whenever I drive by a yoga studio (there are like ten billion here in Beverly Hills) and look through the windows there are crowds of skinny women is short-shorts, contouring themselves into freaky positions." Plus, Reena's stepmother Shanti Shruti is so insane and I think is truly bipolar. On page 112 Pradeep (Reena's brother) quotes, "So Shanti is adopting a penguin, but it needs, like, a really cold, like artic environment...so they're building and addition to the house, this, like, special terrarium or something with ice and water...and its costing Dad like a million dollars." I cannot in reality imagine someone wanting to buy a penguin out of the blue! I have to say that the book was a little confusing at times because each chapter focuses on one-girl and switches viewpoints at bit. The ending is truly magical when the girl's accept the saying "two wrongs don't make a right". Lily Archer's vastly engaging novel makes the reader want to scream out loud for a sequel to answer many unknown questions after reading. And who wouldn't after some romance, heartbreak, and plenty of laughter in The Poison Apples!

Published by Thriftbooks.com User , 14 years ago
Rarely have I thought this about a book: but this book needed to be longer. The first section (more than half of the book) is clever, witty, and a pleasure to read. The three main characters are distinct from one another (although all written in oddly the same voice), each situation is well-depicted, and I both laughed with and sympathized with them. However, once the three heroines have found one another and bonded over their wicked stepmothers, the book falters badly. In Part II, the three girls' romances are much too abrupt and undeveloped; their decision to seek revenge on their stepmothers is bumpy; and the actual execution of the revenge plots is just lame. The plots take each girl back home and away from all the others, which is a structural problem in the narrative; and each has only one chapter in which to 1) fail in her revenge; and 2) see that it wasn't a good idea in the first place. This needed a lot more thought. Still, a very promising first book. I look forward to reading more by this author.

Excellent! Inside the heads of three teenage girls...

Published by Thriftbooks.com User , 14 years ago
It's been a long time since I read something that so accurately recalls what it's like to be a teenage girl. Feeling out of place, growing up, taking on challenges, making friends - these are all themes explored in The Poison Apples. The book is a heartfelt story about three girls struggling to find themselves while they take their first steps outside the bosom of their once secure families. The girls eventually find each other and are able to rely on one another for support, as their families collapse around them. The book is wonderfully realistic, and each character is fully fleshed out and utterly believable. Like the best of teenage tales - I cringed and smiled as I read along, identifying with the protagonists. I look forward to future works from Ms. Archer.

Published by Thriftbooks.com User , 14 years ago
I wish this book had been on my shelf when I was fourteen -- we need more smart books about smart girls coping with adolescence. The book opens with the story of how each of three friends -- Molly, Reena and Alice -- ended up at a boarding school in Massachusetts. Each tale revolves around a father's second marriage, and a step-mother who turns out to be a raging terror. I might think the family dramas were overdrawn if I hadn't been personally witness to some equally terrible family collapses when my friends I were teenagers. The story of the girls' developing friendship and how they collectively cope with boarding school life and family travails remains engaging through the last page. I can't seem to shake my continuing interest in adolescent fiction, maybe because the genre played such an important role in my own growing up. The Poison Apples validates my habit of tracking new releases...

Published by Thriftbooks.com User , 14 years ago
This is the story of three girls who form a club to get revenge on their respective stepmothers. The girls are all from different places and have diverse backgrounds. My favorite character was Reena Paruchuri, a 15-year-old Indian girl whose father has left her mother to marry a 25-year-old yoga instructor. There's actually really interesting stuff in here about how Western culture has co-opted some aspects of South Asian culture. But mostly it's just a really fun, funny read, and although at first the stepmother seem like monsters, by the end of the book they, and everyone else in it, are humanized.
Trustpilot
Copyright © 2022 Thriftbooks.com Terms of Use | Privacy Policy | Do Not Sell My Personal Information | Accessibility Statement
ThriftBooks® and the ThriftBooks® logo are registered trademarks of Thrift Books Global, LLC