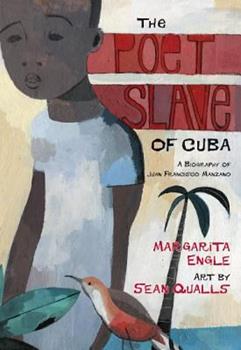 A lyrical biography of a Cuban slave who escaped to become a celebrated poet. Born into the household of a wealthy slave owner in Cuba in 1797, Juan Francisco Manzano spent his early years by the side of a woman who made him call her Mama, even though he had a mama of his own. Denied an education, young Juan still showed an exceptional talent for poetry. His verses reflect the beauty of his world, but they also expose its hideous cruelty. Powerful,...

Published by Thriftbooks.com User , 11 years ago
The Poet Slave of Cuba by Margarita Engle is a touching young adult novel that is written in verse. The story of the young poet slave is definitely not a happy one; but the ending will leave you feeling inspired to cherish the life you have. The novel is based on a true story about the life of Juan Francisco Manzano. Juan is a young man who was born into slavery in the late 1700's. He was blessed with a rare intelligence for the arts, especially for poetry. While young he could not read, but he could memorize beautiful sonnets, plays, verses and sermons with ease and then recite them with perfection. The upper class loved him, and his owners forced him to recite at parties all around, all the while treating him worse than the dirt they trod on. Although Juan had great parents who gave everything to have him free, all they gave was disregarded by the upper class and he was beat and tortured to the amusement of those that had money and power This book had a way of putting my life into prospective more than any other book that I have read. The book is written in many different voices. As the reader hops from character to character and their point of view about the young Juan and his gift, they will see a cruelty in this world unlike any other. Yet on the other hand they will see courage and an unyielding love within the family of this young man. The art in this book is great too. The expressions on the faces of the characters, and the symbols of death and sadness were explicitly shown by the illustrator. Anyone that enjoys literature about other cultures must read this book. Anyone that feels like they were dealt a tough lot in life should read this book. If you need help persevering trials in life, look to Juan as an example of faith and hope and read this book.

Published by Thriftbooks.com User , 12 years ago
At the same time that many African-Americans were suffering in slavery in the United States, countless Cubans were enduring a similar fate in their own country. Juan Francisco Manzano was born into a family of Cuban slaves in 1797. He served two mistresses (the second of whom was self-centered, cruel, and vindictive) until he escaped as a teenager. Even as a young boy, Juan possessed an amazing gift for remembering and reciting poetry, which propelled him into the performing spotlight under his first mistress Doña Beatriz. When his first mistress died and he became subject to the mentally unstable La Marquesa de Prado Ameno, his incredible talent for verse as well as his passion for life, learning, and self-expression became both a curse and an escape for Juan. He clung to the poems he had internalized as well as his own creations as he endured confinement and torturous abuse as a slave. Margarita Engle, winner of the Pura Belpré Award and the Junior Library Guild Selection Editor's Choice for The Poet Slave of Cuba, recounts the heartrending biography of Juan's childhood and teenage years as a slave. Respectfully echoing Juan Manzano's poetic voice by writing in verse herself, Engle chronicles Juan's story through multiple voices. Even with the conciseness that poetry demands, Margarita Engle captures the individual personalities of the various characters of this story--Juan, Maria del Pilar (Juan's mother), Toribio (Juan's father), Doña Beatriz (his first mistress), La Marquesa de Prado Ameno (his second mistress), Don Nicolas (La Marquesa's son), and the Overseer. Engle illuminates Juan's passion for knowledge, his quiet patience, as well as his ferocious tenacity. She underscores the icy, cruel selfishness of La Marquesa De Prado Ameno. Maria del Pilar's steadfast compassion spills out of the voice Engle pens for her. Even the Overseer's internal torment over being the instrument of torture for La Marquesa seeps through his limited lines. As a Cuban-American author with a background in botany and agronomy, Margarita Engle not only tells an inspirational story of suffering and survival, but she also grafts in glimpses of the island setting, the agriculture backdrop, and the cultural hierarchy of nineteenth century Cuba. Sean Qualls' intermittent illustrations in shades of black, grey, and white create an effective spotlight for scenes in Engle's verse. Although Engle describes Juan's cruel punishment, this book would be completely suitable for middle- or high school age students. In fact, Engle's book contains very little blood, gore, or overly-explicit material. It is the brutality, mercilessness, and inhumanity of the slaves' punishments that disturb the readers' unaccustomed minds. Engle's book does not gloss over the inhumane treatment of Cuban slaves in the 19th century, yet it provides a story of hope and transcending harsh realities.

Published by Thriftbooks.com User , 14 years ago
You learn about the life of this child and experience his triumph over adversity. The book makes you want to read the child's original words even though they are in Spanish.

Published by Thriftbooks.com User , 14 years ago
How would you feel if your former master, who had loved you and cared for you like you were her own child, had said that once she died, you and your family would be free. Happy, right? Well what if no one paid any attention and you were sold to another master who punishes you for crimes you didn't commit? That is the dilemma Juan Fransisco Manzano faces when his former owner, who took him to parties and had him wow her guest with his uncanny ability to recite poems and verses from the bible. At his baptism, Dona Beatriz, his former owner, declares that once she dies, he and his family will be free, for the price of 300 pesos, and any new-born babies will be born free. But once Dona Beatriz dies, Juan's family discovers they don't have enough money to buy Juan's freedom. So he is sold to La Marquesa De Prado Amendo, whose son, Don Nicolas, takes a liking to Juan, and befriends him. But La Marquesa frequently and brutally punishes Juan for sneaking peaks at her books. But she is grateful enough to let Juan watch her sons take art classes, and Don Nicholas gives Juan some parchment and a stub of crayon to draw with. Eventually, Don Nicholas helps give Juan the courage to run away, and Juan flees in search of his mother. In really enjoyed this book for three reasons: the poetry, the character development, and the Spanish vocabulary sprinkled into the text. The first reason I liked this book was in was written in free verse poetry form. This made the book very quick and easy to read, which made me like it more. It was also very unique, and was very well done. The second reason I liked this book was the character development, mainly Juan. He grows up a lot in the book, from age eleven to age sixteen. But he also develops, by not abiding to La Marquesa's rules or caring about the consequences. He also learns that he doesn't need to keep sneakily buying pen and paper using the money he receives at parties. He can just store all the knowledge in his head. And finally, I enjoyed the Spanish vocabulary sprinkled in. I take Spanish class on B days and found that the Spanish words were very useful. I also like how the author used in text definitions to explain to you what the word was. In conclusion, I thought this was a fabulous book and would recommend it to someone looking for either a book written in poetry of a book with Spanish sprinkled into the text. C. Davidson

Published by Thriftbooks.com User , 15 years ago
The verse novel is a tricky fickle thing. Though no one to the best of my knowledge has ever put down the rules that govern the creation of a verse novel, there are always a couple unwritten understandings. No verse novel should tell its tale through poetry when it would make more sense to tell it through prose. Also, just breaking up a bunch of sentences into lines doesn't mean you're writing poetry or anything. The ideal verse novel is one where it makes sense to write a story through poetry AND just happens to have an ear for beautiful language. Such is the case with Margaraita's, "The Poet Slave of Cuba". In the book it says that, "The life of Juan Francisco Manzano haunted her for years before she finally realized that to do justice to the Poet Slave's story, she needed to write it in verse". The result is an achingly beautiful and horrific story that deserves to be read by teens everywhere. Born a slave in Cuba in 1797, Juan Francisco Manzano grew up the toast of his owner Dona Beatriz. His ability to memorize speeches, plays, and words of all sorts made him a kind of sought over pet to the Spanish aristocracy. Though she promised to grant him his freedom when she died and she allowed both his parents to buy their freedom, Juan Francisco remained a slave after Dona Beatriz's death and was handed over to the dangerously psychotic Marquesa de Prado Ameno. The Marquesa resents Juan from the moment he is put into her possession and every attempt he makes at reading or writing is put down with shocking violence. A biography told in poems, this book shows the worst of slavery's cruelties and the sheer will it takes to not only survive under such conditions but escape. The text in the book alternates between different points of view on almost every page. In a sense, the villains have just as much of a say as the heroes. Juan, for his part, sometimes will have three pages in a row of thoughts, each with its own separate poem. Alongside this format are illustrations by Sean Qualls. Qualls has a style that usually doesn't do much for me. In this case, however, he's the perfect complement to Engle's tale. The white aristocracy with their blank eyes and sharp pointed teeth are positively horrific. These images magnify the storyline. Here, for example, are two ladders that lead suggestively against a wall. Now a shiny coin. Now a butterfly. They are rough unfinished drawings that show far better Juan's situation than any polished colored print could ever convey. At first I was a little perturbed that for all the book's poetry and loveliness, I couldn't find any actual poetry by the real Juan Francisco Manzano. Then I reached the end of the title and in the back found that author Margarita Engle not only offers us a biography of the true Juan Francisco, but reprints his bibliographic details as well. Now, there is a debate surrounding this book. It is not a debate that questions whether the story is told well or whether o
Copyright © 2020 Thriftbooks.com Terms of Use | Privacy Policy | Do Not Sell My Personal Information | Accessibility Statement
ThriftBooks® and the ThriftBooks® logo are registered trademarks of Thrift Books Global, LLC