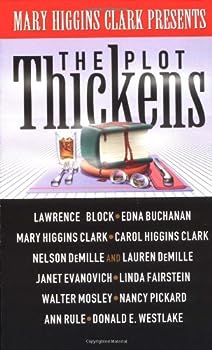 (Part of the Fearless Jones Series)

Joining together for a good cause brings out the best in today's top mystery and suspense writers For this marvelously entertaining anthology, these outstanding contributors rose to a unique literary... This description may be from another edition of this product.

Published by Thriftbooks.com User , 15 years ago
This book is great exposure to writers I would not ordinarily read. I bought because I am a HUGE MHC fan. Great read, quick and easy.

Published by Thriftbooks.com User , 15 years ago
This series of shorts is lots of fun. As you read through, you can't help but look for the "Thick fog, thick steak, and thick book" that are present in different forms in all of the stories.

Published by Thriftbooks.com User , 19 years ago
With most short story collections, there's usually a common theme. In "The Plot Thickens," each author was required to incorporate the following three things into their story: a thick fog, a thick steak, and a thick book. Most are concealed cleverly and seamlessly in the story, but I still found myself looking for them like it was a Where's Waldo? game. Not surprisingly, most of the authors use a restaurant setting to integrate the steak, but at least Westlake does a little play on of words in his story.Anyway, on to the following 11 short stories:"How Far It Could Go" by Lawrence Block is a largely conversational story set in a restaurant, where a woman meets with a man she intends on hiring to "rough up" her ex-boyfriend over a cash settlement. I kept expecting some great twist at the end (never happened); still, not a bad story. >> "Foolproof" by Edna Buchanan -- An Egyptian mummy autopsy reveals a 1000+ year-old murder victim with the same fingerprints as a notorious gang member. Again, the ending didn't impress me, and the story seemed to jump unevenly from scene to scene. >> "The Man Next Door" by Mary Higgins Clark -- A woman's creepy next-door neighbor breaks into her house through their shared basement wall (quite ingenious, in my opinion), in order for him to abduct her and keep her a prisoner in his home. Mary, being the brains behind this whole eradicate-American-illiterarcy thing (which this book donates a percentage to), not surprisingly has the longest "short" story in here, at approximately 40 pages, but it doesn't feel that long. It has an engrossing plot, and good characterization and alternating p.o.v. One of my faves in here.<p>"Too Many Cooks" by Carol Higgins Clark -- An aspiring actress is called in to play the role of a chef in a commercial, but accidents start occurring on the set. A little predictable about the bad guy, but still good. >> "Revenge & Rebellion" by Nelson & Lauren DeMille -- A woman meets with an old college friend who's now a literary agent, in the hopes he'll accept her manuscript. Another restaurant setting; in fact, two restaurants in this one. Good story, but the suspense twist doesn't happen until the last page. >> "The Last Peep" by Janet Evanovich -- A bounty hunter and her partner-in-training search for the missing body of a Peeping Tom. Strong, unique characters. Quite funny. >> "Going Under" by Linda Fairstein -- A policewoman agrees to go undercover as a dental patient in order to catch a molesting dentist. Reading this one made me glad I never chose to go under while at the dentist's--just to be safe.<p>"Thick-Headed" by Walter Mosley -- Two men find a dead body in the trunk of a car and get involved in solving the crime. A little confusing, probably because there were so many characters--dead and alive. >> "Love's Cottage" by Nancy Pickard was told in letter form and based on an actual mass murder in 1914. Short, good ending; however, since no motive was ever given in history, it's up to

Published by Thriftbooks.com User , 20 years ago
"The Plot Thickens" is an anthology containing eleven stories from eleven of today's top mystery and suspense writers. To be honest, I hunted this book down solely for Janet Evanovich's Stephanie Plum short story, but found I enjoyed the whole thing. "The Plot Thickens" was written for a great cause, to raise money to fight illiteracy in the U.S., so you can feel good about where your money is going. Some of the stories are better than others and individual opinions will undoubtedly vary, but each tale includes a thick fog, a thick book, and a thick steak, and it's fun seeing how each author chose to work in those three elements.1. "How Far it Could Go" by Lawrence Block is probably my least favourite story of the anthology. A man and a woman meet in a restaurant to discuss using violence to dissuade the woman's ex-husband from suing her, but how far will it go? Thin on plot, but Block creates an interesting mood. **1/22. "Foolproof" by Edna Buchanan tells the tale of an ancient Egyptian mummy autopsied and fingerprinted for interests' sake. But the findings bring to light a millennia's old unsolved murder and cast doubt on the only foolproof form of crime scene evidence. An intriguing and enjoyable story. ****3. "The Man Next Door" by Mary Higgins Clark is a great, suspenseful story. When a young woman becomes the latest unwilling houseguest of her serial killer neighbour, the race is on to find her before it's too late. A well-written and exciting tale. *****4. "Too Many Cooks" by Carol Higgins Clark introduces a struggling young actress who gets a break when she's chosen to play a cook in a steak sauce commercial. But she soon finds herself caught up in some real life drama and betrayal. A fun and entertaining story. ****5. "Revenge and Rebellion" by Nelson & Lauren DeMille is a deliciously twisted tale. When a woman gives her treasured autobiographical manuscript to her good friend who works as a literary agent, he gets a disturbing glimpse of the world through her eyes. But the aspiring author doesn't take criticism lightly, and lost in her own delusions, there's no telling what she'll do. A very good story. ****6. "The Last Peep" by Janet Evanovich is a Stephanie Plum story well worth tracking down. This time, bounty hunter Stephanie is on the trail of a burg resident with a penchant for peeping in windows and showing off his personal wares. But when she discovers his dead, naked body, which subsequently disappears, she's thrust into the middle of an exciting, and very amusing, mystery. A mystery that she is bound and determined to solve, with a little help from sidekick Lula and Grandma Mazur. A hilarious, well-written, and wonderful story. *****7. "Going Under" by Linda Fairstein is a fun and original tale. An ambitious young police officer gets her big chance to make detective, as long as she's willing to let a dentist with wandering hands have his way with her once he puts her under! I really liked this story. ****

as enjoyable as a juicy,"thick" steak!

Published by Thriftbooks.com User , 24 years ago
I don't normally like short stories,but here I found as much suspence and laughs as in any "thick" thriller book.Almost all of the stories were good,real "thrillers" (especially the one before last,"A road trip"),and I enjoyed seeing how each author fit the 3 "must" elements(a thick fog,a thick steak and a thick book) in his or her story. Also,I liked the fact that all the money derived from the selling of the book would go to an association which fights illiteracy in America.
Trustpilot
Copyright © 2022 Thriftbooks.com Terms of Use | Privacy Policy | Do Not Sell My Personal Information | Cookie Preferences | Accessibility Statement
ThriftBooks® and the ThriftBooks® logo are registered trademarks of Thrift Books Global, LLC