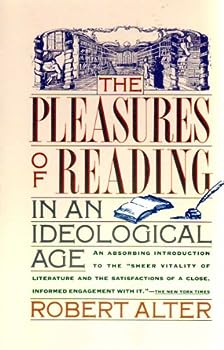 The Pleasures of Reading in an Ideological Age

This description may be from another edition of this product. A distinguished critic rescues literature from the ivory tower and reestablishes reading as a personal source of complex pleasure and insight.

Salubrious for those who do understand.

Published by Thriftbooks.com User , 15 years ago
There has been a series of theoretical "culture wars" in the academy in the past quarter century, and these have taken their toll on the actual practice of reading literature qua literature, and not merely as the expression of some oppressive ideology, or simply the deplorable detritus left behind by dead European males. Academics have been so busy saying "18th century British imperialism is evil and it must stop now!" that they have not bothered to remember what a chiasmus is, what "structure" means, how allusion works, even what literary language itself is. Alter's book is a largely eirenic effort to redress these deficiencies by helping readers, both scholarly and lay, to relearn the techniques---sophisticated intellectual techniques, not easy cookie-cutter formulae---necessary to read literature with genuine appreciation and understanding. Literature is an almost inexhaustibly complex phenomenon and its comprehension requires the acquisition of accordingly complex skills. These skills, foreign to most modern students and difficult in themselves (far more difficult than a happy game of "spot the patriarchy") cannot be set forth by any author, no matter how gifted a prose stylist, in terms fit for a dunce. Jesus said that the poor will always be with us. I would add that the stupid, too, will always be with us. And also that American culture does little to nurture the intelligent OR the stupid. No child left behind tends to mean every child left behind. It is a policy that panders to the lowest common denominator. It does not encourage the lesser mind to ascend; it deprives the fine mind of the challenges it requires to grow, and simultaneously encourages the weak mind to think its own weakness acceptable. All men and women are NOT created equal in intellectual capacity. Robert Alter's book does not advertise itself as pleasurable reading, but aims to provide the reader with the painfully-acquired tools by which he or she may learn to derive true pleasure from literary language. Anyone who does not recognize this fact is succumbing to a standard American idea, one that holds that things are valuable only insofar as they are entertaining and easy. In point of fact, Alter is, as academics go, a VERY lucid and reader-friendly prose stylist. He's engaging, occasionally quite funny, and his range of reference is astonishing. His breadth of learning reminds one of Auerbach, Curtius, Wimsatt, Frye. These were scholars of unimpeachable erudition, quite unlike the over-specialized careerists that litter modern literature departments. One MAY, then, if one has a modicum of intelligence, derive pleasure from learning these sophisticated techniques from a master like Alter. But even if one finds Alter's lessons hard, the results of a serious effort to engage with him and master the basic lessons he has to teach---the willingness to undergo that arduous labor of looking up a gorgeously expressive word like "efflorescence," the mere knowledge of which e

The pleasures of interpreting literature

Published by Thriftbooks.com User , 17 years ago
Robert Alter is a lover of literature who reads and interprets it for pleasure. In this work he criticizes the academic practice of focusing on literary theory and babbling in abstract terms rather getting down to reading and enjoying the texts themselves. In this work he shows what he means by reading by reading some of the world 's great literature including the Bible, Shakespeare, Stendhal, Dickens. His book is structured into discussions of fundamental aspects of literature, character and its connection with reality, style, structure, allusion and what he calls 'perspective.'Alter is a brilliant ' close reader' and he continually illuminates the text in language which is clear and free of technical jargon. This is his conclusion," Reading is a privileged pleasure because each of us enjoys it, quite complexly, in ways not replicable by anyone else. But there is enough structured common ground in the text itself so that we can talk to each other, even sometimes persuade each other, about what we read: and that many- voiced conversation, with which, thankfully, we shall never have done, is one of the most gratifying responses to literary creation, second only to reading itself.

Published by Thriftbooks.com User , 18 years ago
I almost always underline/jot-notes-to-myself-in-the-margins when I read a book. This book, however, is so meticulously written, that I am breathless in the hand. My copy is spotless, just as Alter's polemic/ecstatic statement is without flaw. This book is endlessness, and I will let it inform me for the rest of my life.

A Remarkable and Truly Insightful Examination of Literature

Published by Thriftbooks.com User , 21 years ago
I found a copy of this book second-hand at the Strand in New York, and bought it on the basis of its title. Once I began reading it, however, I found the title to be slightly misleading. By "Reading," Alter does not so much mean the phsyical act of sitting down and reading a book (though he does touch upon that in his introduction). He is more concerned with issues of "reading" in the context of interpretation. His opening chapter is a refutation of certain modern cabals of lit-crit, after which he goes on to examine the very things that make literature literature: Metaphor, Allusion, Structure, Perspective, etc. His marvellous use of examples, his insightful analysis of these same examples, all make for a great reading experience. This book is not only for scholars, but also for anyone interested in looking more closely at literature. One feels awed at Alter's enormous breadth of reading. This book is truly a classic, and it's a shame it's generally unavailable. Perhaps Alter's little book is not "modern" (i.e. trendy) scholarship, but it is clear, straightfoward and eminently cogent. In a perfect world, this book would be read in every high school english class.
Copyright © 2020 Thriftbooks.com Terms of Use | Privacy Policy | Do Not Sell My Personal Information | Accessibility Statement
ThriftBooks® and the ThriftBooks® logo are registered trademarks of Thrift Books Global, LLC