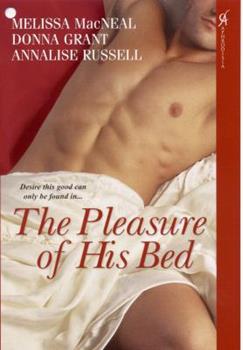 The Pleasure of His Bed

Naked, bound and aroused beyond their wildest imaginations, the women in these three stories prove how delicious complete surrender is. . . The Captain's Courtesan Melissa MacNeal A seafaring adventure turns wickedly sinful when stowaway Sophia Martine is caught and confined to the captain's quarters. What privateer Damon Delacroix doesn't know is how much Sophia longs to be dominated. But soon it is Damon who is enslaved as he gives up all control...

Published by Thriftbooks.com User , 14 years ago
"The Captain's Courtesan" by Melissa MacNeal. In 1717 Captain Damon Delacroix escorts the daughters of wealthy Lord Havisham from England to America. However, at sea he finds stowaway Sophia Martine, who enjoys his dominating her. "Ties That Bind" by Donna Grant. Betrayed Kingdom of Hesione Queen Jarina is outraged as she has become a sex slave in Pereth, home of her country's enemies. Then she meets her master King Kyros of Pereth whose touch makes her crave being his loyal subject. "In His Bed" by Annalise Russell. Chessa persuades the Viking Bodin to take her safely home in exchange for her being his sex slave while they travel. Neither expects to want to continue their relationship once he drops her off, but both find they need more. These three torrid erotic historical romances are filled with sex, sex, and sex starring strong alpha males and submissive females (even the queen). The lead cast is solid (no male pun intended) and the frequent trysts well written, but the plots are shallow with none containing any depth beyond the encounters. Harriet Klausner
Trustpilot
Copyright © 2022 Thriftbooks.com Terms of Use | Privacy Policy | Do Not Sell or Share My Personal Information | Accessibility Statement
ThriftBooks® and the ThriftBooks® logo are registered trademarks of Thrift Books Global, LLC