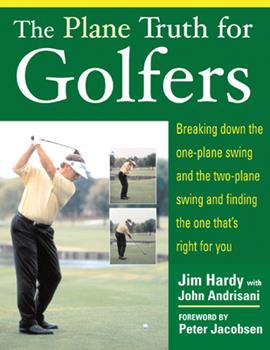 by Jim Hardy and John Andrisani

"Jim Hardy is the most knowledgeable teacher in golf. This extraordinary book will be the most revolutionary instructional book since Ben Hogan's Five Lessons."--Peter Jacobsen, Seven-time PGA Tour event winner Voted one of "America's 50 Greatest Teachers" by Golf Digest and ranked in the "Top 100 Teachers" list of Golf magazine, Jim Hardy is a veritable scholar of swing. He's been fixing the swings of professional and amateur golfers since 1977,...

Jim Hardy - Where Have You Been All My Life???

Published by Thriftbooks.com User , 16 years ago
Jim Hardy has written a true masterpiece of golf instruction. His approach holds much more benefit for the amateur than the professional. In fact, the only reviews that are critical come from instructors or others who think they already know the golf swing. Unfortunately, like Atkins vs. Ornish, one method may work for one person, but be poison to another. Of course, every golf instruction article reads like it holds universal appeal for all golfers. Jim Hardy cuts through all the nonsense, mystery and confusion. He gives two sets of fundamentals and recommends that you choose one or the other; the worst thing you can do is mix and match the two sets of fundamentals in an endless search for some combination that will work. Armed with the knowledge Mr. Hardy provides, you can even get something out of golf magazine articles (that usually contradict one another - sometimes within the same issue) because you can often tell whether they promote a one-plane or two-plane method. For example, anything ever written by Jim Flick makes perfect sense for two-plane players and is harmful for a one-plane player. I bought this book immediately upon its release and have made more progress in 1 year than in the many, many years before. I intentionally waited to post my review so that I could be certain my reaction wasn't just the latest fad. Jim Hardy has taken so long to perfect his theories that you can be sure there is nothing "fad" or "trendy" about this book. If you are a frustrated, confused amateur, your search is over! If I could, I'd give Jim Hardy ten stars!!!

An incredibly lucid full swing guide for all golfers

Published by Thriftbooks.com User , 17 years ago
Being a part-time golf instructor, I picked up this book merely to acquire another book to add to my abundant collection, figuring that I could perhaps pick up some new techniques. Little did I know that what I found was an absolute gem in the way of material on the full golf swing. It leaves all the other 4 and 5 star rated books far behind in the dust ... truly an eye opener even for someone who has spent quite a bit of time analyzing the golf swing. Jim Hardy is right on when he says that there is a lot of good instruction that is not applicable to a certain swing type, thus resulting in confusion and frustration for many golfers. Seldom is a swing technique ever framed around the type of swing one is trying to make. Jim Hardy frames these techniques perfectly. Without framing the techniques around the swing type (such as instruction or commentary such as that offered in magazines and guests on the Golf Channel), these techniques are contradictory and in many (most) cases detrimental to your particular swing type. Do you know what swing type you are? Do you know the techniques applicable to your swing type? If you are like to average golfer I've run across, probably not. Most golfers I know don't even know that there are different swing types and in actuality I knew about the Bobby Jones swing and the Hogan swing, but I also didn't have as fine as distinction between the two swings as provided by Jim Hardy in this book. This book is well organized and extremely lucid for golfers who have spent anytime at all trying to figure out how to hit the ball with any consistency. After my initial purchase, I ordered 5 more copies for my students and am ordering an addition 5 now. The feedback and results I've received from my students has been fantastic. Most have gone from the traditional classic swing to the one-plane swing. They are all saying that they hit the ball more solidly, straighter, and longer. My personal experience has been equally satisfying. Since I switched to the one-plane swing and applied the techniques provided by the author, I no longer have those one or two hole a round where the swing leaves you and you end up with a double or worse. My ball flight is consistently straight or with a slight draw (I get goose bumps just thinking about it). The occasional poor shot usually is hung a little right, but I know the cause is due to using a two-plane technique with a one-plane swing; generally I can correct this immediately on the next shot. I'm consistently hitting better shots, fairways and greens; no more struggling trying to figure out what I did wrong while still trying to play the course. I now have very few swing thoughts and can focus more on scoring. At the end of June, I was struggling in the high seventies and had the militaries, left, right, left, right ... sound familiar? One month later, I'm in the mid to low seventies and have broken par on a couple of occasions. The thing is, I think I can get

Saying up is up, down is down.

Published by Thriftbooks.com User , 17 years ago
It has been said that most golf instruction is patching together a swing with a bunch of tape. When one thing breaks with such a patchwork swing, the whole thing goes wrong, leaving the student nothing to get back on the wagon with. All he can do is go back for another piece of tape, and plod on. Golf instruction books are not too much different. Many will be based on a particular person's swing, but they will have one or two extra "accepted" facts about the swing. For example, a book may say that the head should move somewhat back and forth during the swing, that there is a large weight shift forward at the end, and that the hands should agressively release the club. Then they say that the swing plane itself should be flat and the club should not come past parallel at the top (you are still expected to make a "full shoulder turn", though). What happens? Your slice or hook magically returns, you hit all known varieties of shots, and are only saved by your putting... when that works. Jim Hardy's theory of there being two basic swing types which all golfers fall into is perhaps a little too clean cut. He himself admits that there are any number of "hybrid" swingers out there. However, he is, as far as I know, the only one to succesfully seperate two general classes of swing and divide up what swing fundamentals work best with which. This is an accomplishment in itself, and will likely set the standard for golf instruction from here on out. His conclusions, to infer from the book, seem to point to the idea that most swing ideas are OK, so long as they match the individual's swing style. This itself is a standard notion amongst teachers. However, too many teachers fall short in their ability to say why, or at times even which set of ideas fits what kind of swing. Hardy makes it clear what works for what swing, and why. He also goes the extra yard by saying what happens by "mixing" advice. Hardy does not write in over-defined terms. He constantly reminds the reader that the way he lays out for a particular swing style is subject to individual tendancies and body structures. He makes it clear what must be done, and then allows the reader to adjust to his own idiosyncracies. This, as well, is vastly different from other instruction tracts that speak of only one, highly precise, "correct" way. There is nothing vague or even abstract about Hardy's writing, but he knows that, as an example, for most golfers a certain type of grip may be right, but that the individual may need one that is weaker or stronger than standard. One extra note on the book: it only covers the full swing. There is nothing here about chipping, putting, etc.. This would have been way off topic, and there are already people dominating the market in this kind of research (Pelz, for example). If you are frustrated with most golf instruction, or find yourself going back to your pro every other week because the tape came loose on your swing, this book may be a good answer. If you are

A Revolution in Golf

Published by Thriftbooks.com User , 17 years ago
Confused? Tired of contradictory advise? Get this book and do what it says. It makes sense, and it works. Hardy points out that the reason so much contradictory advise exists is that there are actually two legitimate golf swings: the one-plane swing and the two-plane. You can play with one or the other, but what you must never do is mix elements from both swings. I watched the author's teaching segment on the Golf Channel and immediately started swinging consistently. I made better contact with the ball and got a straighter and longer flight than I have in the last two years. Next day, I got the book, read it and did just one of the drills, and for the first time I felt what it is like to release the club through the zone and hit powerful shots. Never has a swing felt so effortless and so exhilirating. I was hitting my 4-iron as far as I had been hitting my 3-WOOD. I still have lots of work to do, but for the first time I know the direction I'm heading. Pro Peter Jacobsen has been Hardy's guinea pig for 15 years, and he's excited about this revolution in the golf swing. But he's not half as excited as this hacker.

How to Find the Golf Swing that Works Best for You.

Published by Thriftbooks.com User , 17 years ago
JIm Hardy offers unique insight and perspective into the two basic golf swings in general use today. One is what he calls the "one-plane" swing as used by Ernie Els, Ben Hogan, and Michelle Wie. The other is the "two-plane" swing used by David Toms, Bobby Jones, and Davis Love. After helping the reader identify which swing he or she is using (or should be using), the author provides an in-depth look at the keys to making either swing work. For newer golfers, the book will help establish the fundamentals of the swing chosen. For more advanced golfers, the author provides an excellent framework for identifying exactly what belongs in your swing and what doesn't. This is especially important given all the conflicting instruction, books, articles, and television commentaries on "the" golf swing. Owning over 200 golf-related books, I can say that this is probably the most valuable one I've read to date. In the first week after reading it, I've already been able to modify a few things that don't belong in my swing and a few things I need to add to become more consistent. I strongly recommend this book to any serious golfer.
Trustpilot
Copyright © 2023 Thriftbooks.com Terms of Use | Privacy Policy | Do Not Sell My Personal Information | Cookie Preferences | Accessibility Statement
ThriftBooks® and the ThriftBooks® logo are registered trademarks of Thrift Books Global, LLC