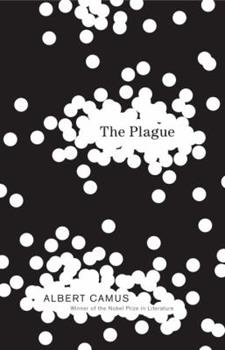 "Its relevance lashes you across the face." --Stephen Metcalf, The Los Angeles Times - "A redemptive book, one that wills the reader to believe, even in a time of despair." --Roger Lowenstein, The Washington Post A haunting tale of human resilience and hope in the face of unrelieved horror, Albert Camus' iconic novel about an epidemic ravaging the people of a North African coastal town is a classic of twentieth-century literature. The townspeople...

Published by Denisse , 3 years ago
The characters are what really stood out to me in this book. All unique, well developed and likeable which isn’t something I find often. A must read classic

THE NOVEL "POR EXCELENCIA" FROM CAMUS

Published by Thriftbooks.com User , 20 years ago
Having submitted this review in spanish and not having it posted, I'll try again in english.......Camus reached fame with his elaborations about the concept of the absurd (the purposeless search of the meaning of existence in a universe void of any)in three works: The Stranger, a novel; Caligula, a teathrical opus; and The Myth of Sisyphus, a recopilation of philosophical essays.In his second famous novel, The Plague, we find a different Camus. Perhaps, more concerned about moral values and solidarity between human beings, in the face of massive destruction. The plot of the novel unfolds in the city of Oran, Algeria. The central image has to do with a rat invasion that causes a plague epidemy, with disastrous consecuences. Here we find metaphorically portraited the invasion by the Nazis in 1943 of non occupied France (Camus said that the Nazis came like rats).Then we find a description of the evolution of the plague, the reaction of the authorities (at first, self denial), the progressive isolation of the town from outside world, and on the onset the "normalization" of the tragedy (people grow accostumed to live with it, and become zombies). After the evolution and the growth of the problem, the inhabitants become completely isolated from the outside, and become prisoners in the inside, due to the drastic measures taken by the authorities. The plague becomes a collective problem that requires recognition and reaction by all. We have here a clear metaphorical reference to the need of a collective reaction to the Vichy government by all the citizens. The call to participate and react becomes a moral issue. Camus then describes with certain detail the soccer stadium where people are forcibly concentrated by the authorities, and this is an allusion to the Nazi concentration camps. More than the persons, the protagonist of this novel is the city. In the sense that the values of solidarity and participation against a common disaster or enemy are called for, this novel is much more developed, from an ethical standpoint, than The Stranger.

Published by Thriftbooks.com User , 20 years ago
The Plague is easily one of the best ten novels ever written, far surpassing even the erstwhile classic The Stranger. Whereas we examine an uncommonly cold-hearted man in a normal world in the pages of The Stranger, in this novel it is a harsh outside world which closes in on a group of fascinating characters. It is in this much more developed context that Camus' most remarkable notions of humanity, life, and existence can be fleshed out and communicated more effectively. The lessons of good, normal lives in a world gone mad are much more instructive and meaningful than the observations in The Stranger of a man gone mad in a normal world. A word to the wise: when large numbers of rats come out of the woodwork and commence dying nasty, bloody deaths in the streets and houses, something is definitely wrong. In the port city of Oran, the population ignores the signs of danger and only grudgingly admits that an epidemic, a form of the bubonic plague to be exact, has taken root in their city. The protagonist, Dr. Rieux, is a doctor who finally helps convince the authorities to take extreme measures in the interest of public safety and to eventually quarantine the entire town. Over the course of the novel, we get to observe the manner in which Dr. Rieux, his companions, and prominent men of the community react to the worsening plague and its social consequences. Dr. Rieux has just sent his unhealthy wife off to a sanitarium before the plague breaks out, and he must suffer her absence alongside the stresses of working 20+ hours a day trying to save people's lives while accomplishing little more than watching them die horrible deaths. Dr. Rieux's attempts to make sense of everything is a basic pulse of the story; an atheist, he cannot find happiness but goes on day after day fighting the disease with all his might because that is what he as a doctor is supposed to do. His friend Tarrou supplies much of the knowledge we glean about the reactions of society as a whole as month after month of isolation continues in the face of death's greedy fingers. His journal records small but important facts about all manner of men, yet he himself cannot be said to find ultimate peace. We first encounter M. Cottard after he has hanged himself and been saved before death. A criminal type yet not a bad man, his initial worries over inquiries into his suicide attempt fade away as the plague's grip on Oran tightens. He emerges from a self-imposed exile to actually become a communicating member of society; he alone seems to enjoy the plague because it makes everyone else like him, forced to live each day with the fear of a brooding, horrible fate. Then there is M. Grande, one of my favorite characters in all of literature. A simple civil service employee, he devotes himself to volunteer work computing plague statistics and the like while still continuing his fervent efforts at writing a novel. Grande's wife left him years earlier because he got too wrapped

Published by Thriftbooks.com User , 21 years ago
An overwhelming feeling of meaninglessness is the enemy in all of Camus' work. The Plague is a parable about living with this spiritual dilemna which puzzles and threatens existence. But it can be read on a number of levels at the same time. You can read it as symbolic of Nazi occupation of France, or French occupation of Algeria, or any such condition where men feel hopeless in the face of historic events, time, the universe. Camus' characters are often close to surrender or indifference but some basic human need urges them on and makes them continue despite awareness that there is little chance of success. Camus loved the pure earth best of all and his scenes which place a man alone looking at the sea for instance have an instinctual feel that sets him apart from someone like the exclusively cerebral Sartre. It is a book which changes each time you read it. What is happening in the world at the time you are reading it affects your interpretation of what this book is saying. Parables are powerful because they work on you in ways that are not always specific, like myth. They feel real or they don't. This book captures the feeling that existence is an ongoing struggle against(and perhaps this is part of the book power and appeal)an ultimately unnamable and unidentifiable foe.

Love, Exile, and Suffering Illuminated by Life Around Death

Published by Thriftbooks.com User , 22 years ago
What is the meaning of life? For many, that question is an abstraction except in the context of being aware of losing some of the joys of life, or life itself. In The Plague, Camus creates a timeless tale of humans caught in the jaws of implacable death, in this case a huge outbreak of bubonic plague in Oran, Algeria on the north African coast. With the possibility of dying so close, each character comes to see his or her life differently. In a sense, we each get a glimpse of what we, too, may think about life in the last hours and days before our own deaths. The Plague will leave you with a sense of death as real rather than as an abstraction. Then by reflecting in the mirror of that death, you can see life more clearly. For example, what role would you take if bubonic plague were to be unleashed in your community? Would you flee? Would you help relieve the suffering? Would you become a profiteer? Would you help maintain order? Would you withdraw or seek out others? These are all important questions for helping you understand yourself that this powerful novel will raise for you.The book is described as objectively as possible by a narrator, who is one of the key figures in the drama. That literary device allows each of us to insert ourselves into the situation. Let me explain the main themes. Love is expressed in many ways. There is the love of men and women for each other. Dr. Rieux's wife is ill, and has just left for treatment at a sanitarium. Rambert, a journalist on temporary assignment, is separated from his live-in girl friend in Paris. Dr. Rieux's mother comes to stay with him during his mother's absence, so there is also love of parent and child. The magistrate also loses his son to the plague after a desperate battle. Separations occur because of the quarantine on Oran, which causes love to be tested. What is love without the other person being present? The characters find that their memories soon become abstractions. But they reach out to establish new love with each other. Tarrou, who is also caught in Oran, decides or organize a volunteer corps to help with the sick and dead. Rambert decides to stay in Oran to help after having arranged to escape the quarantine. The survivors find succor in increasing closeness with each other. Rieux and Tarrou become close, almost like brothers. Even Rieux's patients become people with whom he develops an emotional bond, even though the waves of death become an abstraction as he can do little to avert them. The priest figure also helps to explore the notion of love for God and God's love for us. The exile theme is reinforced by the quarantine. People cannot leave Oran. The disease itself causes that exile to become worse. If someone in your household becomes ill, each well person has to be quarantined. So you may be living in a tent in the soccer stadium wondering what is happening to the rest of your family. Cottard