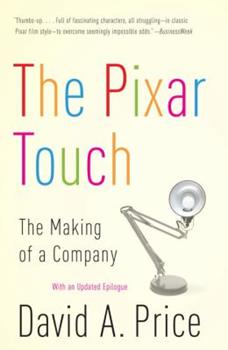 The Pixar Touch: The Making of a Company

by David A. Price

A Wall Street Journal Best Book of the Year The Pixar Touch is a lively chronicle of Pixar Animation Studios' history and evolution, and the "fraternity of geeks" who shaped it. With the help of animating genius John Lasseter and visionary businessman Steve Jobs, Pixar has become the gold standard of animated filmmaking, beginning with a short special effects shot made at Lucasfilm in 1982 all the way up through the landmark films Toy Story, Finding...

Published by Thriftbooks.com User , 13 years ago
Author David Price gives us several stories wrapped into one with his "The Pixar Touch: The making of a Company." Students of the movie industry, computer graphics, and those interested in working in a development stage company (any industry) will find this a most satisfying book. Price pieces together the converging factors that led to the creation and eventual success of Pixar - the University of Utah's growing influence in computer animation; George Lucas' desire to modernize the tools of filmmaking after the success of "Star Wars" and his pulling together many of the Pixar's eventual founders as part of Lucasfilms Computer Division; frustrated Disney animator, John Lasseter's termination from Disney; Steve Jobs belief that Pixar's Image Computer had the same investment potential of his Apple II and his intense unwillingness to suffer another professional defeat; Disney's Jeff Katzenberg's growing interest in computer animation and his ultimate decision to participate in the making of "Toy Story"; and Disney's growing fear that it was losing its premier global franchise to the upstart, Pixar. Pixar's evolution into one of the world's greatest brands did not come easily. In the early years, Jobs was not the visionary many claim him to be. He had a different vision for the company and was a very reluctant supporter of the animation group. He tried to get Pixar into the medical imaging field, tried to sell the company to Microsoft, and abused all of the founding employees by taking away their stock in exchange for another capital infusion to keep the company afloat. In addition, the elite of Disney animators, an early partner, argued that computer animation was a dead end - character animation required nuance upon nuance - nuances too fine to capture in a computer. There were few who had the needed tolerance to put up with the awfulness of an early technology. This is a great story of American business and rugged individualism. This is a story about a core team that stayed the course, worked long hours, and overcame immense obstacles in the service of a vision, to transform an industry through technology - to make great computer animated movies.

Published by Thriftbooks.com User , 13 years ago
"The Pixar Touch" is a book about business and technology and filmaking. Author David Price is remarkable in his skill at keeping all three themes not only interesting, but engrossing as well. Pixar began as something of a Quixotic quest three decades ago with some young men having a vision not only of applying computer technology to traditional animation, but making full-length computer animated movies as well. Their pursuit takes some of them through stints at the mecca of traditional animation, the Disney Studios, while others were to be found at universities. All the Pixar founders and some of their creative stalwarts found themselves at Lucasfilms, where they tried to peddle their concept and do things beyond special effects, commercials and impressive short films. Along the way, they invent or refine many of the techniques at the core of sophisticated computer animation. It is not the land of milk and honey, though. Lucasfilm wants to be rid of Pixar and tries to peddle it to everyone they could think of. One of the first to be offered Pixar was Steven Jobs, who had been forced out of Apple. Lucas wanted ten million - Jobs offered five. A year later, after failing to sell Pixar at their asking price, Lucasfilm sold the company to Jobs for five million dollars. There follows an almost heroic story of a few men struggling to acheive their vision of computer generated animated feature-length movies. Over the next few years, backed by more than fifty million dollars of Jobs' money, Pixar finally makes a deal with Disney to distribute a feature length animated film. It is a fascinating process to see how the now legendary "Toy Story" came to be. None of the principals in Pixar had ever made a feature length movie before. And no one really knew how audiences would react to 90 minutes or so of computer created animation. "Toy Story", of course, was a major success as were the next several Pixar produced films. Price excels at telling the business story of Pixar from its beginnings to its ultimate $7.4 billion acquisition by Disney, which left Steve Jobs as the major stockholder of Disney. And quite a story it is, by turns, of good luck and then hard business dealings. He also does an excellent job of explaining the technology of computer generated animation and the agonies of creating feature length movies. Overall, Price does a simply superb job of telling the stories of Pixar, the development of computer animation, Steve Jobs and Disney (in part) and the lives of the Pixar founders and many who joined along the way. It is quite a story and exceptionally well told by Price. Jerry

It's about the Story

Published by Thriftbooks.com User , 13 years ago
I am a teacher who uses stories to draw students into an academic concept. I love a good story that teaches. This one exceeds any expectations. It's about the growth of software that I use daily from concept to reality; from the unaffordable to the common man. It's about dreams that percolate FOR YEARS and not just achieve instant stardom. It's about patience and conflict and overcoming some obstacles and being taken down by others. It is about character building while building characters that have become a mainstay of our culture. In short, it's inspirational for those of us who continue to work on our ideas and dreams while others scoff at our million to one odds at success. The Pixar Touch motivates us to reply: "so you mean I still have a chance." This is a must read for all of those who lead creative teams or who dream to create!

This book went to Infinity and Beyond!!

Published by Thriftbooks.com User , 13 years ago
I am an animator and have always had an affinity for PIXAR. When I heard about this book I knew I needed to read it immeadiately. It goes through the entire history of PIXAR with some detailed background on computer animation itself. Also it gives brief back stories of each of the major players that started PIXAR and/or have been major players since then. I have never found a non-fiction book more interesting in my life. Once you pick up this book you actually will no be able to put it down. There is however a lot of tech talk so if you do not know much about computers or animation you may not like it as much, but it really is a good and fast read. I recommend it to all who are truly interested in PIXAR, computer animation, and even the growth of a small business.

Published by Thriftbooks.com User , 13 years ago
I was glued to this book about Pixar's humble beginnings and inspiring ascension into the firmament. In true Cinderella fashion, the company starts with nothing, gets no respect, but eventually its dreams come true. It's a thought-provoking journey. Pixar's story interweaves with that of the Walt Disney Company throughout its history. Founding CEO Ed Catmull's college dissertation involved creating a texture map projecting Mickey Mouse and Winnie the Pooh onto undulating surfaces. When Disney decided to replace its ink-and-paint process with computers, it had Pixar test the system with a scene from The Little Mermaid. In 1991, Disney agreed to finance Pixar's first full-length feature film, Toy Story, but production was shut down in late 1993 because the plot dictated that Woody be mean and petty. Disney rewrote the script to make the toy cowboy more sympathetic. And in January 2006, Disney agreed to acquire Pixar for 287.5 million shares of Disney stock. The story works in the biographies of some fascinating men. Catmull turned down Disney when it approached him to help design the Walt Disney World attraction Space Mountain. Steve Jobs, newly thrown out of Apple Computer, bought Pixar for just $5 million, only to discover he had to spend twice that to keep it afloat. You read how John Lasseter advances from a skipper on Disneyland's Jungle Cruise to the principal creative advisor of Disney and Pixar animation. The book includes a handful of black and white photos, and eight glossy, full-color pages with images from Pixar movies Toy Story, A Bug's Life, Toy Story 2, Monsters, Inc., Finding Nemo, The Incredibles, Cars and Ratatouille. Here's the chapter list: 1. Anaheim 2. In the Garage 3. Lucasfilm 4. Steve Jobs 5. Pixar, Inc. 6. Making it Fly 1 7. Making it Fly 2 8. "It Seemed Like an All-Out War" 9. Crisis in Monstropolis 10. Emeryville 11. Homecoming Appendix 1: Pixar Academy Awards and nominations Appendix 2: Pixar Filmography
Copyright © 2022 Thriftbooks.com Terms of Use | Privacy Policy | Do Not Sell My Personal Information | Accessibility Statement
ThriftBooks® and the ThriftBooks® logo are registered trademarks of Thrift Books Global, LLC