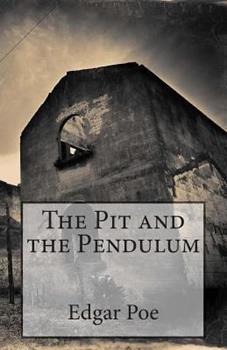 The Pit and the Pendulum

"The Pit and the Pendulum" is a short story written by Edgar Allan Poe and first published in 1842 in the literary annual The Gift: A Christmas and New Year's Present for 1843. The story is about the torments endured by a prisoner of the Spanish Inquisition, though Poe skews historical facts. The narrator of the story describes his experience of being tortured. The story is especially effective at inspiring fear in the reader because of its heavy...

Published by Thriftbooks.com User , 16 years ago
Chelsea Hall October 13, 2005 This year I read The Pit and the Pendulum, by Edgar Allen Poe. It's about a guy who is captured and tortured by a pendulum, but shortly after is thrown into an abyss. My favorite artist, Griss Grimly makes drawings from Poe's stories. So since I love Griss so much I decided to check Poe out. I'd recommend this story to any one who likes Griss Grimly's art who is over the age of thirteen. If you don't like guar, crazy, magical, scary, mystery books you wouldn't like this story, but if you do like everything I said you like this book. This book was wonderful because of all the torture. The guy in this book was hearing people that really weren't there. For example he said "I saw the lips of the black robed judges. They appeared white whiter then this sheet upon which I write these words and thin even grotesquely. Also another scary moment in this story is when the pendulum gets closer and closer to his rob, it was very suspenseful. It said "down steadily down it crept. Down certainly, relentlessly down". The only thing wrong was it was a little hard to understand. Like "it enveloped my limbs and body close in all directions, save in the path of the destroying crescent". My over all opinion was a wonderful experience. It was fun and not boring, unlike all the other books I've read. Anyone looking for horror stories, which love terror scary and fun you will like this book.

Published by Thriftbooks.com User , 16 years ago
Edgar Allen Poe (1809-49) is one of the most famous of American authors of mysterious and macabre stories, certainly the most famous 19th century one. The Pit and the Pendulum was first published in 1843, and is one of his best known works. The early part of the story has a diffuse, dreamlike quality, but before you know it, the story quickens and sharpens as it descends into hair-raising horror. The hero must strain and struggle to stay alive, but will the Inquisition let him live, can nothing save him? OK, it sure is easy to see why this story is recognized as a classic work of American literature! It is scary, in the older way, without recourse to blood and severed limbs, and keeps you glued to your chair reading it. I am now quite sorry that it took me so long to get around to reading this story, it's great, and I highly recommend it. SPOILER BELOW: By the way, is it true that this story is a Christian allegory? It is inevitable that, regardless of what the hero does, he will end up in the pit (Hell). When he avoids it early on, you see the figure of time with its pendulum slowly moving towards taking his life away, and afterward the pit is still inevitable. And then, when all hope is lost, and his efforts won't save him, it is the hand of God that reaches out to save him. Read this story and decide for yourself!

One of Poe's best

Published by Thriftbooks.com User , 19 years ago
I really enjoy very much Poe's short stories, mainly those where he gives us only a glimpse in some part of his main character's life. "The pit and the pendulum" has almost no begginig and no end. It's the story of a man condemned to death by the Inquisiton. This death is not a simple one, since he is thrown in a dungeon with no light and lots of dangers. This short story is full of anguish and told in an almost hysterical way. The reader discovers the horrors of the dungeon together with the main character. We don't know his name, we don't know what he did to be condemned, we don't know where he came from, we don't know nothing at all about him. And yet we keep turning the pages to see whet's going to happen next. Poe had a dark style of writing; he could toy with his reader's minds as well as with his character's minds, and that's what makes him a master of romantic-gothic storytelling. Read with the lights on.Grade 9.6/10

Published by Thriftbooks.com User , 19 years ago
I think that this was a very exciting book. It's one of those books where you need to keep reading to find out what happns next and it's like you can't stop. The narrator is stuck in the Spanish inquisition and he discovers a pit--no one knows whats down there, but you can guess by context clues. Then he awakens to a pendulum swinging over him, that comes down so slow. Will he be cunning enough to escape? Read and find out!

Published by Thriftbooks.com User , 21 years ago
I was sick sick unto death... just a look into a bizarre descent into Hell.
Copyright © 2020 Thriftbooks.com Terms of Use | Privacy Policy | Do Not Sell My Personal Information | Accessibility Statement
ThriftBooks® and the ThriftBooks® logo are registered trademarks of Thrift Books Global, LLC