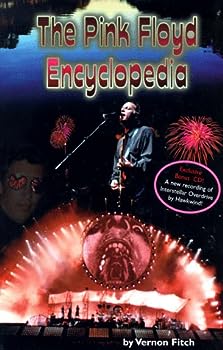 This description may be from another edition of this product. Self-proclaimed rock historians will delight in the scope and detail of this all-inclusive encyclopedia of Pink Floyd. A close study of each album is accompanied by an exhaustive listing of their...

Published by Thriftbooks.com User , 15 years ago
Within the first few minutes of opening this book, I was mesmorized. The attention paid to fact and detail is remarkable. This book contains EVERYTHING there is to know about Pink Floyd's history right down to the instruments that the individual members used and the years that they used them. The entire book is an alphabetical reference guide. One can look up song titles, album titles, current members, studio performers by name. Even obscure references within songs ara catalogued here. This is an absolute must have for the Pink Floyd enthusiast.

Published by Thriftbooks.com User , 21 years ago
Vernon Fitch has compiled one of the best books regarding Pink Floyd. There is hardly any subject not covered in this book. It is a Pink Floyd, Syd Barret, & Roger Waters fan "must have" book. Mr. Fitch KNOWS his Floyd! There are one or two errors (for example, Roger Waters' birthday is given as 9 Sept. 1943, It really is 6 Sept. "REG" can verify that for you). This book really has it all, and, in light of the recent Roger Waters' tours and the release of "The Wall" DVD/VHS releases and the hopefully soon to be released "Is There Anybody Out There" CD, I would venture to say Mr. Fitch is at work on a supplemental book In short, pretty much EVERYTHING about Pink Floyd is here, in encyclopedia format (not "in depth", of course, because Mr. Fitch is a very concise writer. I find myself looking up all kinds of things in this book. The appendices are great! Live appearances, what equipment and instruments are used by all the members, alternative Gilmour guitar tunings, and the good old "Publius Enigma" Plenty of hours of great reading!Thank You

Every Pink Floyd fan will learn something new and fun

Published by Thriftbooks.com User , 22 years ago
I've learned much about Pink Floyd from many other books about them and a bit from my own research, but Vernon Fitch managed to include heaps of previously unpublished information. His book has an alphabetical section that's easy to use for quick reference and fun to just browse at random. Musicians will drool over the rare info about the equipment and tunings used over the years. Many fans will be surprised to hear of the enigma of The Division Bell, which hasn't been covered by a Pink Floyd book before this. What shall we do to fill the empty spaces in our knowledge of Pink Floyd's music? Get this book!

Published by Thriftbooks.com User , 22 years ago
The Pink Floyd Encyclopedia is the ultimate Pink Floyd reference guide. Everything you've ever wanted to know about the band, and more, from A-Z. Here's an example. In a recent conversation, I was asked who produced the Pink Floyd album "Meddle." Having the book nearby I immediately looked up the entry to learn that the album was produced the band. I also learned what was on the album cover and what the cover and the title of the album represented. There was a discography listing US & UK releases of this album as well a list of the dates the band recorded the album. There was a note that the album was the first Pink Floyd album recorded on 16 tracks also the date it was released and the sales awards and chart success. These details apply to every album release and even further detail for every song that band has recorded or even had a part in producing for Pink Floyd, its members' solo work or another band. Song concepts, the known musicians, and what instruments they played, studio recording dates, background voices, sound effects and the history of the song in live performance are some of the many details offered by the reference encyclopedia. Other highlights include a listing of all known live performances by the band or as a solo artist and a detailed look at the history of the band's equipment through the years from album sessions to live performances.

Published by Thriftbooks.com User , 22 years ago
an exhaustive study in everything pink and useful for the whole range of fans from those just just enjoy the music, to those who are obsessed. you'll learn something new everytime you pick up, and written by some of the most famous pf fans online.
Copyright © 2020 Thriftbooks.com Terms of Use | Privacy Policy | Do Not Sell My Personal Information | Accessibility Statement
ThriftBooks® and the ThriftBooks® logo are registered trademarks of Thrift Books Global, LLC