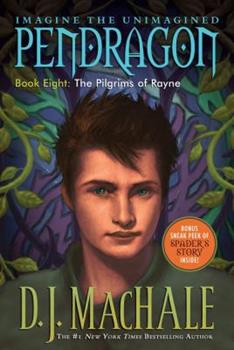 The Pilgrims of Rayne, 8

(Book #8 in the Pendragon Series)

When Bobby Pendragon first arrives on the tropical world of Ibara, he finds paradise. As he works to uncover clues about the turning point this seemingly idyllic territory will soon face, all he can determine is that the people of Ibara are blissfully happy. It's not long before Bobby discovers, however, that they are also blissfully...oblivious. The leaders of Ibara are keeping a devastating secret from their people, one that gives Saint Dane all...

The End is Near?

Published by Thriftbooks.com User , 14 years ago
This is perhaps the best book of the series. The last book, The Quillan Games, was good but then got rushed and confusing at the end (to me). But The Pilgrims of Rayne did a great job of straightening out after the bump in the road. The best part to me was that when it switched back and forth to Courtney and Bobby, there was action on both sides. The past books have had some good but few GREAT instances of action from Courtney and Mark. But this book has great action on both sides. If you have been reading up to this book, you probably don't need me to tell you to read this book. This book is full of plot twists and unexpected surprises that I couldn't put the book down. Now, leaving off in a semi-cliffhanger, I can not wait until the next book. Great edition to the Pendragon series.

Published by Thriftbooks.com User , 14 years ago
Bobby and Courtney were headed to Third Earth last time we left them. How Courtney makes it to First Earth and Bobby to Ibara, I'm not going to tell you, but what I will say is that they each have the wildest ride they've ever had. Pilgrims doesn't let down and is as strong as the previous books. It is definitely setting us up for an even bigger grand finale. I'll warn you, the ending of this book is sure to surprise and you'll prbly want to send an e-mail off to DJ immediately asking him why the heck he stopped where he did. I know I sure wanted to! If you've been with Bobby since the first print of Merchant of Death or if you just caught up with his adventures, you'll want to read this book. Don't stop here. The Pendragon series is getting better and better.

Published by Thriftbooks.com User , 14 years ago
I thought this was one of the best Pendragon books yet! There was so much action and great plot twists. I just wish he would hurry up and finish the next one because that was a huge cliffhanger at the end.

another thrilling addition to the Pendragon series

Published by Thriftbooks.com User , 14 years ago
in the Pilgrims of Rayne, we join Bobby Pendragon and friends in another adventure threw time and space. after a huge defeat on Quillian, Bobby is more determined then ever to stop Saint Dane and rescue Mark from his clutches. he follows Saint Dane to the tropical world of Ibara and the island city of Rayne, where the people live a carefree and happy life but underneath this seemingly peacfull comminity lies a dark secret. the leaders of Rayne are keeping a dark secret from their people, a secret off their past, a secret so devistating it would change everything on Rayne. and it is up to Bobby to figure this secret out before the gathering storm threatens to destroy the people of Rayne. meanwhile, Courtney travels to First Earth and teams up with Gunny's acolyte Dodger. they are on a quest to save Mark who has come to this territory with intents of changing the future. as time counts down, can Courtney save Mark? and can Bobby stop Saint Dane from claiming his third territory? the action comes fast in this book, with a good plenty of plot-twist that simply urge the reader on and with a diabolic cliff-hanger, it will have fans eagirly awaiting the ninth book.

Bobby Pendragon Returns With a Vengeance...Literally

Published by Thriftbooks.com User , 14 years ago
Bobby Pendragon is back and he is older, more passionate and Halla is more complex than ever before. Welcome to the latest edition of the Pendragon series. The Pilgrims of Rayne is the best installment thus far, and there will be more to follow! We know that the territories all have a turning point, but we have never seen anything like what happens in the latest installment. Do you miss Loor and Gunny and Spader? How about Alder? The Pilgrims of Rayne does not disappoint. MacHale gives us everything we want this time around. I mean everything. If you ever thought, "Why doesn't Bobby do this, or that?" It is all in here. The territories have been mixed and nothing is what it once was. Make a wish, choose an adventure you would like to see, revisit territories, feel like everything is under control and all Halla breaks loose. Sit back and enjoy the ride as Bobby Pendragon discovers more about who he is, what he is, what he can do, what he should be doing, and for the first time, what he might do without his closest friends who are no longer what they once were either. The Pilgrims of Rayne is the best yet! The new Harry Potter has a lot to live up to. Hobey ho, let's go!
Copyright © 2020 Thriftbooks.com Terms of Use | Privacy Policy | Do Not Sell My Personal Information | Accessibility Statement
ThriftBooks® and the ThriftBooks® logo are registered trademarks of Thrift Books Global, LLC