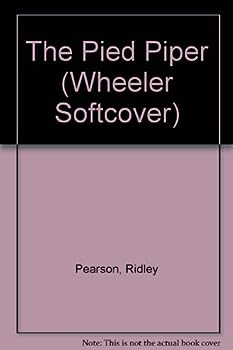 (Book #5 in the Boldt & Matthews Series)

In Seattle, they're calling him The Pied Piper - someone who comes in the night and takes children away. To newly promoted police lieutenant Lou Boldt and police psychologist Daphne Matthews, it's clear this isn't about a single lunatic or random kidnappings: these crimes are well orchestrated, well executed, and, most chilling of all, occurring in cities across the country.Boldt is the first to establish that behind the kidnappings is a well-financed...

Published by Thriftbooks.com User , 21 years ago
The Pied Piper by Ridley Pearson Published by Hyperion, New YorkThis is the first book I've read by Ridley Pearson but it definitely won't be the last. The book is filled with believable characters with interesting lives outside of their work and relationships that makes the skin tingle with tension. The plot is skillfully crafted and moves quickly from the kidnaping of young children to the internecine competition between the FBI and the Seattle Police Department. Someone within the two groups is giving the kidnapers inside information and when Lou Boldt's child is kidnaped and he is told to slow down the investigation or he won't see his child again, the tension rises to unimaginable heights. For those who are parents and perhaps even those who arnt, the thought of losing a child to kidnapers brings a dimension and intensity to the plot that is at times unbearable.This is a well written and carefully crafted book filled with excitement and enough twists and turns of plot to hold anyone. I can't wait for the next one.

Can't put the book down

Published by Thriftbooks.com User , 22 years ago
I usually read stories that take me to another place and another time, reality isn't an issue. However, I thoroughly enjoyed Ridley Pearson's Pied Piper. It brings to light a problem in the world, albeit an important one; missing/abducted children. This story is from the perspective of those involved attempting to recover the children and break the cycle of this horrible crime. It's a must-read!

WOW! definitely one of the best books i've ever read

Published by Thriftbooks.com User , 22 years ago
what a great book! i could put it down, but i couldn't stop thinking about it, because mr. pearson has such a subtle touch. his characters are finely drawn, his plot is intricate but not overly done, his motivations are beleivable and his writing... well, other writers are first-rate, but mr. pearson is on a plane all by himself. his characters, particularly the women, are strong, unique and beleivable, not reincarnated caricatures of some old suspense novel. if you only read one book this year, make sure it's The Pied Piper.

Published by Thriftbooks.com User , 22 years ago
A superbly written thriller that grabs you by the throat and doesn't let go until the very last page. Wonderful characters and plot. And he explains what has driven the criminal to crime which ties things up nicely for the reader. Now I have to read everything he's written. Thanks!

Published by Thriftbooks.com User , 23 years ago
What a TERRIFIC read!I work in a bookstore, so every day I have customers talking to me about "great reads." When one of my favorite customers told me that she COULD NOT PUT DOWN Ridley Pearson's The Pied Piper -- that she literally only got 1+ hours sleep because she HAD to finish the story -- I knew that I had to give Ridley's story a try.BIG MISTAKE!Now I am going to have to wade my way through his backlist because I absolutely, POSITIVELY have to read more stories with Lou & Daphne & Company!Sheesh, the nerve of authors for writing FABulous reads. PIPER did start slowly for me -- but when Lou's daughter, Sarah, became a victim of the Piper, I was caught hook, line, & sinker. Ridley Pearson threw so many twists & turns throughout the story that I had to go back & reread spots to make sure I understood what was happening. It also seemed as if there was a red herring on every page -- so much so that you soon will enter the world of paranoia that Lou is feeling as he is desperately trying to save his daughter & solve the kidnapping.The ending builds to superb climax -- I was so into the story that I was literally yelling at the characters to DO SOMETHING! Wonderful stuff. If you like Sandford's Lucas Davenport, Patterson's Alex Cross, and Cornwell's Scarpetta, you'll LOVE Ridley Pearson's Lou Boldt.BTW, I just picked up & started to read Ridley's BEYOND RECOGNITION ... the first chapter grabs you by the throat & doesn't let you go ... but that's for another review!
Copyright © 2020 Thriftbooks.com Terms of Use | Privacy Policy | Do Not Sell My Personal Information | Accessibility Statement
ThriftBooks® and the ThriftBooks® logo are registered trademarks of Thrift Books Global, LLC