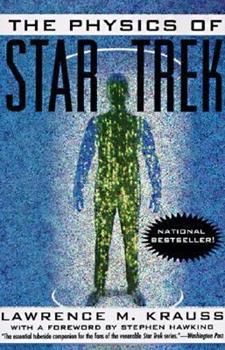 The Physics of Star Trek

What warps when you're traveling at warp speed? What's the difference between a holodeck and a hologram? What happens when you get beamed up? What's the difference between a wormhole and a black hole? What is antimatter, and why does the Enterprise need it? Are time loops really possible, and can I kill my grandmother before I am born? Discover the answers to these and many other fascinating questions from a renowned physicist and dedicated Trekker...

Published by Thriftbooks.com User , 15 years ago
...for anyone who likes both "Trek" and science. Laurence Krauss shows that it is possible to enjoy "Trek" while using it as a tool to teach some physics fundamentals (usually to the effect that "Trek" physics/technology is impossible or wildly improbable). The foreword is by Stephen Hawking, also a fan, who endorses the imagination-expanding possibilities of science fiction. Remember how many engineers were inspired by the example of the late "Scotty" (he was even given an honorary engineering doctorate for it). Read, and enjoy - and learn more about the awesome universe in which we live.

Published by Thriftbooks.com User , 16 years ago
Lawrence Krauss examines the technology of the Star Trek universe and discusses whether such technology is possible or not according to physics as we know it today. As it turns out, most of the technology is either impossible or improbable when considering the laws of physics. For example, to use warp drive or impulse drive, it would take more energy than the entire planet uses at present. Another example, which would probably be impossible, is the transporter. Krauss raises the issue of whether the transporter transmits the matter or just the information of a person. If it transmits the matter, there is the problem of scanning, storing, and transmitting the data of the location of each molecule,--a feat that would take an astronomical amount of calculating power. If it only transmits the data, then the transporter is effectively a human replicator. If that is the case, what do they do with the original body? Also it raises a lot of ethical issues as well. I really recommend this for those fans of Star Trek who are interested in finding out if the science in the Star Trek world is feasible or not. It's very easy to read and very entertaining too. Check it out.

Scotty was right: "You canna change the laws of physics."

Published by Thriftbooks.com User , 21 years ago
I never took biology or chemistry let alone physics in school, so I am easily intimidated by big words with Latin prefixes and Greek suffixes that explain the mysteries of the real world let alone the Star Trek universe. Lawrence M. Krauss, Ambrose Swasey Professor of Physics and Professor of Astronomy and Chairman of the Department of Physics at Case Western Reserve University might be making stuff up the same was as Gene Roddenberry and his heirs, but he sure makes a compelling case that is easily understood even by scientific illiterates such as myself. He certainly has the credentials, even if he spells his first name funny.This book takes nitpicking about Star Trek to a whole new level, and I mean that in the best sense of the world. "The Physics of Star Trek" is divided into three sections. The first, "A Cosmic Poker Game," explores the physics of inertial dampers and tractor beams as they apply to warp speed, deflector shields, wormholes and time travel (The short answer is "No, but...," which is where it gets fascinating). The second, "Matter Matter Everywhere," covers transporter beams, warp drives, dilithium crystals, matter-antimatter engines, and the holodeck (see above short answer). The third, "The Invisible Universe, or Things That Go Bump in the Night," looks at the great unknown of the future where we may (or may not) encounter alien beings, multiple dimensions and other fun thinks from the Star Trek universe. There are nice diagrams to help the explanations along, filing in for Krauss' classroom chalkboard. Krauss also proves he is not alone in his major league nitpicking as he includes a Top Ten Physics Bloopers and Blunders from Star Trek that were selected by Noble Prize-winning physicists and other Trekkers.In his foreword Stephen Hawking points out what we have known since Jules Verne: "Today's science fiction is often tomorrow's science fact." I believe it was Jim Kirk who said things were only impossible until you did them. If I had read this book when I first watched the original Star Trek in syndication it might have kindled my interest in science to a level at least appropriate for polite social conversation. I can easily imagine what reading this book might do for somewhere who loves science; opening the minds of students to the possibilities behind the television show they enjoy watching.

Published by Thriftbooks.com User , 22 years ago
This books really surprised me.. I reread some parts several times to really grasp what he was saying because he delves into some pretty deep thinking and math based ideas. I highly recommend this to anyone who ever wondered how a transporter or warp drive could work and wanted a really good answer

Science can be fun (this from a high schooler)

Published by Thriftbooks.com User , 22 years ago
I loved this book. It explained things in two hundred pages that twelve years worth of science teachers have failed at, and I'm no Trekkie. I assume it is physics in relatively simple terms, given that I could understand most of it, but I feel like a scientist now (did you know that quarks come in three colors?). Its the same idea as A Brief History of Time but easier to understand. Recommended for any curious resident of our universe.
Copyright © 2022 Thriftbooks.com Terms of Use | Privacy Policy | Do Not Sell My Personal Information | Accessibility Statement
ThriftBooks® and the ThriftBooks® logo are registered trademarks of Thrift Books Global, LLC