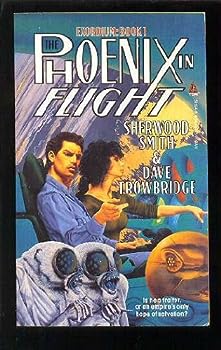 The Phoenix in Flight (Exordium, Book 1)

(Book #1 in the Exordium Series)

by Dave Trowbridge and Sherwood Smith

Brandon nyr-Arkad, the Emperor's scapegrace youngest son, defies protocol and evades a ceremonial duty, a defiance punishable by death. Original. This description may be from another edition of this product.

Published by Thriftbooks.com User , 19 years ago
If anyone thinks this series is not well written or thought out, they apparently did not read the books but only skimmed them. I have read all 5 books 4 or 5 times already, and will again I am sure. This is a must have series for any serious science fiction reader. I think most hard core sci fi devotees would love the writing. Some neo-sci fi readers may not enjoy it as much because it is very technical in places, very detailed in others. I will not delve into the storyline except to say there is intrigue, betrayal and surprise around every corner and with each turn of the page. Yes characters get killed. This is not a happy "up" series. It is very real and hits you hard with the emotions it evokes. I found myself caring greatly for all of the characters in the book, except for Eusabian of course. He is one evil person.I do agree it is very difficult to find all of the books in one place. I even wrote to Sherwood Smith at one point to find out if the final book was written a number of years back. (He answered my e-mail within a day or two by the way). A re-issue would be great. If more people could find it, more people would fall in love with the series.

Published by Thriftbooks.com User , 20 years ago
.... Well this is not young adult fiction but it's the best space opera I have ever read : funny, exciting, intelligent. The characterization is very good, and if characters are not exactly what they appear at first sight, there are quite enough clues for the carefull reader, and it's part of what makes the books so vivid and intelligent.The only problem with this series is how ridiculously difficult it is to get all 5 of these books. A reissue would be nice, a book 6 even nicer - book 5 wrapps up almost everything, but there is definite room for another sequel.

Published by Thriftbooks.com User , 24 years ago
Jerrode Eusabian of Dol'jhar has waited twenty years to complete his vengeance against Gelasaar hai-Arkad, the Panarch of the Thousand Suns. Eusabian's takeover goes according to plan until Gelasaar's wastrel third son, Brandon, commits the unthinkable, unforgivable sin of refusing to show up for his own coming-of-age ceremony, where Eusabian planned to have him killed. With both his brothers dead and Gelasaar captured, Brandon -- a drunken womanizer and naval academy washout -- becomes the Panarchy's last hope. Thus begins a vast and wonderful original space opera. Smith and Trowbridge have gone beyond the usual, thinly created, loosely imagined trappings of an interstellar society to create a fully realized political, social, economic and military system. It takes a little time to get into this series because of the complexity of the setting, but readers will be richly rewarded for their effort. The characters are deliciously complex, headed up by the implacable villain Eusabian, the unpredictable Prince Brandon, and the cold, inscrutable Rifter captain Vi'ya. The space battles are the best I have ever read, making great use of relativistic possibilities. The alien species of the Kelly, the Eya'a, and the Ur are more than humans-in-costume or afterthought set decoration, which was a pleasant surprise. The action is gripping, hair-raising, edge-of-your-seat as Brandon is harried across space, an unlikely hero in improbable company. More, it's laugh aloud *funny* in places -- something else that was a nice surprise. Kudos to Smith and Trowbridge. This is how space opera should be done.

Published by Thriftbooks.com User , 24 years ago
This series as a whole was wonderful. From an exotic and well thought out interstellar political system, to the spectacular space battles (THE most realistic in literature, with ships actually using the possibilities offered by realativity to the fullest, and AWESOME space marines!) While not a classic I certainly think it worth a read, if only for the wealth of original ideas.

Deep, but not one you can put down

Published by Thriftbooks.com User , 25 years ago
One great scene has our Heroes sneaking into the palace that the Enemy has conquered, being chased by blaster-armed guards and trapped in the kitchens, when the missing prince programs the mechanical waiters to throw acidy lime pies in the faces on the troopers whilst they escape. Oh, do you laugh. But keep a dictionary nearby, as some of the social-politcal happenings require lots of polysyllabic latin-rooted words. It's an interesting series on various levels - chase scenes, space battles, political manuverings, personality/class clashes, information technology theory. Just when the plot thickens, you find another plot forming beneath. My only problem is some minor plots are not developed well enough, or rather, left hanging in case they write a second series
Trustpilot
Copyright © 2022 Thriftbooks.com Terms of Use | Privacy Policy | Do Not Sell My Personal Information | Accessibility Statement
ThriftBooks® and the ThriftBooks® logo are registered trademarks of Thrift Books Global, LLC