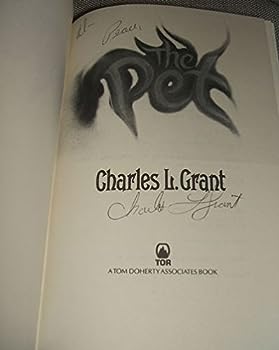 Teenagers are being slaughtered by the Howler, a serial killer who stops in small towns just long enough to kill, just long enough to tear apart a family and a community. When he strikes in Ashford, the town reacts-setting limits on teens' activities, monitoring who goes where-and parents become paranoid. Seventeen-year-old Don Boyd doesn't need the grief. He's already under siege-he's got family trouble, girl trouble, trouble with his high school...

Published by Thriftbooks.com User , 13 years ago
I am an avid horror reader, and horror novel, and short story writer, and this book is near the top of my list. I see most people say "has minimal gore" "best for 12 to 15". I am almost 19 years old, and I picked The Pet up one day at a yard sale I believe. I read it right away and I was hooked, the words that Grant uses, the way the story is wrote, and the build up. Granted most novels just jump right into the killing, the gore, etc. but Grant chose a different path with this one, which coincidentally is the main draw. He broke away from mainstream writing with this one. I can say that this is a book that still to this day, I pick up and read again and again. Probably would be suitable for people who understand horror novels, or your beginners. Also you do become attached to Don, the things he goes through, is what alot of people go through. So it is fairly easy to connect with the main character. Be ready for surprises, twists, and good reading. I see why Stephen King endorsed this book, its good reading, and its entertaining, and you wont want to put it down after the first sentence.

The pet by Charles L. Grant

Published by Thriftbooks.com User , 15 years ago
The main character in "the pet" is a severely lonely and miserable 17-year-old called Don Boyd. His parents are doing a poor job of getting over the death of his brother whom they obviously preferred over him. Their behaviour towards Don consequently alternates between extreme discipline and neglect. Both parents cheat on each other and frequently talk about divorce. He is not a super A achiever, neither in sport nor academics, which makes him the target of many cruel jokes at school. Don is placed under more pressure by the fact that his father, who is the headmaster of his school, is in disagreement with a teacher who consequently picks on Don to get back at his father. Don, who is exceptionally imaginative, deals with his problems by daydreaming about athletic stardom and, surprisingly, by making friends with the animals in the pictures in his bedroom. He becomes especially fond of the picture of a horse and tries to take strength from it to fight his numerous battles. One day Don notices that the horse in the picture has vanished, and its disappearance coincides with the most violent period in the town's history. Two children are murdered before the serial killer himself is killed while attempting to kill Don. The violence continues when a range of others, who just happen to be the one's involved in hurting Don, are brutally crushed or trampled to death. Don realises that the horse has somehow become real and that he has, as a result, found a way of getting back at those responsible for hurting him. Now the problem is just that Don does not want everyone who deliberately or accidentally hurt him to be killed, especially not his parents, and his favourite girl and best friend who are not entirely uninterested in each other. Can Don protect those around him by controlling this power that he has willed into the world? If you're looking for an action-packed horror novel with ghosts, vampires or werewolves chasing and killing, then "the pet" is probably not it. A lot of the book focuses on character development and relationships. The plot is built up gradually and the scarier elements only appear in the last few pages. Still, it is precisely the gradual built-up that makes it a difficult book to put down.

Sometimes confusing, but I like that in a horror novel

Published by Thriftbooks.com User , 16 years ago
I have just finished reading The Pet, and I have to say that while some of Grant's situations in this book were rather contrived and somewhat ridiculous, the book was a smashing success in slowly and "quietly" creeping me out and keeping my attention riveted. When a book captivates me so much that I can read 100 pages in just a two-hour plane ride, the author is certainly doing something right. This being my first book from Grant, I can't say how he develops characters in his other novels, but in The Pet, I liked the way that he selectively worked on character development, shallowly developing characters whose personalities and outlooks on life were shallow, deeply developing those who had more personal substance. Finally, one thing I noticed immediately upon beginning this book is that Grant very quickly switches from character to character when those characters are having conversations. While this can be a bit confusing, that's OK, because I like being somewhat confused when reading a horror novel, having to think my way through what exactly seems to be going on. All in all, I highly recommend this book and look forward to reading more Grant in the future.

Published by Thriftbooks.com User , 17 years ago
The opening paragraph: A cool night in late September, a Wednesday, and clear - the moon pocked with grey shadows, and a scattering of stars too bright to be masked by the lights scattered below; the chilled breath of a faint wind that gusted now and then, carrying echoes of nightsounds born in the trees, pushing dead leaves in the gutters, rolling acorns in the eaves, snapping hands and faces with a grim promise of winter.The second paragraph: A cool night in late September, a Wednesday, and dark.An astute reader might pick up on the fact that the first two paragraphs in this novel have subjects but no predicates. Also, that despite the disparity in size, both of the paragraphs are single sentences.This is not the way you are supposed to construct a novel. If you're a writer who truly understands his craft, though, you may know when to break convention; you may understand that the true purpose of writing is communication, and while communication is most often effective when following widely understood conventions, sometimes, just sometimes, the opposite is true.Mr. Grant's love of poetry, especially that of e.e. cummings, has been documented elsewhere. That same love of poetry shines in his writing, and allows him to evoke mood as well as any other horror writer, and far better than all but the best of them. The main drawback to his writing style is that it does not work well with the clinical violence inherent in many other novels. If you're looking for bodies stacked like cordwood behind a haunted house, look elsewhere. There are some authors who can make beautiful and frightening poetry out of violence: Joe Lansdale, David Schow, Nancy Collins, Jack Ketchum. Grant's specialty is making poetry out of dreams, or nightmares. There is some violence, but it's not lingered upon, merely offered in frames to add to the tension.Ironically, this is also one of the rare horror novels which takes care to follow the most basic structure of the classic novel: that the book should be a chronicle of development, that a key change must be made in a primary character or location as a result of the activities in the book. Read the book, consider Donald Boyd and the events which unfold around him, and when you get to the end, you'll be left with a few uncomfortable questions... which is the goal of all truly 'literate' horror.I cannot recommend this book highly enough, and I'm proud to be (originally) from the same state as the author.

One of the best ever produced in this vein.

Published by Thriftbooks.com User , 22 years ago
I'm not one for the online review, but when I saw the way this book had been misrepresented, I had to add a comment. Charles L. Grant's style of prose is poetic, and therefore not for everyone. Moreover, this book starts very slowly, building mood and establishing the setting. However, it is WELL worth the wait. Selected as one of the 100 best horror books of all time in the Jones & Newman edited _Horror : 100 best books_ (in which different professionals each selected their all time favorite, and reviewed it); nominated for a World Fantasy award for best novel... this is a entertaining, surprising novel, and one of the best by an author who has garnered more awards and nominations than Anne Rice _or_ Stephen King. No gore, no overt sexuality, but if you want that stuff written well, go read Graham Masterson or Nancy A. Collins.
Copyright © 2020 Thriftbooks.com Terms of Use | Privacy Policy | Do Not Sell My Personal Information | Accessibility Statement
ThriftBooks® and the ThriftBooks® logo are registered trademarks of Thrift Books Global, LLC