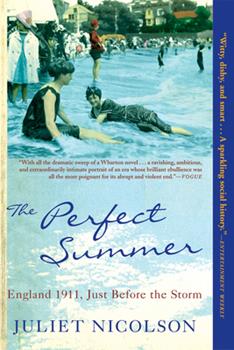 The Perfect Summer: England 1911, Just Before the Storm

The Perfect Summer chronicles a glorious English summer a century ago, when the world was on the cusp of irrevocable change. Through the tight lens of four months, Juliet Nicolson's rich storytelling gifts rivet us with the sights, colors, and feelings of a bygone era. That summer of 1911 a new king was crowned and the aristocracy was at play, bounding from one house party to the next. But perfection was not for all. Cracks in the social fabric were...

Published by Thriftbooks.com User , 14 years ago
It's hard to believe that some people have to have explained to them that the title is not to be taken literally. Maybe this type of book is too advanced for them. At any rate, the summer of 1911 was hardly perfect for anyone. A whole way of life was changing. While the book unfolds like one of the best PBS documentaries (and no doubt will be or has been made into one), domestic servants were becoming dissatisfied with their lives (meaning no lives for themselves), farmers and farm workers were leaving the land for the cities, factory, dock and transportation workers were going out on strike and forming unions, women were agitating for the vote, and the upper classes who still didn't get it were about to find out. Why 1911 and not 1914? Must have something to do with the ominous progress reports on the building and the sea trials of the Titanic (never actually named) but which shook up the world in 1912 before war was declared. Apart from that, with the dissatifaction of the working classes, England was fortunate it didn't end up with the situation that evolved in Russia. Winston Churchill cuts a less than heroic figure in this book, but his moment would come later. During this Perfect Summer, people were dying every day from the heat and the drought (no air conditioning), food poisoning (no refrigeration in most homes) and just plain poverty and starvation. Was London all that different from Dublin? Meanwhile, the super-rich, much like today, indulged in nonstop partying, drinking, gambling, drugs and extra-marital affairs. Servants were expected to turn a blind eye. A major point of the book is that the party was coming to an end, but I wonder. For the upper classes, the 1920s were just as decadent and the leader of the pack was the Prince of Wales, later the Duke of Windsor. The book is interesting, well researched and rich in detail of the period. But how much really changes?

Published by Thriftbooks.com User , 14 years ago
Reminiscent of THE LONG WEEK-END but more artfully constructed, THE PERFECT SUMMER gives us an age, compacted into the broiling summer of 1911 and reflected in hundreds of polished and cleverly interconnected vignettes. The crowning of a king, labor unrest, constitutional crisis and summer heat form the backdrop. The book's characters--high and low, familiar and obscure--make repeated entrances and exits. Winston Churchill, that contradiction made flesh and packaged in pink silk underwear, is always turning up. So too is the all-seeing butler, Eric--and the beautiful Diana Manners, deftly sketched in all her superficial complexity and lively insipidity. We catch a whiff of sweating, roiling humanity each time we turn a page. We watch the high-born as they endure boredom, the low-born as they simply endure, or not. Along the way we learn why the loo is so named, and we meet people who worry about exposure to moonrays and sit up nights waiting for pears to ripen. How Juliet Nicolson has managed to maintain absolute control over such a mass of detail, with apparent effortlessness, and make of it a perfect and powerful unity--that's a question to be pursued at second reading. To use the lingo of the times, this book is utterly utterly. Don't miss it!

Published by Thriftbooks.com User , 14 years ago
Social commentary? I think not! The royal family and aristocrats in the England of 1911 were the famous celebrities of the day. People of all classes followed the daily ups and downs of the royal family just as we follow our celebrities in New York and Los Angeles. If you look at Nicolson's sources, they are diaries, newspaper articles, letters, and memoirs, and these sources focus on self-aggrandizement, hearsay, self-defense, and that old black magic called love. Bettering oneself by marrying well was also a strong theme. Fashion and entertainment were discussed in the print media of the day, and everyone followed the lead of the most exciting of the young celebrities. The debutantes and their escorts were stars of early 20th century England. In short, this book is a thorough account of the gossip of the summer of 1911 including he background we need to appreciate the importance of the gossip. I do not intend the label of gossip to in anyway denigrate the superb book that Juliet Nicolson has created. As a fan of Edwardian England, I am familiar with much that Nicolson relates in the book. The fascination for me, however, is to compare how similar people living 100 years ago are to those of us living today. Conventions may seem very different, but on inspection we see that the need to know about the activities of our neighbors, and to speculate on our neighbors' motivations, is still the same. Today, in a modern era with numerous and instant means of communication, the general public (mostly commoners in Edwardian England) still have the same fascination with the rich and famous. The rich and famous, while disdaining those they consider below them, still need the adoring public as their audience to affirm their brilliance. I love gossip even when it is very old!

Published by Thriftbooks.com User , 14 years ago
about a very interesting summer. The Summer of 1914 has been explored in many books, most notably by Barbara Tuchman, but here, Ms Nicolson writes about a very important season a few years earlier. The weather was hot, the new King and Queen were being coronated, and society was in a gentle upheaval. Edward VII's death the previous year truly ended the Victorian age and all sorts of "new things" were being done by members of all levels of society. Nicolson writes easily about the time and the people. One incident she writes about made me chuckle. On page 167 she mentions Hwfa Williams being shot and wounded "in the Mall by 'an overworked telegraph clerk whose brain had given way under strain'". "Overworked telegraph clerks" then, "overworked postal workers" now. Things haven't changed so much from then til now!

Published by Thriftbooks.com User , 15 years ago
Juliet Nicolson is following in the footsteps of her father Nigel and her grandparents Harold and Vita (Sackville-West) Nicolson by producing history which reads like fine literature. The Perfect Summer is the story of the summer months of 1911, a year which in retrospect for England was indeed the calm before the storm of World War I. Because 1911 was a Coronation Year much of The Perfect Summer focusses on the lives and doings of England's upper classes, from King George V and Queen Mary through Society luminaries like the Marchioness of Ripon and politicians like Winston Churchill. There is more to The Perfect Summer than gossip about the elite, however. The summer months of 1911 were filled with tension as the Liberal Government struggled to reform the House of Lords, the British and Germans clashed in Morocco, and strikes spread across the country. In addition, most of the summer was brutally hot and dry. All of this is well and thoroughly discussed with plenty of references from newspapers and magazines of the period to add immediacy. The Perfect Summer will join Barbara Tuchman's The Proud Tower as an essential resource to help us better understand the world which came to an end forever just three summers later.
Trustpilot
Copyright © 2022 Thriftbooks.com Terms of Use | Privacy Policy | Do Not Sell My Personal Information | Accessibility Statement
ThriftBooks® and the ThriftBooks® logo are registered trademarks of Thrift Books Global, LLC