The Perfect Storm: A True Story of Men Against the Sea

It was the storm of the century, boasting waves over one hundred feet high--a tempest created by so rare a combination of factors that meteorologists deemed it the perfect storm. In a book that has... This description may be from another edition of this product.

A Lost Ship Grips You in Pounding Waves of Drama

Published by Thriftbooks.com User , 18 years ago
This book takes a natural disaster, a storm of the century, and builds it into a compelling clash of man against nature with man having little or no chance. "We Are Playthings of the Gods" kept running through my mind as I read this book. I am glad that a movie has been made from the book, because the book was clearly designed to be turned into a script. The material is incredibly visible and visceral at the same time. Even if you have never left dry land, you will soon have a good sense of what it meant to be a swordfisherman on the Andrea Gail when the storm came up. Since the ship was lost, the author had a difficult task -- to give us a sense of what happened without turning the book into a dry dissertation. The book is incredibly successful at turning the informed speculation into a story line of what might have happened. If anything, the lack of details allows you to use your imagination, which makes the story richer. Some will complain about the extensive background about Gloucester, the fishing fleets, boats, technology, and the people involved. For me, each element added a richness to the drama that made the story all that more gripping. Like a good Tom Clancy novel, the detail adds a texture and a context for the book that makes it all the more significant in your mind. The book has an unusual structure. It cuts in and out from the present to the past, and from present to past tense and back again. At one level, it operates like mental language. That technique gives the book an emotional immediacy that makes it have much more impact on the reader. Let it weave its magic, and you'll really enjoy yourself. Buy this book today, and save it to read the next time a howling wind and driving rain assault you on a dark night. Have a great read!

Published by Thriftbooks.com User , 18 years ago
One great writer in this world who wrote "The Perfect Storm" is Sebastian Junger. The them of his book was a story about the hurricane that had the East Coast killing hundreds of people. The backround is that men and women would usually join the fishing business because you could get a pretty big paycheck in a small amount of time (a month). While many were returning home, a hurricane rose up and hit the East Coast. The hundred foot waves and driving winds killed a large amount of men and women, including the people that were even on land.People usually joined the fishing business because you could get at least 3,000 dollars in at least one month. While hundreds of people were out fishing during October in 1991, a severe hurricane struck. Because of the way that the hurricane worked, many meteorologists called it the "perfect storm". The people that were fishing near or going to the East Coast got caught in the storm, and most of them were killed.The book is pretty interesting. It tells the history about fishing. Like what kind of technology was used hundreds of years before, and how it's different from the technology that we use today. It also describes many things, like how it feels like to drown, and what happens to the body when it's drowning. The book makes the storm memorable because it tells how people were dying on hte ocean and told how hundreds of people drowned in the waves.The book affected me in small ways. For instance when some people died, I felt bad for them because I knew they weren't just characters that were made up, they were real people. At first when I watched the movie "The Perfect Storm", I thought that it was interesting and then just forgot about it, brushing it off as not important. Then I read the book and saw how the people felt while they were caught in the storm, getting rescued, or waiting to see if a loved one would come home or not. So in some parts, it also made me kind of sad because so many people were killed during the storm and like I said before, they were real people.I would recommend this to people who like a little drama, a little history, and someone who wants to learn a little about life on the ocean.

Published by Thriftbooks.com User , 22 years ago
As a published nonfiction author, I'm giving 5 stars to this highly publicized docudrama adventure - an emotional ride through "meteorological hell" on a 72-foot swordfish boat dragging 40 miles of fishing line through 100-foot waves in the "perfect" storm (a nor'easter that "could not possibly have been worse").This true story delivers the powerful synergy of a combination of elements in perfect balance: high-seas drama that slams your emotions like the rogue wave that explodes windows in the wheelhouse...fresh imagery that draws you in and puts you helplessly amid the crashing waves and hurricane winds on the boat...and fascinating facts about storms, wave dynamics, fishing techniques, and much more.Author Sebastian Junger, a journalist by trade, combines these various elements in a well-crafted story of lives affected forever by a series of decisions by 6 fishermen in the town of Gloucester, Maine. "The Perfect Storm," in a nutshell, is the story of a freak conjunction of weather systems that produced the most powerful storm of the 20th century off the coast of northern New England in October, 1991. Caught in this maelstrom is a swordfishing fleet, in particular the Andrea Gail and its 6-man crew. Building up to the frightening climax is the story of a fishing town, its people and culture, and the perils of daily life on board commercial fishing boats (generally acknowledged as the most dangerous profession). Yet it is also a story of how personal assumptions and decisions determine who will live to fish another day.Unlike the trite, cardboard characters of many a fiction adventure, the real men and women who experienced this almost inconceivable storm come alive through Junger's careful and respectful representation of the facts. We get to know the tightly bonded folks at the Crow's Nest bar, where fishermen sometimes spend thousands of dollars of hard-earned wages in one night buying drinks for their friends. We get inside the lives of fishermen and their families, lives that would soon be forced to change in ways they always dreaded but never thought would happen to them. And we discover the misgivings and premonitions of crew members when the time came to load the Andrea Gail and head for one last run, ominously late in the season - warnings to which some listened, but others didn't.As the story unfolds, we learn more than we ever thought we wanted to know about meteorology...dynamics of waves traveling across thousands of miles of ocean ("forty-five-foot breaking waves are much more destructive than rolling swells twice that size")...the rare monster rogue wave ("avalanches over the decks and buries the Andrea Gail under tons of water")...hard-learned techniques for finding and catching swordfish (a hook "can whiplash over the rail and snag people in all kinds of horrible ways" and "if it catches some part of the baiter's body or clothing, he goes over the side with it")...the economics of a

Published by Thriftbooks.com User , 22 years ago
I usually don't read this type of book. With that said, let me also say that I picked up this book and didn't put it down until I finished the last word. This is not a fictionalized account of what the last moments on the Andrea Gail were like during that horrible 1991 storm. Don't read this expecting huge dramatic moments, overblown sensationalized heroics or a tragic love story. Granted, heroism, romance and drama are certainly involved in this tragic tale of real people facing real events. But what Junger manages to do is educate those of us who are bound to the land about the rigors, dangers and pleasures of those who work in the fishing industry. He weaves in some history of the industry, the fishing waters and of the crew of the A.G. themselves. He also provides some very detailed meteorological information along with specifics about marine behavior and tidal patterns. While reading this book, I would often close my eyes and try to imagine what it would be like to stand onboard facing a sheer wall of deadly water. Or to make the decision to risk my life to save someone else. The disapperance of the Andrea Gail is the focal point of the novel, but Junger also writes about the various rescue efforts taking place at sea during the worst storm in recorded history. Many people lost their lives, many others barely escaped death. This book brings all that to life. I give this book 5 stars because it is very rare for a true-to-life account to touch me and hold my attention for so long. Knowing the grim outcome of these events did not diminish the book's impact.

Published by Thriftbooks.com User , 22 years ago
I'll admit, I had doubts. I was expecting an exciting, fictionalized version of the actual facts. I was disappointed at first, because the book is written more like a history textbook in present tense. "Billy keeps talking with the other captains, studying surface temperature charts . . . " But after I forced my way past the first couple of chapters, I was hooked. I learned more than I ever wanted to know about fishermen, but that certainly made the crew of the Andrea Gail human to me, and I felt a teeny portion of what those men must have gone through in their last moments. I also have a brand new appreciation for the Coast Guard and the Air Nat'l Guard. My husband is one of those USCG men who spends months on his patrol boat in bad weather to rescue those who find themselves in trouble--whether out of stupidity or bad luck. I now understand his job a little better, and I wouldn't trade places with him for the world. Sebastian Junger does an excellent job leading us into the world of the rescuer, the fishermen, and even the National Weather Service. Some of the bits of historical description can be a bit long-winded and jarring as they shake you out of the story, but they're still interesting. An excellent book that'll make you glad that SOMEONE ELSE is catching your fish and rescuing people. Just don't expect a typical novel-ish style of writing. This is different, but once you get used to it, you might find that the book is hard to put down.

The Perfect Storm: A True Story of Men Against the Sea Mentions in Our Blog 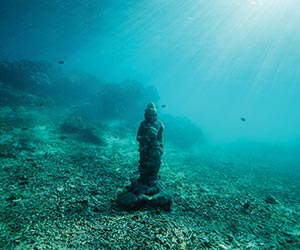 Celebrate World Oceans Day by showing them some aquatic love!