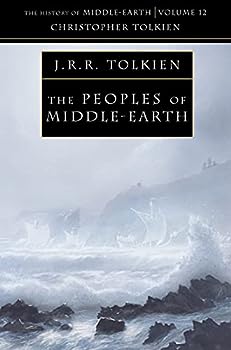 (Book #12 in the The History of Middle-Earth Series)

Throughout this vast and intricate mythology, says Publishers Weekly, "one marvels anew at the depth, breadth, and persistence of J.R.R. Tolkien's labor. No one sympathetic to his aims, the invention... This description may be from another edition of this product.

At long last, the tale of Middle-Earth is brought to a close

Published by Thriftbooks.com User , 20 years ago
But is this the end -- or only the beginning? This book, the 12th in "The History of Middle-Earth" series, wraps up the final loose ends of Christopher Tolkien's 25 year labor. Unlike many of the other titles in this series, "The Peoples of Middle-Earth" does not concentrate on a single "Age" or storyline. Instead, it attempts to answer remaining questions, correct errors and misimpressions, and provide extra bits of information about the lives and histories of the many peoples populating Middle-Earth. Of special interest are the two fragments of unfinished stories: one, dealing with the coming of the Numenorean ships to the shores of Middle-Earth (told from the perspective of the men living in desperation under the tyranny of the Dark Lord), two, dealing with the return of evil in Gondor, some 100+ years after the downfall of the Lord of the Rings. This hobbit wishes that these two stories had been finished. This book is a delight for all lovers of Middle-Earth -- Elves, Dwarves, Men and Hobbits will all find something of interest. Highly Recommended.

This isn't the end, it's the beginning

Published by Thriftbooks.com User , 21 years ago
Christopher Tolkien takes the reader back to the years 1950-1952 when his father was preparing the appendices and prologue for The Lord of the Rings. So much that had been written for publication was lost because the book was so big it simply couldn't all be used. So the appendices we have today were created by condensing the material originally intended for publication.What we learn from the lengthy source material is that Tolkien really did anticipate many fannish questions and tried to answer them. A great deal of information concerning Hobbits, Elves, and the Edain (and Dunedain) was to be included. The essay "Of Dwarves and Men" also provides a fantastic study of early Second Age culture in the lands beyond the Misty Mountains. Unfinished Tales had led us to believe there was nothing more to be learned about the Second Age, but at the end of the History of Middle-earth series Christopher Tolkien unloaded a bombshell.Peoples of Middle-earth also includes the previously unpublished opening pages for The New Shadow, the sequel J.R.R. Tolkien almost wrote to The Lord of the Rings. It begins after Aragorn has died and hints at a dark plot to overthrow King Eldarion. Sadly, Tolkien felt no passion for the story, which he deemed would be no better than a thriller. So he abandoned it just as the first taint of evil arose.Tolkien researchers will also find that "The Shibboleth of Feanor" sets out the final and complete genealogy for Finwe's descendants, and several accompanying essays explain minor details alluded to throughout the History of Middle-earth books.

Herein lies the conclusion of the matter. . .

Published by Thriftbooks.com User , 21 years ago
In this volume, Christopher Tolkien brings his quarter-century labor of love to a close -- and what an ending it is. All of these books (The History of Middle-Earth series) have provided Tolkien fans with tantalizing bits of information, glimpses into new characters and new perspectives, and bits and pieces of other story-lines. This book continues that trend -- and provides us with the opening (and only) pages of "The New Shadow", Tolkien's begun but abandoned sequel to "The Lord of the Rings".Thank you, Professor (Christopher) Tolkien for making these books, stories, essays, and notes available. And thank YOU, Professor (JRR) Tolkien for sharing with the world, your world of Middle-Earth.May your soul, through the mercy of God, rest in peace. Amen.

The last in a great series

Published by Thriftbooks.com User , 23 years ago
In the twelfth and FINAL volume of The History of Middle Earth Christopher Tolkien answers many of the questions bothering Tolkien fans for a long time. The family trees of Hobbits, the names and activities of all the Dwarf houses, the language ability of the elves, the origin of Lembas, and other mysteries are finally revealed. Also included are two very interesting pieces. One is "The New Shadow", the beginning of a sequel to LOTR, and the other is "Tal-Elmar", a story telling of the coming of the Numenorean ships as sees by the men of Middle Earth. I recommend this for all Tolkien fans, and for those who have read the other HoME volumes, you don't want to miss this last, and best, edition. Finally, a thank you to Christopher Tolkien for allowing us one of the greatest literary experiences of our lives--we are forever in your debt.

All the questions you need answered about Tolkien's world...

Published by Thriftbooks.com User , 24 years ago
For years J.R.R. Tolkien's fans have wondered and speculated endlessly about whether Moria was retaken, who the Princes of Dol Amroth were, whether Cirdan's real name was "Cirdan", how the Dwarves ate if they spent their time digging and working mines, etc., etc., etc. The great mysteries are solved, and we learn for the first time just how extensive the Appendices to THE LORD OF THE RINGS were originally intended to be. Tolkien had to cut much of the material he had written, and only now, more than forty years later, we can officially declare the canon expanded. Of course there are the usual glimpses into other works -- arcane essays about the names of Finwe's descendants, a bit of history about the Dwarves (all seven Houses are named), some clues about the relationship of the Dunlendings and Breemen to the Dunedain, and how long the Hobbits actually lived beside men in the Vales of Anduin. And added treat is the full text of the abandoned sequel to THE LORD OF THE RINGS -- THE NEW SHADOW. Although many fans have eschewed THE HISTORY OF MIDDLE-EARTH books as too redundant, too boring, too expensive, this is the one volume that anyone who has read through the Appendices and wondered, "Is that all?", must have.
Trustpilot
Copyright © 2022 Thriftbooks.com Terms of Use | Privacy Policy | Do Not Sell My Personal Information | Accessibility Statement
ThriftBooks® and the ThriftBooks® logo are registered trademarks of Thrift Books Global, LLC