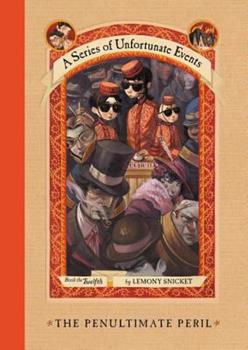 A Series of Unfortunate Events #12: The Penultimate Peril

(Book #12 in the A Series of Unfortunate Events Series)

Lemony Snicket returns with the last book before the last book of his bestselling Series of Unfortunate Events. Scream and run away before the secrets of the series are revealed Very little is known about Lemony Snicket and A Series of Unfortunate Events. What we do know is contained in the following brief list: o The books have inexplicably sold millions and millions of copies worldwide o People in more than 40 countries are consumed by consuming...

Published by Kelsieb101 , 3 years ago
I first read this series when I was a kid and again as an adult, I love it even more now, I love it so much I read it to my little brothers and sister and got them obsessed too!

Published by Thriftbooks.com User , 17 years ago
I was pleased to find, despite some of the horrid reviews I read, that the Penultimate book of this series was quite interesting and just as good as the other 11 books. Although I found humorous bits few and far apart at first, it got funnier as the book progressed, as well as getting more intense. I particularly enjoyed the description of the hotel, both inside and out, and upside down... I also liked the section towards the end where they take literally the expression "justice should be blind." These are some of the reasons that the books are pure genius; Lemony Snicket expertly mixes comedy and tradgedy into a story you'll have a hard time forgetting. Although the end was ruined for me, it was still quite a shocker, particularly Sunny's words at the end of chapter 12 (I think it was). The only complaint I have was that the Baudelaires did not get to use their skills very much throughout the book, but I suppose this was part of their disguise. The hotel guests also got rather annoying, with people shouting random things every which way. The whole series is rather random, though, so no complaints... Despite what you have heard about this book, I suggest you read it. It was an excellent addition to the series, and I'm sure Mr. Handler will not dissapoint us when the final installment comes in.

Published by Thriftbooks.com User , 17 years ago
Book eleven in A Series of Unfortuante Events, THE GRIM GROTTO, didn't live up to my high expectations. Actually, it was one of my least favorite books I had ever read. I prayed to God that the twelth installment wouldn't be a stinker, and thank goodness, it wasn't. Infact, THE PENULTIMATE PERIL is now my number one favorite in Lemony Snicket's thirteen-book series. There was just so much to like about it, but there was one main reason that made me appreciate it over all the others. Every ASOUE book tends to be a little more mature than your average children's book, but this one is a hundred times more intense than each of the others. Like the Baudelaires realize midway through the story, they are no longer children (except for Sunny) proving that the events of their lives are no longer kid stuff. If you thought book six of Harry Potter was intense, wait till you try reading THE PENULTIMATE PERIL... Right from the first chapter of this brilliantly-written novel, the Baudelaires know that the things they're about to face are like no other. A fellow V.F.D. member has them disguised as hotel conceirges at Hotel Denouement, where they will pretend to be your average "hotel helper" while secretly being on the look-out for any villains that might try to cause chaos to the upcoming V.F.D. meeting. I thought that making the setting a hotel was a great idea, as one of the most interesting places in the world is a hotel. This led up for some hilarious scenes involving some of ASOUE's best characters, although it also led for some extremely depressing scenes that may fill your eyes with tears. After all, there's a reason why Lemony Snicket warns you not to read this book and pick up something much more delightful. Another detail about this book I really enjoyed was that so mo many characters from the previous installments in the series showed up. Best of all, none of them were underused or overused. They were placed perfectly in the story so you'll say to yourself "Wow, I can't believe they're back!" It's a huge disappointment when a series author forgets their series' past, but Lemony Snicket / Daniel Handler certainly doesn't. No important character in the series goes unforgotten in this book, and although having tons of characters return would be more fitting for the last book, I'm glad Snicket / Handler did it with this one--after all, he has a lot of plot to get out of the way and unsolved mysteries to answer with book thirteen. This leaves me to the only problem I had. There weren't enough questions answered, but I trust that book thirteen will answer everything, so it's not much of a disappointment. If you think A Series of Unfortunate Events is a lame kiddie series that definitely don't show true angst, you better take a look at this one. From beginning to end, THE PENULTIMATE PERIL is filled with more drama than you can even imagine. The ending is the most dramatic the whole book (and it's the most intense ending in the series) and will most lik

The End Is Near

Published by Thriftbooks.com User , 17 years ago
The Penultimate Peril is one of the best in ASoUE. It's the next to last book in the series, and everything is starting to come together. When we last left Violet, Klaus, and Sunny that had met up with Kit Snicket on Briny Beach, and that's exactly where out story picks up. She takes them to a hotel, where in just a few days, there will be a gathering of volunteers at the last safe place. However, we all know that nothing ends in sunshine & happiness for our favorite unfortunate orphans. The book is very well paced, and a bit darker than some of the others in the series, but just as silly as well. We see lots of familiar faces, and will have you wanting to reread the entire series over just to see if you missed the slighest bit of a clue. We also meet some new characters, and discover some remarkable secrets. We also run into some new questions, and ponder the true meaning of noble. Right & wrong are not always black & white, especially for the Baudelaires. The Penultimate Peril is a very enjoyable read, and is a must buy for fans of ASoUE. And make sure you have a mirror when you read.

Published by Thriftbooks.com User , 17 years ago
There aren't many books that leave you feeling your life can never again be the same as before you read them, and if you've read the first eleven books of the series, wonderful though they all are, you probably won't expect Book the Twelfth to be one of them. You'd be wrong. From the very beginning, the Baudelaires are thrown into an ambiguous world where everyone speaks in enigmas, volunteers have villainous identical brothers, and even the simplest action is likely to be part of a dark and convoluted plot. Unable to tell who is to be trusted and who isn't, they wonder endlessly about whether their actions are helping their friends or their enemies, and end up having to take some big decisions that may or may not have a right answer. All this is set in the brilliantly imagined Hotel Denouement, and if you know what the word "denouement" means then you would be right in expecting matters to come to a climax here. Finally, many of our niggling questions are answered, but many remain, and the book is filled with a sense of unfathomable mystery. Without revealing too much, I will say that the Baudelaires end up discovering some very shocking facts about their parents, about the world they live in, and about themselves, and suddenly nothing seems as simple or as clear-cut as we first imagined. The hotel, a backwards place whose reflection in a pond is the *real* Hotel Denouement, could be a metaphor for the world. You won't find it possible to look at life in the same way again.
Trustpilot
Copyright © 2022 Thriftbooks.com Terms of Use | Privacy Policy | Do Not Sell My Personal Information | Cookie Preferences | Accessibility Statement
ThriftBooks® and the ThriftBooks® logo are registered trademarks of Thrift Books Global, LLC