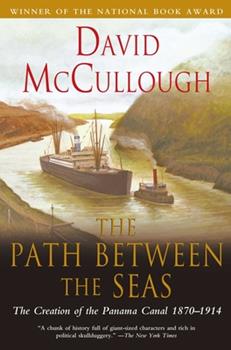 Published by Thriftbooks.com User , 20 years ago
I hold a personal interest in the Canal as I have just visited it and am a direct descendant of Col. David Gaillard one of the American engineers of the Canal, and all everyone in Panama told me was to read Mr. McCullough's account of its creation. As a history major in school, I read many great and many bland histories; this book ranks in as one of the most captivating books I have read, fiction or non-fiction. Even if one does not have any previous interest in the Canal, after the first pages you will become hooked. McCullough writes with such elegant prose and interesting humor, that the story unfolds like a Victorian novel. From the incredible cast of characters (from Ferdinand de Lessups to Teddy Roosevelt), the intrigue, the conspiracies, the romance, the quest for one of Man's greatest achievements explodes into an incredible book that will keep the reader thinking about the Canal for years to come...and will compel the same reader to venture to this tropical country and view the incredible "8th Wonder of the World" himself.

A Most Profound WorK!!

Published by Thriftbooks.com User , 22 years ago
I found Mr. McCullough's book about the building of the Panama Canal to be well written, extra-well researched, and highly entertaining! I would recommend this book to anyone who truly wants to know what it took to build such an engineering marvel. Having lived in Panama twice and visited on many occasions, I can attest to the fact Mr. McCullough's book is THE SOURCE for accurate information on the canal and it's builders (both French and American efforts). I would also recommend purchasing the NOVA video, which Mr. McCullough narrates, called "A Man, A Plan, A Canal, Panama". He even quotes out of his own book on screen! I've never read a book so intricately and fastidiously researched. MUST READING for the true Canal enthusiast.

Published by Thriftbooks.com User , 22 years ago
David McCollough is a heck of a writer -- a fact I already knew from reading his wonderful biography Truman. His skill does justice to an epic story of recent times: the building of the Panama Canal. This big book is necessary to tell a big tale. The effort to build the Path Between the Seas across the isthmus of Panama lasted from the 1870's through 1914. In a nutshell, first the French tried and failed to build a sea level crossing at Panama. This was in pursuit of a vision held by many national leaders in order to cut thousands of miles from the journey from the Atlantic to the Pacific oceans. The Americans picked up where the French left off, and after a decade succeeded in creating a crossing using locks and a man-made lake. What McCollough does so well is flesh out the above nutshell. It is a tale that would not be believed if written as fiction. The level of incompetence, misfeasance and malfeasance, wondrously peculiar personalities, engineering failures and brilliance, vision and size astound the reader and underscore how that age relied more upon enthusiasm, idealism and optimism in the pursuit of grand efforts than does our careful and measured era. The French followed the builder of the Suez Canal into the jungles of Panama. Tens of thousands of French families invested their life savings in the stock of a company that had no plans for the actual canal, very little good data of conditions on the isthmus, no idea of the amount of earth required to be removed, and no budget that would pay for the grand adventure. After spending the 1870's and 1880's mired in the jungle, losing tens of thousands (mostly black Caribbean workers -- the people who really built the canal) to disease and accident, raising increasingly more expensive capital in desperate gambles to stay afloat, the French effort collapsed. Shame, ignominy and jail awaited some of the project leaders. Their effort will amaze the reader -- that such an ill-conceived (that's too much of a compliment it wasn't even conceived at all beyond "we'll dig it -- viva la France!") undertaking could consume much of the savings of middle class France reminds one of how susceptible people can be to charlatans and swindlers. Into the breach stepped Teddy Roosevelt. This story once again displays the Presidents immense force of personality, drive and integrity. Evidence strongly suggests he made a revolution in Panama to win that then Colombian province away from a country that could not come to terms with the United States on acquiring the rights to dig the canal. He then ensured, through the use of highly skilled and able administrators, that the organization, logistics, financing and authority existed to make what for years stood as the world's largest construction effort. Great credit for the actual building goes to several engineers and their staff -- many US Army engineers. The success also greatly rested on Col. Gorgas and his partially successful efforts to battle disease: yellow feve

History writing at its best

Published by Thriftbooks.com User , 22 years ago
David McCullough makes the epic story of the building of the Panama Canal come to life in a way that few authors could. Throughout the long history of tranportation across the Central American isthmus (first railroad, then canal) McCollough focusses on fascinating characters like the brilliant but enigmatic Frechman Ferdinand de Lesseps, who built the Suez Canal but whose career crashed and burned in Panama. McCullough's skill as a storyteller simply cannot be understated. The book will leave you with a true appreciation of just how Herculean an undertaking the canal was. This book is simply one of the best works of history to appear in the last quarter century.
Trustpilot
Copyright © 2022 Thriftbooks.com Terms of Use | Privacy Policy | Do Not Sell or Share My Personal Information | Accessibility Statement
ThriftBooks® and the ThriftBooks® logo are registered trademarks of Thrift Books Global, LLC