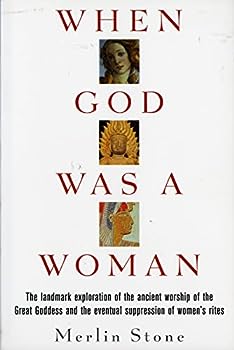 When God Was a Woman

The landmark exploration of the ancient worship of the Great Goddess and the eventual supression of women's rites.In the beginning, God was a woman...How did the shift from matriarchy to patriarchy... This description may be from another edition of this product.

Published by Thriftbooks.com User , 18 years ago
The history of our society, our religions, and our gender roles is vital to understanding ourselves and our world. Things are not the way we have been told they were. The truth may well shock and anger you.We are becoming used to conspiracy theories and revisionist history surfacing in an almost constant stream these days. Much real history has been destroyed or distorted, and much we simply never knew. Spin doctors throw an immense amount of PR garbage in our faces to try and manipulate us into their camps. It is difficult to know whom to trust, particularly regarding emotionally loaded issues like religion and sex.Merlin Stone has written a very good book about the history of gender roles in Western society and the part religion plays in forming these roles. She also gives us insight into the nature of laws regarding sexual behavior and marriage, a subject of considerable interest right at the moment.The book is very well documented with quotes attributed and citations listed in the bibliography. While the subject of populations in remote historical times can be quite dry when treated in detail, Stone manages to mantain a high degree of academic depth while remaing very readable and accessible.The book is well organized and leads one through the evidence to her very rational conclusions. She draws on vast amounts of archelogical and historical data, and her arguments are convincing. The information in this book correlates well with information I have seen from other sources in my investigation of why religions and governments put so much time, money, and energy into criminalizing sexual behavior.The basic theme of the book is that gender roles, the nature of sexual expression, and the rights of women changed drastically when the Aryan-driven patriarchal religions took over in the Middle East. While we have been told that this was an inevitable "progression" as we moved to a "modern" society, the truth is that it was more a matter of physically superior forces destroying any opposing points of view. The changes studied here were not the progress of people thoughtfully moving to new ideals, but of vanquished peoples crushed by violent and greedy religious fervor. The evidence, even from the religious sources themselves, is undeniable. The bias in favor of the triumphant religious structure is shown to still exist today and to reach even into the halls of Science, which exists supposedly to free us from superstitious nonsense.This is not a book about male-bashing, nor does it promote a particular feminist stance. Stone is not as strident as I sound in this review, but very logical and even-tempered. The conclusions and information in this book shed light on oppression and global violence that effect us all; male, female, or otherwise. When you see that sexual laws and supposed "morals" are actually twisted excuses for oppression and control, it might open your eyes to a new understanding of the debates about sex and marriage happening as I write t

Published by Thriftbooks.com User , 20 years ago
This is a really good book. ... having read quite a bit of other stuff on proto-Jewish, pre-monotheistic religions, I confirm that the author does stick to pretty well-known facts. She bases her arguement primarily on a few (pretty-well established) facts, namely: - that (visibly female) goddess images are *the* oldest religious imagery to have been discovered, - that animistic religions with large local pantheons abounded for most of human history, - that the Jewish pentatuch was written in the context of other contemporary religions, and - that it is an easy jump to believe that prior to the advent of animal domestication/husbandry the relationship between men and pregnancy was probably not well understood/known.She uses these main pieces of evidence as well as scholorship on pre-historic religions to build a (very convincing) argument that once upon a time when people thought women possessed some magic ability that allowed them to reproduce alone (via parthenogenesis and sans l'homme), femaleness was worshipped. So, people had no clue where babies came from, men were seen as pretty much useless and inheritance was a purely matrilineal affaire. Then, ta da, a big bad monotheistic religion (proto-judaism) came along and said "Forget this stuff about men being useless! No,in fact, the Man is the creator of ALL!And what's more, the woman is born of the man -- contrary to all appearances. And we've got proof, just read this book we wrote called Genesis!"So, her book is about this; how did we get to this impasse? How did men manage to turn the common sense of the preceding millenea on its head? And how has this situation managed to persist for thousands of years (3 thousand to be exact)? Where did monotheism come from? Where did the notion of male gods come from, for that matter? Were there some groups worshiping male gods and others worshiping female gods which existed concurrently? How did a major female figure of divinity manage to acquire, first, a son, then a consort, then a husband/father? And after she acquired all of these celestial relatives, how did they manage to metaphysically dominate and eventually eclipse her entirely -- making feminity utterly un-associable with divinity until well into the 10TH century (with the cult of Mary)?So, those sound like pretty good questions, huh? I have read quite a bit on religions, but I would say that this is one of those rare books, where you don't actually have to know anything about the subject to be able to be consistently engaged by the authors reasoning. If you really think the author is totally off the wall, as far as historical facts, then read some other stuff too. But as an arguement, this book is up there with any plausible historical theory.
Trustpilot
Copyright © 2022 Thriftbooks.com Terms of Use | Privacy Policy | Do Not Sell or Share My Personal Information | Accessibility Statement
ThriftBooks® and the ThriftBooks® logo are registered trademarks of Thrift Books Global, LLC