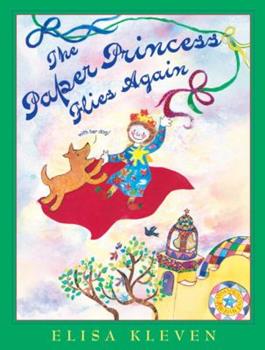 The Paper Princess Flies Again: With Her Dog!

(Part of the The Paper Princess Series)

While looking for a birthday gift for their owner, the paper princess and her dog travel on a kite, a tumbleweed, and a sailboat, and end up in a surprising place.

Published by Thriftbooks.com User , 15 years ago
The Paper Princess loves a little girl named Lucy who is good to the princess and her dog. When they find out that there is to be a fiesta later in the day, they set out to do something nice for Lucy. As the princess and her dog fly on the wind in search of the perfect gift, they encounter many adventures and only by a stroke of good fortune are returned to their little girl. Though they weren't able to bring her much in the way of a physical gift, the princess and her dog gave Lucy what she loves best of all: their adventure story. The Paper Princess Flies Again (with Her Dog) is a precious, whimsical story. The colorful and lively illustrations blend seamlessly with the text to produce a wonderful tale. I also enjoyed that this story is set outside of the American cultural norm. This is not the first of the Paper Princess tales, but that fact doesn't detract from the story. It only leaves me and my children hoping to pick up the other Paper Princess titles. Armchair Interviews says: A delightful, entertaining read.

Published by Thriftbooks.com User , 15 years ago
Elisa Kleven explains on the back flap of "The Paper Princess Flies Again (with her Dog!)" than when she finished reading "The Paper Princess Finds Her way" to a group of children they asked her what would happened next to the princess and her new paper dog. She wrote and illustrated this third story in the series to find out and to "inspire children to draw their own paper characters and to give those characters stories and worlds." After reading this book I have little doubt that Kleven has succeeded in her objective. This enchanting story is set in Mexico, where a girl named Lucy loves a paper princess who is not thicker than a leaf but who is full of stories. Although the paper princess has traveled far from the girl who first drew her and the boy who gave her wings, she now has a dress like the sky and a dog. Lucy agrees he is a good dog, but since he looks a little plain she decides to paint him a colorful jacket. The dog does not think he needs a jacket given his warm brown coat, but then Lucy explains he needs it because they are going to have a fiesta that night. In appreciation for the coming party, the princess and her dog decide they should find something nice for Lucy. But when they find a red paper flag that they imagine to be a flying carpet, it whisks them up into the air and off into a new adventure. Traveling on a kite, a tumbleweed, and a sailboat, the paper princess and her dog end up in a surprising place to make Lucy's fiesta quite memorable. Kleven's artwork consists of beautiful multi-media collages that bring alive her characters. "The Paper Princess Flies Again (with her Dog!)" represents both the desire of children to venture out and discover the world as well as the joy of returning to a warm and loving home (especially when there is a new dress and a crown or a new jacket involved). Granted, in the 21st century the idea of making a paper princess or anything else you can think of seems rather quaint, but that is probably why this book is so charming. Kleven works in so many varied textures, shapes and colors into her artwork (look at all the details in the two-page spread of the desert and the ocean) that you cannot imagine her young readers not being inspired to follow suit.

Published by Thriftbooks.com User , 15 years ago
This is the latest in the adventures of the paper princess and it's as wonderful as the other two. I love the character of the dog and how the princess' cheerful and brave optimism plays against his more timid nature. It's a great book to read aloud and my kids were totally taken in by the story and cheered at the ending. We also love the two earlier books and they've become favorites that we read over and over again (my two year old now "reads" them to himself). Each of the three books has a very distinctive plot so they don't suffer from being bland imitations of each other. It's a rare author who can take a character and expand her world as successfully as Elisa Kleven does. We can't wait for the princess' next adventure!

Published by Thriftbooks.com User , 16 years ago
I like all Elisa's Kleven's books. They are great stories. I really like this one because there is a dog in it.
Copyright © 2020 Thriftbooks.com Terms of Use | Privacy Policy | Do Not Sell My Personal Information | Accessibility Statement
ThriftBooks® and the ThriftBooks® logo are registered trademarks of Thrift Books Global, LLC