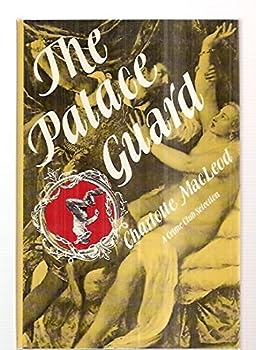 (Book #3 in the Kelling & Bittersohn Series)

Max Bittersohn has free passes to a concert at Madam Wilkins's palatial museum. Sarah Kelling knows she's shouldn't be there because of "the incident" that occurred. However, she and Max soon discover the palace's oldest guard lying dead among the hyacinths. Original.

Published by Thriftbooks.com User , 13 years ago
Book Club Review The Palace Guard by Charlotte MacLeod Our book club's book for July was THE PALACE GUARD, by Charlotte MacLeod. We chose this one for a couple of reasons. First, two of us had recently been to Boston, and we decided we'd like to try something set there (all of us have visited there at least a couple of times, so we thought we'd be able to tell if the book was true to the setting). Also, honestly, it is summer, and we were looking for something kind of short and light! This is the third in the Sarah Kelling/Max Bittersohn series of cozies that had their heyday in the 1980s. We chose this particular title because all of our local libraries had it, and some of us were able to get used copies on the Web, at a good price. Also, we have taken to making sure we don't read the first in any series. It's a little obstinate on our part; we have come to think that the mark of a good writer is one who can write well beyond a first or second book. Also, a little later in the series (we have discussed), the author often has a firmer sense of each character, which makes them easier to read in some ways. So, all of these factors led to THE PALACE GUARD. For those unfamiliar with the series, Sarah Kelling is a young (28 years old in this book) Boston Brahmin with the grandest of society connections. Like so many of the old money, she has fallen on very hard times and is basically a penniless widow. Rather than lose her grand old house on Beacon Hill, she converts it into an upscale rooming house and serve as landlady to a group of fussy Bostonians, each of whom is a bit of a caricature but still quite entertaining. Detective Max Bittersohn is one of the lodgers; and in this particular installment, the mystery begins when a guard at a local (and not very highly regarded) museum falls over the balcony at the museum to his death; and the death is followed by that of another guard not too long thereafter. As the two investigate, they find themselves drawn into a world of art forgeries and underworld art figures, as well as some shady dealings at the museum's highest levels. This is both a cozy and a caper; all is very elegant, high class, and elevated (though not in too snobbish a way) combined with our hero and heroine doing things like playing dress-up and going in disguise as part of their investigation. The mystery, as it turns out, is quite a good one, with clues nicely planted and the plot proceeding along nicely to a logical and satisfying conclusion, all in 180 tightly written pages. This caused us to remark on how really good mysteries often can get a lot accomplished in not too much space, and how so many of the books we've read could probably have been 50 or even 100 pages shorter. Even the most cynical among us (and there are a few) were charmed by the developing relationship between Sarah and Max, who are adult enough to admit their deepening emotional attachment without jumping into bed or even too much kissy-face.

Art Museum to Die For

Published by Thriftbooks.com User , 14 years ago
THE PALACE GUARD is the third in the Sarah Kelling and Max Bittershon series by Charlotte Macleod. Add a few more of Sarah's hilarious cousins to the mix and murder is fun. Sarah and Max attend a concert at the Wilkins Museum and while resting their ears from a well-meaning recital on a balcony, a body falls from the 3rd floor to the courtyard below them. Is the guard's death an accident while taking a leak in a famous fountain or murder. A second murder leads the landlady and her tenant on a infamous chase of a thief who has stripped the museum of 30 of its masterpieces and substituted excellent copies in their place. Sarah's cousin Brooks Kelling finds the love of his life in Sarah's boarding house and helps the duo solve the crime. This one has all the wit and verve you'd expect from Charlotte Macleod. Writing as a Small BusinessQualifying Laps: A Brewster County NovelNatchez Above The River: A Family's Survival In The Civil WarTravelersSins of the Fathers: A Brewster County NovelThe Bluegrass Dream: A Wilderness Adventure of Early Settlers
Trustpilot
Copyright © 2022 Thriftbooks.com Terms of Use | Privacy Policy | Do Not Sell or Share My Personal Information | Accessibility Statement
ThriftBooks® and the ThriftBooks® logo are registered trademarks of Thrift Books Global, LLC